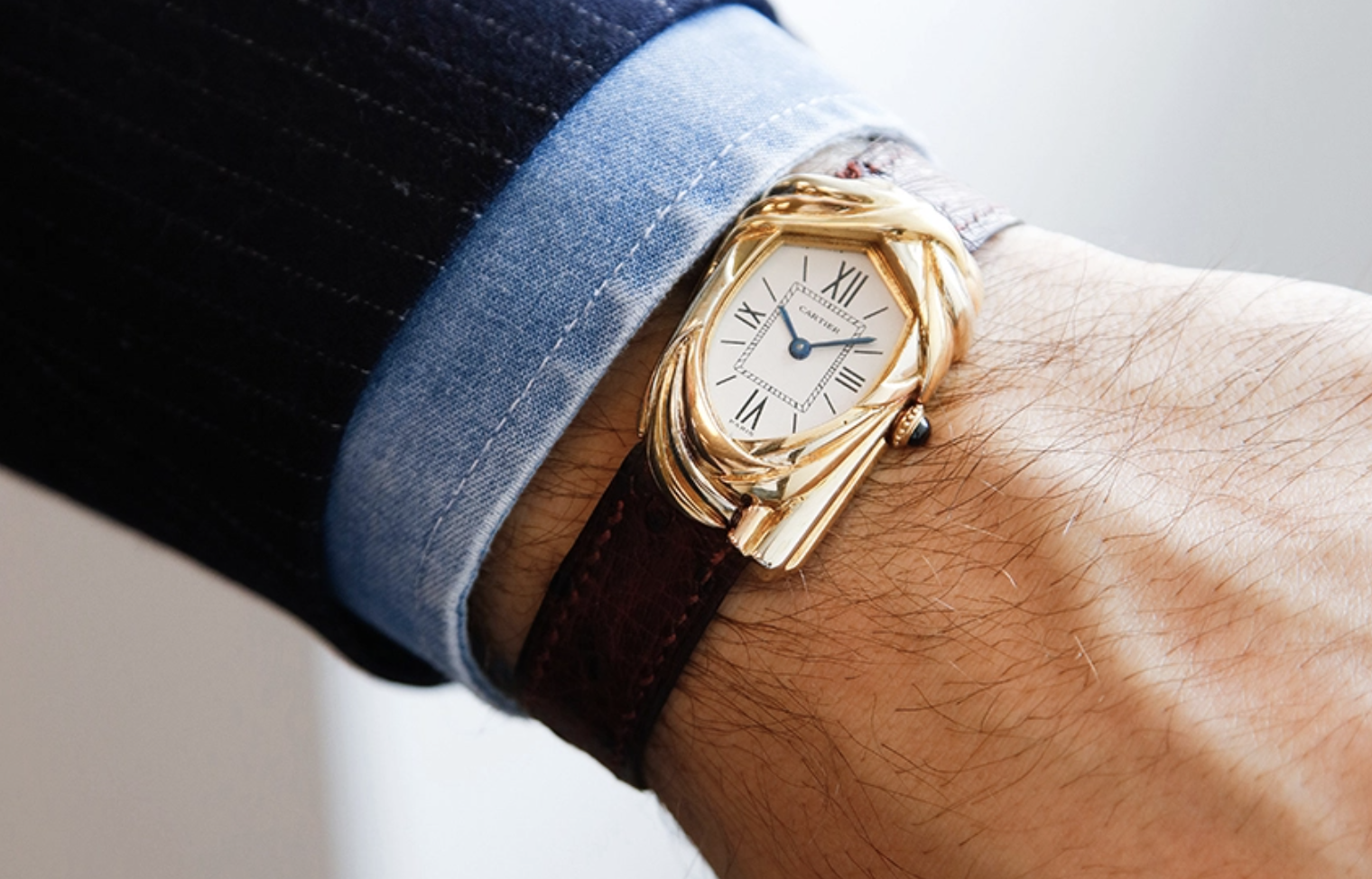 The Cartier Cheich was made in 1983 and has an intricate case shaped like the head coverings worn by Tuareg nomads.

A very special, 1-of-4 timepiece is headed to the auction block this spring.

Known as the Cartier Cheich, the rare timepiece was awarded to Belgian motocross racer Gaston Rahier for winning the 1985 Paris-Dakar Rally. The gruelling race started in 1979, demanding drivers complete a 9977-kilometre route from France to Senegal running through the Sahara Desert. The watch, with its striking gold case, was made in 1983 as an extraordinary prize for winners of the race’s Cartier Challenge, which required racers to win the Paris-Dakar Rally two years in a row within the same motoring category.

The high-stakes challenge was spawned from a collaboration between the event’s founder, Theirry Sabine, and Cartier’s then-CEO Alain Dominique Perrin. Shortly after the challenge was announced, Rahier—a 125cc motocross world champion—shocked the world by taking home the victory at the 1984 and 1985 circuits. Now, nearly 40 years after the driver’s Cartier Cheich was created, it will be auctioned off for the first time by Sotheby’s in Paris this September. 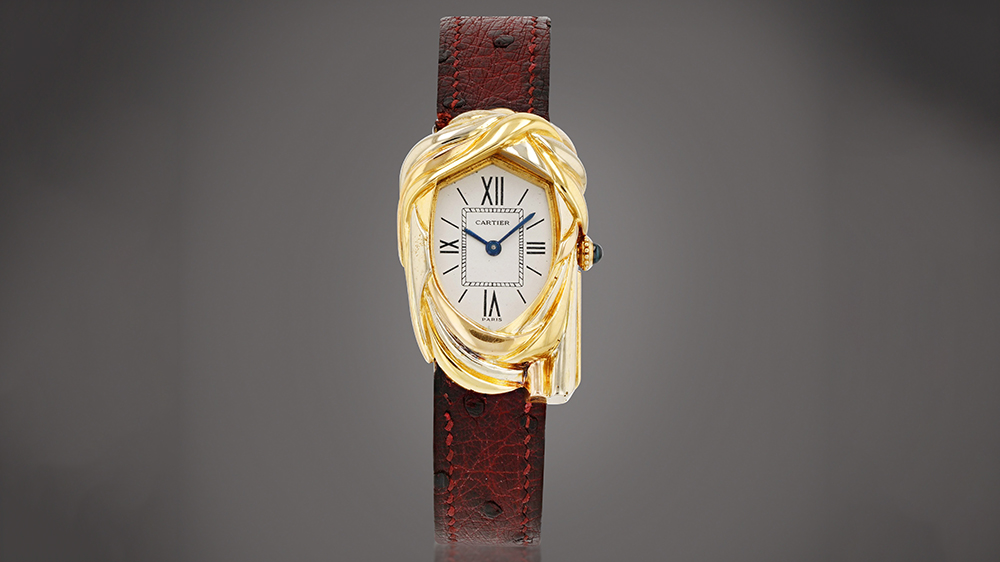 A front-facing view of the Cartier Cheich watch Sotheby’s

The watch’s case, designed by Jacques Diltoer, was created to mirror the race’s logo. The logo depicts the silhouetted face of a Tuareg nomad wearing a ‘cheich’ (or a ‘chèche’ in French). The traditional cloth covering was worn around the head as protection from the sun. This unique dial shape didn’t allow Cartier to implement bars screwed through the lugs to attach its straps. Instead, the back of the main case is carved to accommodate a fixture that holds the straps in place.

At the time, winners of the rally would typically receive a more traditional watch with an engraving on the back. This limited-edition release’s case, however, marked the occasion on its dial side. A rectangular rail track with baton and Roman indexes covers the watch face in classic Cartier Paris fashion. The Cartier Cheich is also one of the few watch models from the Swiss manufacturer to showcase the “Trois Ors” or trinity of gold that adorns some of the house’s jewellery. The case is fashioned from white, yellow and rose gold to symbolise love, friendship and fidelity.

The Cartier Challenge ended in 1986. Two additional models of the watch were created for potential winners and the fourth was offered to Sabine by Perrin. According to Sotheby’s, the watch may have instead wound up in the hands of Hubert Auriol, a famous French motorbike racer. But unless its whereabouts are confirmed, it is considered lost. 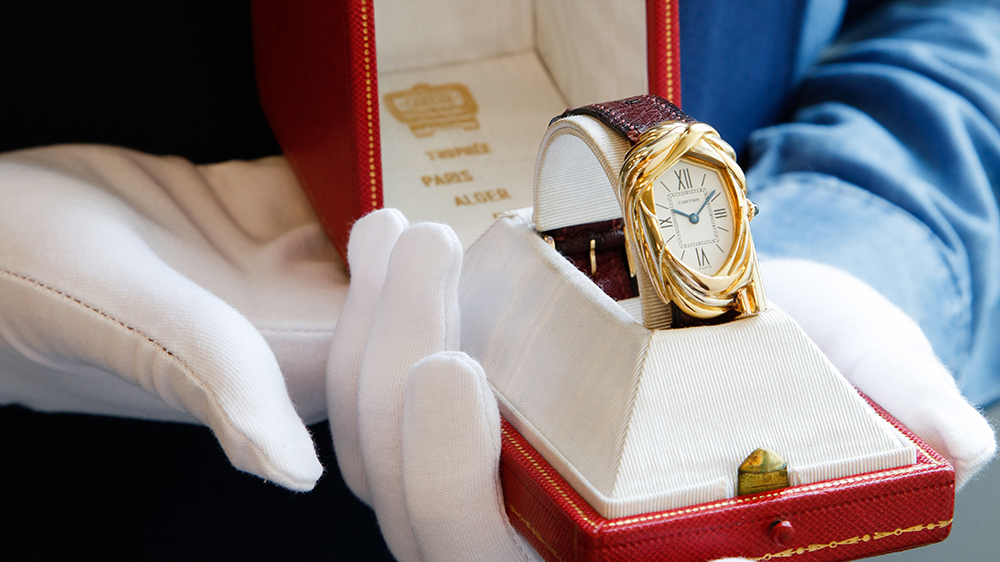 Rahier’s piece, however, is currently on display at the auction house’s Monaco gallery as part of a multi-category exhibition until Sunday, July 17. It will also be exhibited in Paris before it arrives at auction on September 30, where it is estimated to sell for between approx. $297,290 and $594,500 with its original box featuring signature Cartier red-and-gold detailing.

“As a true horological masterpiece, and for its association with the triumph and tragedy of the legendary Cartier Challenge, it has achieved near-mythical status and the market has been longingly waiting for its first appearance at auction,” says Benoît Colson, International Watch Specialist at Sotheby’s in a statement. “Nothing quite like it would ever be made again, and its reemergence now from the family of the great champion to whom it was awarded, like a holy grail, is any serious watch collector’s dream.”