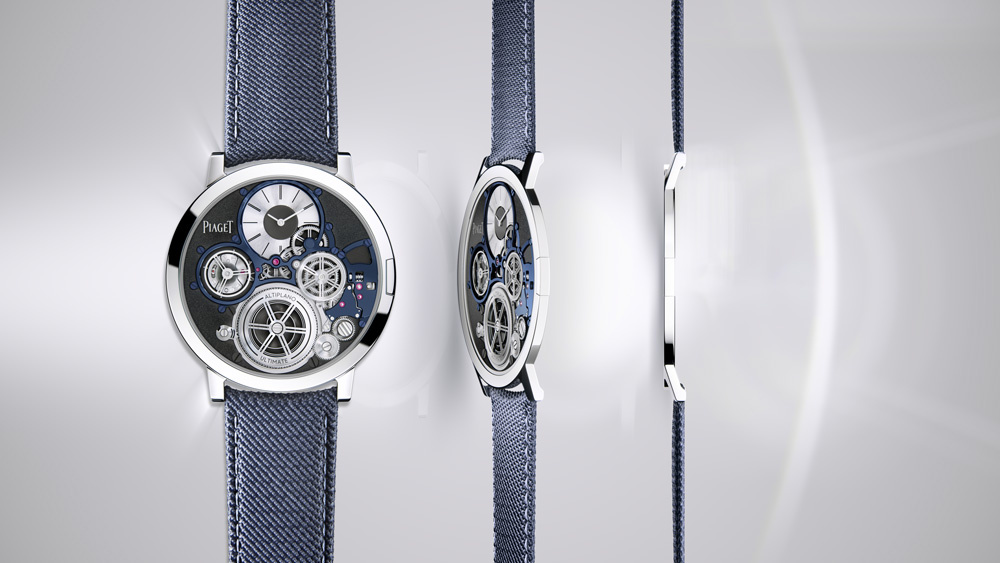 First introduced as a concept in 2018, the 2 mm-thick watch is now ready for the wrist.

There was a good chance it couldn’t be done. The trick to creating a record-smashing, ultra, ultra-thin watch is to reduce the components to the tiniest tolerances possible without losing strength and functionality. A 2mm-thick watch made of the wrong materials could easily snap in half while being strapped to the wrist. But Piaget has pulled it off in the new Altiplano Ultimate Concept watch. After it was introduced as a concept in 2018, Piaget managed to engineer a commercially viable version that is strong enough to be worn despite being the thickness of two credit cards stacked together.

How did they pull it off? Here are the steps to the secret formula:

– There is no main plate, just a caseback that is part of the case, all carved from one single block of metal.

– The metal in question is a newly developed, cobalt-based alloy that, while difficult to machine because of its hardness, is 2.3-times stronger than gold.

– Components were engineered to the smallest tolerances possible, including wheels reduced from the conventional 0.20mm thick to 0.12mm and a sapphire crystal that is normally 1mm thick pared down by 80 per cent to 0.2mm.

– The mainspring barrel does not have the usual cover or drum. Instead, it is mounted on a single, ceramic ball-bearing within the frame of the watch.

– The crown is engineered as a flat, telescopic mechanism that fits flush with the case band, in which the conventional sliding pinion clutch and crown wheel are substituted for a single, “infinite screw.” It is thus protected from unwanted shock, which can affect the movement.

– The dial’s off-centre position meant that a conventional, straight winding stem could not be used. Piaget, therefore, created a patented staggered stem, which dictated that the conventional hour hand be replaced by a revolving indicator disk (the minute hand works in the usual way).

– The dial is placed below the bridge in order to protect the hands from any knocks on the crystal.

The result is a needle-thin watch (a mere 0.12mm of cobalt separates the movement from the wearer’s skin) that, according to Piaget, is “tough enough to withstand everything from the level of G-Force experienced in an aerobatic jet to the force of a meteorite crashing to Earth.” Of course, the straps (alligator, blue rubber or blue textile), are also wafer-thin, with cobalt pin buckles. As a bonus, the watch is customisable: customers can choose the colour of the bridge and dial, the finish of the hands, the main plate and the straps. Piaget says more than 10,000 permutations are possible. The manual wound movement has a 40-hour power reserve. Price on request.

Piaget goes from micromechanical to glam with new gem-set models in the Limelight Gala collection. The watch, originally introduced in 1973, was inspired by the swinging ’60s and the jet-setting celebrities of the day, including Salvador Dali, Jackie Kennedy, Elizabeth Taylor, Andy Warhol and Sammy Davis Jr. The watch stands up to the party-wear standards of today, with its distinctive asymmetrical lugs that extend from each side of the case onto the bracelet.

The design lends itself to a swirl of gemstones surrounding the case. In the new models, the gems are set using what is called the serti descendu or cut-down technique, in which the gold is carved away to form claws and grooves that grip the stone, allowing the diamonds to be seen from the sides. The result is that more light can enter the pavilion or lower half of the gem and then be reflected out through the top of the diamond, which produces the gem’s brilliance. Normally, diamonds are set directly into the metal on a watch, which allows for very little light return.

The new models are set with diamonds and/or sapphires. There is a rose gold East-West oval version set with 57 diamonds totalling 4.80 carats, and a high-jewellery version set with 12.42 carats of round-brilliant and marquise-cut diamonds totalling 12.42 carats. A third is set with 237 diamonds. The dials are mother-of-pearl or translucent blue grand feu enamel over gold. There are also three limited-edition models with aventurine glass dials set with diamonds, and a one-of-a-kind piece with an Ethiopian black opal dial set with blue, yellow, orange and pink sapphires for a total of 158 gems totalling 13.15 carats.

The bracelets, which are hand-engraved, also play with light and shadows. They are made using a technique originating in the 1960s that involves engraving patterns that resemble motifs such as leather textures, ocean waves, frost, flowers, foliage, bark, snake scales and more. On the new models, Piaget uses the Palace Décor style, one of Piaget’s most iconic motifs, which requires hours of work. Some models are also available on straps.