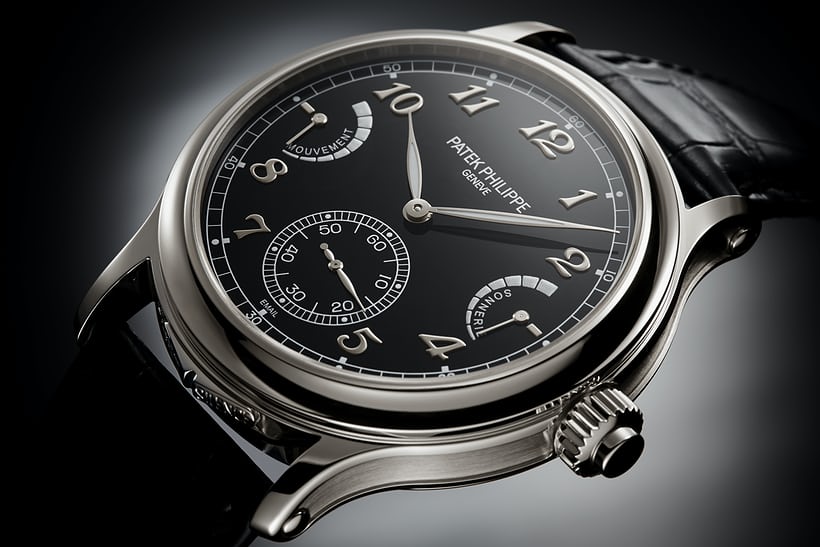 The Ref. 6301P takes cues from the Grandmaster Chime but in a new pared-down design.

Although Patek Philippe’s new platinum grande sonnerie Ref. 6301P seems comparatively less complex next to its predecessor, the Grandmaster Chime (the company’s most complicated timepiece in its current collection), its looks are deceiving. In addition to its grande sonnerie function, which automatically strikes the full and quarter hours, it also houses a petite sonnerie (which strikes only the hours), a minute repeater (which strikes the time on demand) and a subsidiary dial with jumping seconds. It’s also the first of this complication, at Patek Philippe, to feature an open caseback for a full view of its movement, the 703-part GS 36-750 PS IRM.

It uses the Caliber 300 base movement of the Grandmaster Chime, first introduced in 2014, which was the first grande sonnerie wristwatch from Patek Philippe. According to Philip Barat, the company’s head of development, work began on the Grandmaster Chime seven years before its introduction, but even then, the plans for the Ref. 6301P were already in the works. “It’s the first time we have a grande sonnerie in its purest form in the collection,” Barat told Robb Report. “It’s not a limited edition but, of course, it’s limited by its complexity. There are very few grande sonneries in the market, and this was a real missing piece for our collectors.”

The double-faced Grandmaster Chime Ref. 5175 featured 20 complications. For the Ref. 6301P, Patek Philippe removed the alarm, travel-time mechanism, the day and date, and repeater mechanism. The simplified structure allowed for the addition of a jumping seconds counter at 6 o’clock—a personal request from Patek Philippe CEO Thierry Stern. “The base movement for the Grandmaster Chime Ref. 5175, didn’t have the little seconds, because there were other indications in its place, and to have the Grandmaster Chime with the dual face, we couldn’t have the seconds at 6 o’clock,” says Barat. “It was turning on the reverse side.”

Of course, in watchmaking, even small details such as these are extraordinarily difficult to execute. To implement the function, the mechanism of the Ref. 5275 Chiming Jump Hour (with jumping displays for the hours, minutes, and seconds as well as an automatic strike at the top of every hour), also introduced in 2014, was used. The seconds jump one step per second. Barat likens the movement to a quartz timepiece, instead of the smooth run of a seconds counter on most mechanical watches. “It’s a very particular way to have a seconds in that kind of complication,” says Barat. “We thought it was smart to use one of the patents that we had on the Chiming Jump Hour and put it on this watch.”

But what will really resonate with collectors, of course, is its crisp and loud chiming—intensity of sound was another Stern mandate. The piece has three hammers and three gongs, as opposed to the two hammers used in the Grandmaster Chime, because it produces a melody that plays in order of sound from medium to high to low with each quarter playing the same tune. Each has the same shape and weight so that they ring at the same volume.

The minute repeater is activated via the pusher in the crown, while a slide located at 6 o’clock activates the other chiming features. The middle position activates the grande sonnerie mode; the left activates the petite sonnerie; and the right side places the watch in silent mode. The minute repeater can be activated in any mode. A bidirectional crown winds the watch and sets the time. Clockwise winds the base movement, while counterclockwise winds the striking mechanism. Pulling the crown out allows the wearer to set the time.

A full wind allows for an impressive 72 hours of power reserve for the base movement (indicated at 9 o’clock)—the average on this kind of complication is around 48 hours—and 24 hours of run time for the sonnerie. “On the movement, there is a big bridge on the left,” says Barat. “This is the barrels bridge, so we have two couples of barrels—two for the base movement and two for the sonnerie. That’s the reason we can have a power reserve for the movement of 72 hours.”

The anti-reflective sapphire crystal caseback (the watch also comes with a solid platinum caseback) is positioned close to the movement to allow for a superior view of the caliber. It also reveals a fusée, the motor of the grande sonnerie, beneath the brand’s Calatrava Cross symbol and shows off the governor, which is used to regulate the sonnerie’s speed. “When there is one strike, two strikes, three strikes at the same time, the energy is controlled by the speed of the governor,” says Barat. “This is the first time we can see all of the governor. There is no bridge to hide it.” You can also see the three hammers in action as they create the piece’s melodic ring.

The finishing on the movement is, as you would expect, of the highest level. It features Côtes de Genève decor, along with a bridge with multiple polished angles. Careful attention was paid to the now visible governor, which also has smoothed and polished finishes. “We also have a particular balance bridge that is only fixed with one screw and one heel,” says Barat. “But for aesthetic and technical reasons, if you have only one heel the place is too small and the look of the bridge will be not very nice. So, we have a cross bridge, which looks better.” No detail was spared.

Another unusual feature on this haute-horlogerie piece is the luminous coating used on the hands—a feature typically found on sports watches rather than ultra-elite dress watches. The very notion of a chiming watch negates the need to read the time in the dark, but Patek Philippe didn’t want to leave any base uncovered. “Sometimes we say, ‘Why do we even put the hands on a minute repeater and grande sonnerie? We don’t need it, in fact,” joked Barat. But Stern’s philosophy is that a piece must function in every occasion, which means that if you didn’t want to wake someone sleeping next to you at night to check the time, you could still read the hour by the luminescence of the hands. “We want the watches, however complicated they are, to be worn, not to be in a safe,” says Brat. “The watch should be wearable at any time. Now people wear their minute repeaters even if they are going to yoga or pilates.”

You would be misguided if you thought this was said in jest. Barat says the company really does have clients who wear their repeaters to workout. We would be hard-pressed to believe it, if another collector hadn’t once told us he goes surfing in his Patek Philippe (that watch, however, was fortunately not a grande sonnerie otherwise it would no longer be in operation). “Watches are made to be worn,” says Barat.

If only it was that simple.

The Ref. 6301P is price upon request, but grande sonneries are well into the six-figures or higher.