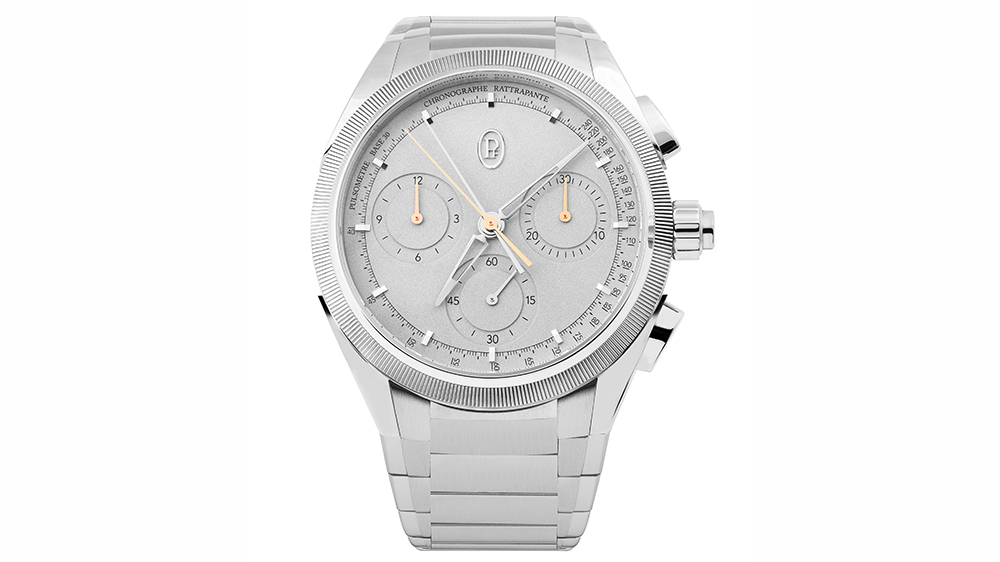 Out in November, the new line’s star piece is a monochromatic 42mm by 15mm Split Seconds Chronograph.

“My role in this moment is really to shape and to define, in a very precise way, what is the soul of Parmigiani,” said Guido Terreni to Robb Report shortly after being appointed the brand’s CEO, in January. The soul itself is not in doubt—it comes directly from founder Michel Parmigiani, long considered one of the greatest living watchmakers but its definition could use some work: Parmigiani Fleurier watches have at times lingered in the shadows of their contemporaries. Terreni plans to change that. Having spent the past two decades building Bulgari’s watch division into a respected horological force with six world records to its name under his stewardship (it now holds seven), he aims to articulate the spirit of the Parmigiani brand while simultaneously revamping its image, both physically and philosophically.

Out in November, a new line of Tonda PF models showcases a sleeker, more minimalist vibe that sacrifices none of the company’s artisanal know-how. The collection is a more sophisticated follow-up to last year’s Tonda GT and Tondagraph GT models, which charted sporty new territory for clients looking for an everyday watch. The star is the handsome 42mm by 15mm Split Seconds Chronograph—numbered and limited to 25 pieces (approx. $231,000 each)—which is accurate to one-tenth of a second and features a dial and case dressed in monochrome 950 platinum. On the flip side: an extraordinary and ornate Caliber PF361 movement, with a main plate and bridges made of solid gold in an open-worked, satin-finished and bevelled design. Collectors may also be pleased to see that the logo’s been changed to a more palatable “PF” at 12 o’clock in lieu of the company’s full name, which has often drawn comparisons to a certain famous cheese. More sports, less dairy and a tight focus on the core: It’s a resolution that works for watchmakers, too.