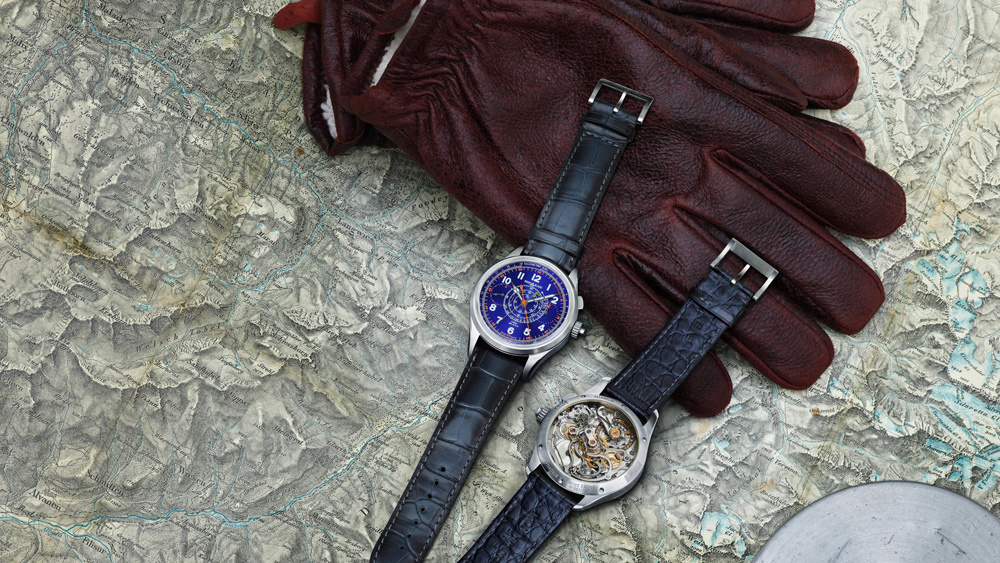 The split-seconds chronograph is limited to just 100 pieces.

The undeniable highlight of Montblanc’s recently unveiled watches for 2020 is the new 1858 Split-Seconds Chronograph—a true collector’s timepiece that shows what heights the company is willing to climb to prove its watchmaking prowess. This is a watch for movement junkies with an appreciation for old-school watchmaking. The purchase of the historical Swiss watch manufacture, Minerva, in 2006 by Montblanc’s parent company Richemont has allowed the brand to become a player on the horological map and pieces like the Split-Seconds Chronograph really show off what the manufacture is capable of.

Last year, the company came out with a similar model outfitted in a bronze case with a black lacquer dial, but now the company is dressing it up in a grade 5 titanium case with a striking blue-hued grand feu enamel dial. It’s an unusual dial finish for a sports watch. Today most enamel dials are found in dress watches, but here it is a reflection of history. “All of the company’s counters and stopwatches from the 20th century are in grand feu enamel,” says Davide Cerrato, managing director of Montblanc watches. “So it’s a tribute to our history and our heritage.”

The process requires taking a plate of gold, dusting it in enamel powder, and heating it in an oven at an extreme temperature of 800 degrees Celsius and then cooling it. The heating is done in a cycle of layers to achieve its distinct gradation of blue, playing with different heights in the various layers. It’s a fragile process, that when done incorrectly, could result in cracks. If done properly, it will fix forever and should never fracture. “We still have, in our manufacture in Villeret, our museum with hundreds of grand feu enamel dials that were made in very early years of the 20th century,” says Cerrato. “They are still in pristine condition, not a single wrinkle.”

Beyond its special material, the dial features a rare combination of a snail-shaped tachymeter scale in the centre and a telemeter scale on the internal flange, mimicking a historical Minerva military monopusher chronograph from the 1930s, which served as inspiration for the piece. A tachymeter reads the speed of a moving object, such as a car, over a known distance. The wearer starts the chronograph and then stops it as soon as the car passes a select finishing point. The number indicated by the hand reads the speed in kilometres or miles per hour. A typical chronograph’s tachymeter scale measures up to one minute, but this piece can measure a length of up to three minutes.

The telemeter, on the other hand, measures the distance of a visible or audible phenomenon. The most common example is a thunderstorm. Start the chronograph when lightning is seen and then stop it when you hear thunder and the telemeter hand will give you a read in kilometres to tell you the distance of the storm. It is based on the speed of sound travelling through the air, which is about 340 metres per second.

The watch’s rattrapante, or split-seconds, is a complex function that allows the user to time two more time intervals simultaneously. Here it is represented by a central chronograph second hand and a split orange second hand, along with a chronograph minute counter at 3 o’clock.

It can be seen in the centre of the sapphire crystal caseback, which gives a view of its extraordinary MB M16.31 caliber, made entirely in-house and equipped with 50 hours of power reserve. Here is where the magic lies—it comes finished to haute horlogerie standards for some serious eye candy. “You will find Côtes de Genève finishing on all of the bridges and Cloisonné finishing on the barrel. All of the bridges have polished bevels that are handmade,” says Cerrato. “Many of those polished bevels are inner corners, which shows that it’s absolutely made by hand, because when you have a very sharp corner, the only way which you can finish your finishing easily is by hand.”

At 44mm by 14.55mm, it is a very large timepiece but it’s the right size tableau for the artistry of the Minerva movement to be on full display. The approx. $55,700 timepiece is available on a blue Sfumato alligator strap, also made by hand by Pelletteria in Florence, Italy.

Montblanc released four other watches for 2020 including an 1858 Geosphere with a new blue dial (approx. $8,900), the company’s bread and butter model, plus two sharp 1858 Monopusher Chronographs at 42mm by 14.7 mm for just approx. $8,600 in either steel (on a strap or bracelet) or bronze (which will develop a vintage-looking patina over time and comes on a handmade French Nato strap), an 1858 Automatic 24H at 42 mm by 11.2 mm in brushed steel with a bronze alloy bezel (approx. $4,680) with a single hand indicator and a map of the Northern hemisphere and the 24 meridian lines.