McLaren Teams Up With Richard Mille

The RM 40-01 Automatic Tourbillon McLaren Speedtail will be limited to just 106 examples.

One of the luxury world’s sexiest partnerships just got a little more exciting.

Richard Mille and McLaren have announced their latest collaboration, the RM 40-01 Automatic Tourbillon McLaren Speedtail. Touted as the Swiss watchmaker’s most “extreme” timepiece yet, the dazzling watch will be limited to as many examples as the high-powered supercar it’s based on—106.

Having gone into production last year, the McLaren Speedtail is considered the British automaker’s most technologically advanced road car yet. The futuristic coupé features a hybrid powertrain capable of producing a jaw-dropping 798kW and 1150Nm of twist. The three-seater can also accelerate from zero to 300km/h in just 12.5 seconds and has a top speed of 400km/h.

That’s an awful lot to live up to and, sure enough, the RM 40-01 Automatic Tourbillon McLaren Speedtail sounds like something special. The watch, like the supercar, features a teardrop design that took 18 months, and five prototypes, to get just right. The case consists of 69 individual parts. It’s wider at 12 o’clock than at 6 o’clock, has a titanium bezel and caseback, as well as a case band made from Richard Mille’s Carbon TPT. Rounding out the package is a special, asymmetrical strap with an orange accent at 6 o’clock. 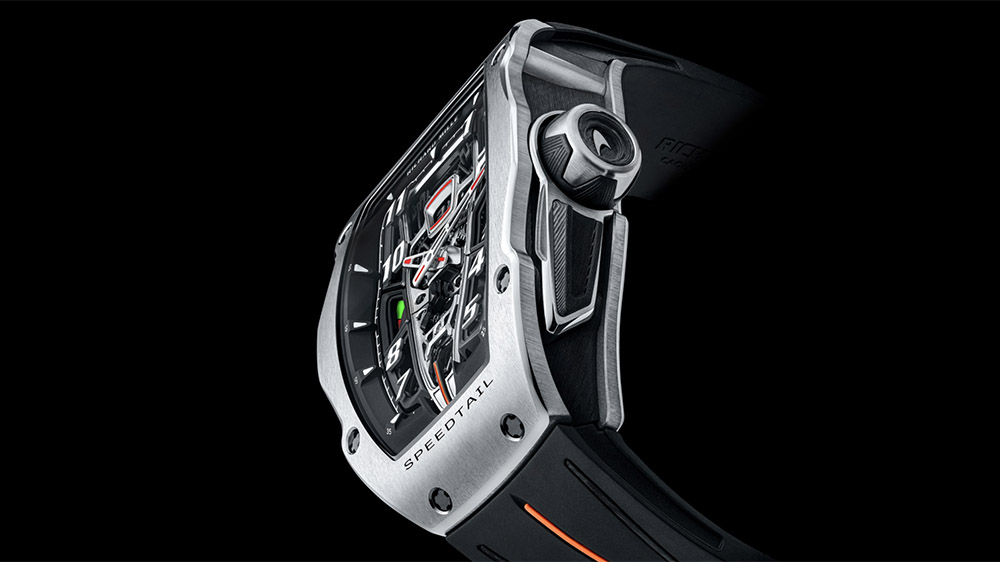 The horological “engine” that powers the watch is just as impressive, supposedly taking over 8,600 hours to develop. Filling all the available space within in the case, the in-house CRMT4 movement features 37 jewels and Grade 5 titanium bridges, the bridge screws, the baseplate and rotor core. The piece also features a power reserve indicator at 9 o’clock, as well as oversize date and function selector complications, all of which are a first for one of the brand’s automatic tourbillons.

“When it came to the RM 40-01, we had considerable input in sharing the highlights of the car and the philosophy behind it,” McLaren Automotive design director Rob Melville said. “With the Speedtail, we set out to produce a car that had an artistic quality to it. That has certainly come through in the watch, which beautifully mirrors the many various details of the Speedtail in its finish, materials and its uncompromising design.”

The two companies have yet to announce pricing info for the RM 40-01 Automatic Tourbillion McLaren Speedtail. Based on past collaborations, like the RM 11-03 McLaren Automatic Flyback Chronograph, we’d expect the cost to be steep. That watch launched at approx. $245,098 and was only limited to a run of 500.