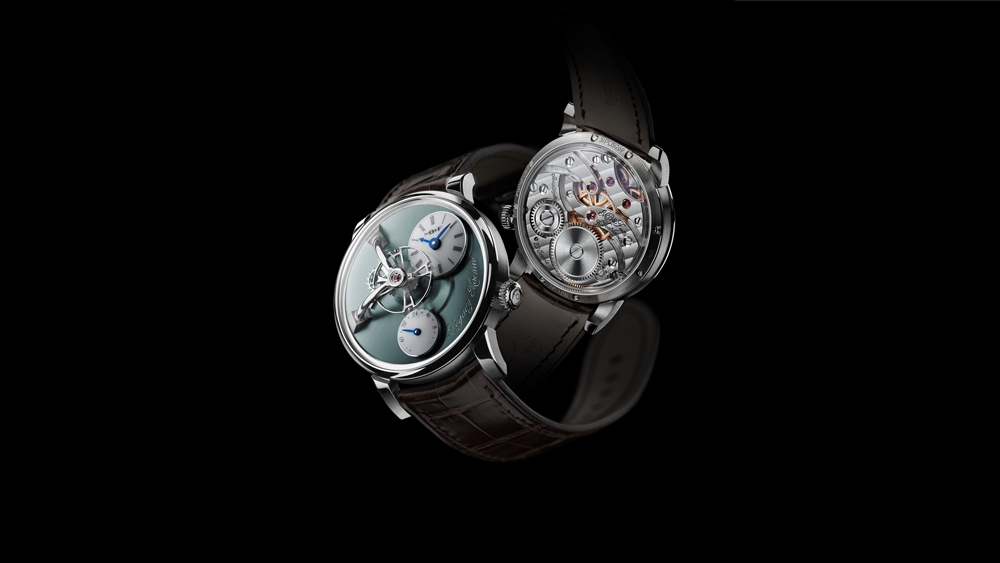 The LM101 Palladium is fronted by a sunray dial in a beguiling shade of blue (er, green?!).

The easiest-to-understand series in MB&F’s assortment of mostly avant-garde timepieces is the Legacy Machine collection, which was introduced in 2011 based on an interesting conceit: The pieces are meant to look like MB&Fs if the brand existed 100 years ago. At first glance, the model’s round case suggests a classic wristwatch. Upon further investigation, however, the dramatic “flying” balance wheel suspended beneath its domed crystal defies any notion of conventionality.

But fans of the Legacy Machine No. 1 and its 5-year-old little brother, LM101—the first MB&F calibre to be entirely conceived and designed in-house—already knew that. What’s new is that the LM101 just got a shiny new exterior. The LM101 Palladium marks the first time the brand has used the rare platinum group metal.

Its silvery-white cast sits in stark contrast to the model’s beguilingly colourful sunray base plate, whose hue is a hard-to-pin-down shade of blue (or green?) described in French as “vert d’eau” (sea green or aquamarine).

“First, I thought it was greenish-grey, then greyish blue, then bluish-green,” MB&F founder Max Büsser wrote on an Instagram post featuring the model. “At the end I was totally confused but even more in love with the colour of our new palladium LM101 baseplate. Palladium is as difficult to machine as platinum (it is of the same family) but lighter in weight and today even more expensive. We will never use this material again on a Legacy Machine 101 so the 18 pieces of this limited edition are to be treasured…”

If that doesn’t inspire MB&F’s fans to action, consider the LM101’s other attributes: Housed within the classic 40 mm case is an in-house movement signed by the celebrated Finnish watchmaker Kari Voutilainen, whose 18th- and 19th-century style finishing lends the contemporary wristwatch a classic pedigree.