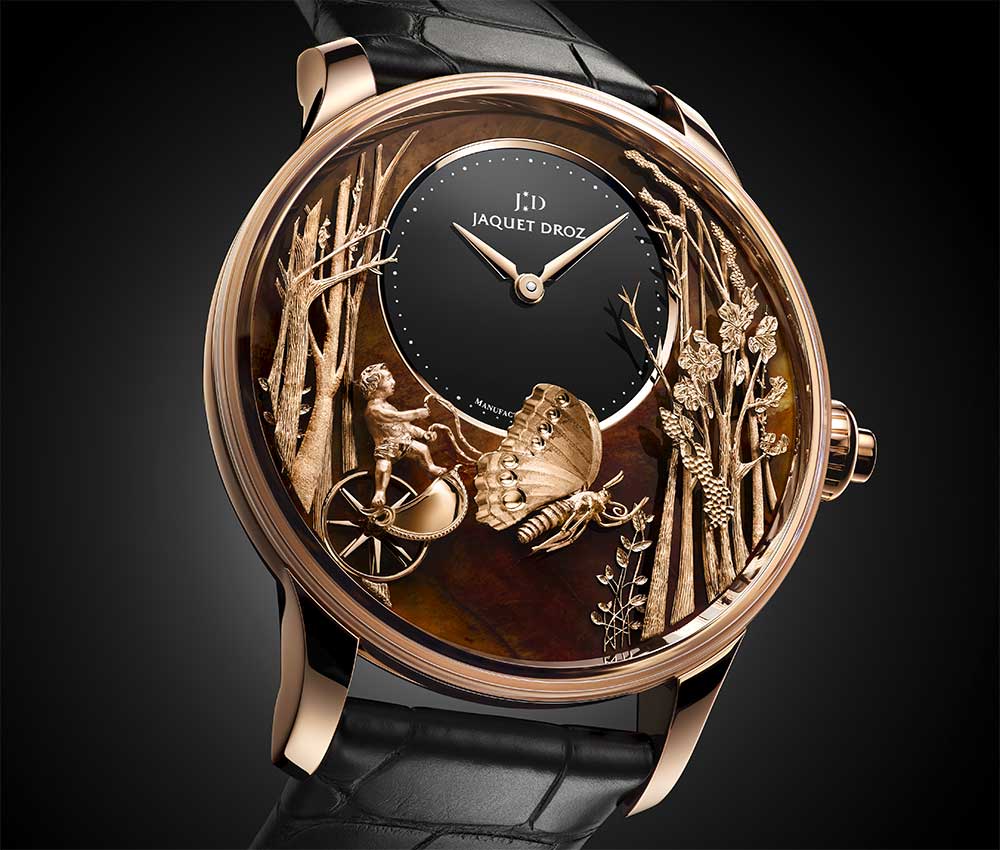 Talk about the butterfly effect.

Picture a golden cherub driving a golden chariot pulled by a golden butterfly through a golden forest. Then picture this richly gilded scene framed against the backdrop of a 150-million-year-old slice of reddish-brown petrified wood.

This fantastical tableau, rendered within the confines of a 43mm 18-carat red gold case with a black onyx subdial accented with 18-carat red gold appliques, is inspired by the 1774 sketch Le papillon conduit par l’amour (“Butterfly driven by love”). The drawing of Cupid driving a chariot was sketched by The Draughtsman, an automaton created by Henri-Louis Jaquet-Droz, son of brand founder Pierre Jaquet-Droz.

In the latest version of this classic timepiece, the Loving Butterfly Automaton is juxtaposed with the kind of extraordinary material fans of the Swiss brand have come to expect: The dial is made of Chinchilla Red, a mineral found in the eastern part of Australia. The extremely dense material is thought to have formed when volcanic ash settled on fir trees that were then swept up by lava. Jaquet Droz artisans spend hours simply smoothing its surface.

The scene depicted on the multidimensional and multihued dial springs to life when the crown-push button is triggered, which you can see in the video above, and the chariot wheel and wings start to move. The time-telling owes its accuracy to Jaquet Droz 2653 AT1, a self-winding mechanical movement.

The version with the Chinchilla Red dial comes in just 28 pieces, each priced at $198,000. Jaquet Droz announced in March that in light of the fires that devastated Australia earlier this year, a portion of sales will be donated to associations dedicated to reforestation and the preservation of endemic species such as “Plant a Tree for Me” or “One Tree Planted.”

In the past, the Loving Butterfly Automaton has featured dials made of onyx, jade, serpentinite, jasper and meteorite. As of this spring, it also comes in an opal dial version, available in 18-carat red or white gold, price upon request.