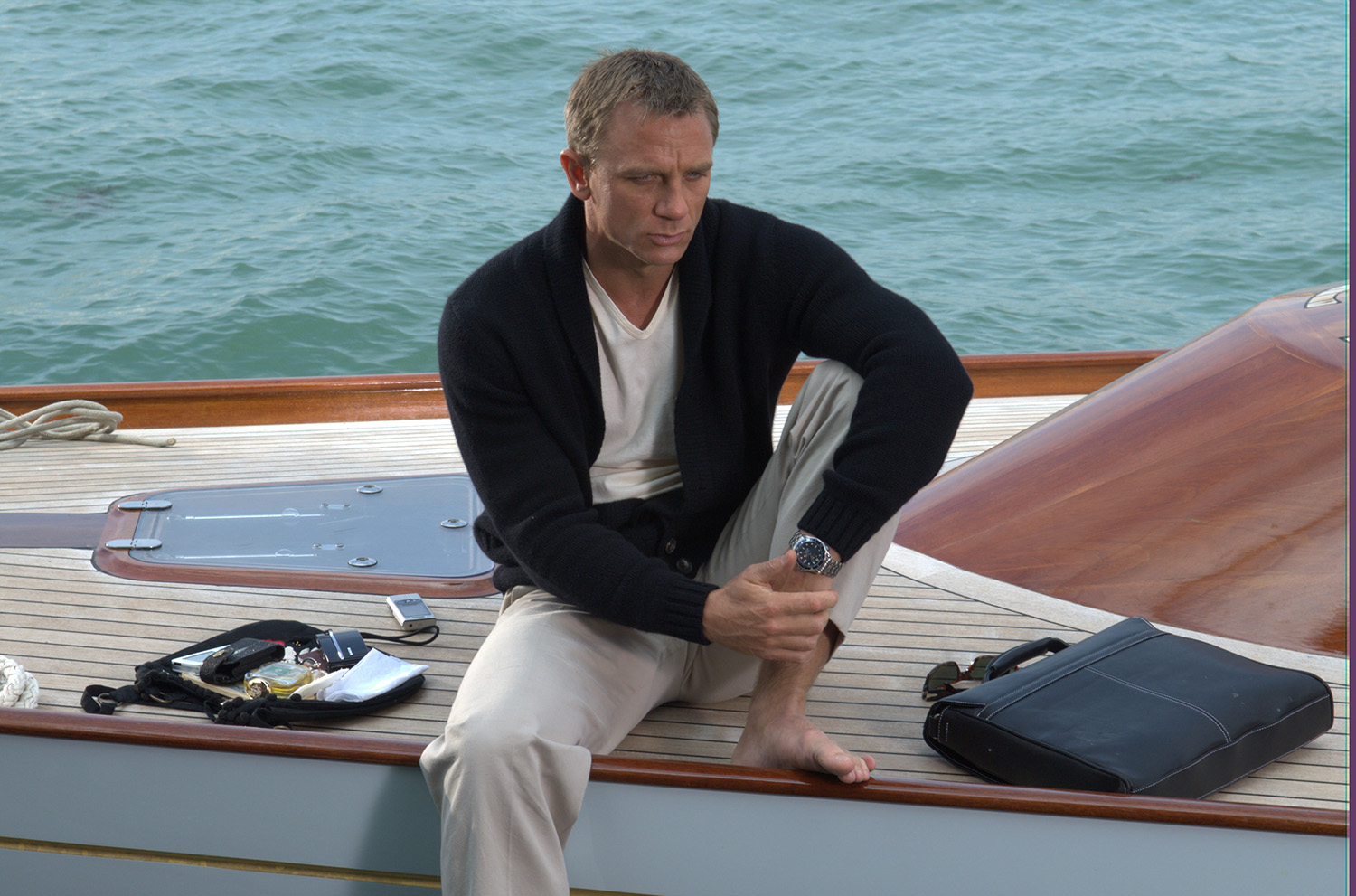 James Bond And The Science Of Fiction

In many Bond movies, 007’s mind-blowing timepieces save the day. But are they really so far-fetched?

There have been many characters over the years touted as the “real-life” James Bond, a list usually drawn from the various spies and adventurers that his creator, Ian Fleming, met during his time in Naval Intelligence during WWII. Equally, there are several contenders for being the inspiration behind Q, the boffin who heads up Q (for Quartermaster) Branch – Fleming’s fictitious version of what is now known as Her Majesty’s Government Communications Centre – the department that provides 007 with his famous gadgets.

My favourite of these candidates for the prototype Q is Christopher Clayton Hutton, of the little-known branch of military intelligence called MI9. Its role in WWII was to help downed aircrew and escaped prisoners of war get back to the UK, using a series of escape lines across Europe, and Hutton’s job was to provide the equipment to assist in what was known as Escape and Evasion, a phrase which accurately describes much of Bond’s activity during a mission. So Clutty, as he was known, created maps concealed in playing cards; compasses hidden in buttons or collar studs; powerful flashlights disguised as bicycle pumps; multi-function ‘escape knives’, tiny radios and a cigarette lighter with a concealed camera inside.

Miniaturisation was his speciality and he would have relished the world of Bond, where various aids to Escape and Evasion have to be incorporated into equipment such as 007’s trusty Omega watches. But could even a maverick genius like Clutty make the spy’s various Seamasters function as shown on screen, or are they just a fantasy product of the scriptwriters’ imagination? With an Omega about to play a pivotal role in No Time To Die, it’s as good a moment as any to look at the practicality of the world’s most versatile, and sometimes lethal, timepiece, and to give them a ‘Clutty Rating’ (CR) for the likelihood of the great gadget man being able to duplicate them.

Over the past 25 years, Bond has frequently turned to his Omega to get him out of a tight spot by making something explode. In GoldenEye (1995), 007 uses the Seamaster’s HRV (Helium Release Valve) to initiate the timing sequence on several limpet mines. This is the watch acting as an on-off switch for the mines – which means Q has installed an actuating transmitter in the Seamaster. The limpets never actually blow – spoilsport Alex Trevelyan (Sean Bean) uses another click on the HRV to stop the countdown.

All this is eminently feasible, even with the limited space within an Omega. Researchers at Columbia University in the U.S., for instance, have built what they describe as the smallest frequency-modulated (FM) radio transmitter ever. Based on a graphene nanoelectromechanical system (NEMS), the microscopic device oscillates at a frequency of 100 MHz and, with a tiny antenna, could broadcast an activation signal. Even without using nanotechnology, traditional UHF transmitters can now be produced that are not much longer than a grain of rice.

No matter what type of signal generator Q opts for, a battery needs to be included to provide the power for the transmission. But this is also achievable – the University of California is working on gold nanowire batteries, which use rechargeable filaments thinner than a human hair as an energy sink. More practically, the Jenax company has created a thin, foldable and bendable lithium-ion battery called J.Flex. It isn’t difficult to envisage one of the latter fitting snugly against the inside of the caseback of a Q Branch Seamaster.

Lasers have a long association with James Bond, ever since Goldfinger (1964), when 007 was “expected to die” while being threatened with being split in two by a giant industrial CO2 laser.

By the time of GoldenEye (1995), the laser had shrunk enough to be concealed in 007’s Omega Seamaster. Bond uses the light beam to cut a very neat panel out of the steel floor of rogue 00 agent Alex Trevelyan’s armoured train and escape before the whole lot blows. The laser-watch reappears in Die Another Day (2002), with the light lance emerging from the crown, operated by pressing the face of the Omega, and is deployed by 007 to cut a hole in the ice outside of Gustave Graves’ frozen palace (admittedly an easier task than burning through metal floors).

Ridiculous? Well, German prop-maker and ‘laser hobbyist’ Patrick Priebe has succeeded in fitting a 1,500 milliwatt laser into a wrist-worn case. The beam is capable of puncturing balloons, scorching walls and cutting through duct tape. Burning steel?

Not so much. You need at least 300 watts to cut metal. However, it will ignite matches, and it doesn’t take much to imagine a Bond scenario where that would come in handy. Like 007’s version, Priebe’s laser-watch also tells the time – using a very crude LED digital display. A handsome Seamaster it is not. Despite companies such as Boeing and Lockheed Martin

working hard on miniaturising laser guidance and weapons systems, and the development of tiny (but weak) nano-lasers, it is likely that this is one 007 gadget that will remain in the realm of fiction for the time being.

In the pre-credits sequence of Die Another Day (2002), 007 lifts a tray of diamonds from an attaché case and underneath are blocks of C-4 explosive. He removes the Seamaster’s HRV, which has a small shaft or pin attached to it, and sticks this into the C-4. So what is it? I turned to Warrant Officer Kim Hughes, an ATO (Ammunition Technical Officer, bomb disposal expert in non-army parlance), who won the George Cross for his service in Afghanistan, to explain.

“Military grade explosives such as Semtex or C-4 are relatively insensitive compounds. They need a ‘kick’ to enable the chemical reaction to take place, which results in a rapid release of energy or explosion.”

So the detonator pin that Bond buries in the C-4 would contain a small amount of ‘primary’ explosive, triggered by heat from an electrical circuit. In the film, Bond initiates the blast by twisting the Omega’s bezel, which would send a signal to the HRV pin, causing a current to flow to a small wire. This instantly turns white-hot (think incandescent light bulbs) setting off the detonator charge, which in turn gives the energetic shock needed to make the main lump of C-4 go up. Is it realistic? Hughes agrees the principle is sound enough.

An example of 007’s watch containing both primary detonator and secondary explosive is found in Tomorrow Never Dies (1997), which also features an X-ray of the Seamaster in the credits, showing its elegant inner workings in all its mechanical glory.

On board the megalomaniac media tycoon Elliot Carver’s stealth ship, Bond slides a small, flat unit from the side of his watch. This has a coin-sized explosive charge at its centre, with a detonator contained in the outer casing.

Bond assembles an IED – Improvised Explosive Device – by placing a hand grenade, with the pin removed, in a glass jar. The fit is tight enough to stop the safety handle of the grenade flying off. Bond tapes the portable micro-bomb to the jar. Later on, Bond transmits a signal, using the Omega’s bezel, to the unit.

The small amount of plastic explosive in the gizmo is just enough to shatter glass, so the jar breaks open. This allows the grenade handle to release, causing a conflagration that ignites the drums of flammable liquid that all super-villains carelessly leave lying around. Simple.

A grappling hook and cable fired from a pistol appeared in the opening sequence of GoldenEye during the dam dive, but by The World Is Not Enough (1999), the device was incorporated into Bond’s Omega (along with ultra-bright micro-LEDs which provide illumination when Bond is stuck inside an inflatable anti-avalanche sphere). This piton system really would have been a challenge to Q Branch. But as ATO Kim Hughes pointed out to me, there is already a weapon that fires hooks trailing a cable: the taser.

Tasers use compressed gas to deploy the lines down which the electric shock travels, but shrinking the cylinders enough to fit into a Seamaster is quite an undertaking. However, ultracompact micro-and pico-cylinders do exist and are used in medicine in self-injection devices and inhalers. Whether they would generate enough pressure to drive a piton in concrete, however, is doubtful.

The BolaWrap100 uses a blank .380 cartridge as a propellant and the tether exits the weapon at 200m a second, faster than the human eye can see clearly. The drawback for Bond and his

Omega? The BolaWrap is the size of a mobile phone. Something tinier is needed. Enter the ANT, or actuating nano-transducer, which releases remarkable amounts of energy from gold particles which fly apart when hit by a beam from a miniscule nano-laser.

“It’s like an explosion,” said Dr Tao Ding from Cambridge’s Cavendish Laboratory. “We have hundreds of gold balls flying apart in a millionth of a second when water molecules inflate the polymers around them.” Such an explosion could be used to propel out the barb, while the same technology could be harnessed to produce an ANT “engine” to power the rotating bezel that rewinds the line attached to the hook.

And the cable needed to support the weight of 007? A 2020 update on the Omega would not use high-tensile steel (too bulky to incorporate in the watch) but rather a new material, such as Dyneema (15 times stronger than steel) – or perhaps one of the materials that laboratories are currently experimenting with, such as a filament that mimic the properties of spider silk in terms of tensile strength. The US Army, for example, is testing fibres called ‘Dragon Silk’, produced from modified silkworms, which are strong enough to be woven into bulletproof vests.

The Q Branch Omega watches were retired from active duty (other than for telling the time) for the first run of the Daniel Craig movies, but in Spectre (2015) one watch was up to its old tricks. When he is tortured by Blofeld, Bond manages to remove his NATO-strapped Seamaster and spins the crown, so that the hour markers flash red. This initiates a countdown that culminates in a blast that blows Blofeld off his chair and causes significant facial damage to the villain.

Kim Hughes pointed out that it would be difficult to pack enough explosive into the Spectre watch to cause such a big bang.

However, he did concede that modern hard PBX (Plastic Bonded Explosive) could be machined or cast – complete with engraving – to replace entirely the caseback of the Seamaster (it would, he adds, also need a detonator and a battery to be fully operational).

He reckoned this might be enough to, say, blow off a hand. Whether one would want to walk around all day wearing such a timepiece is debatable. Of course, he is assuming that Q wouldn’t have access to types of PBX more powerful than those commercially available.

AND FOR ITS NEXT TRICK?

A lightweight titanium Omega Seamaster Diver 300M chronometer will certainly play a part in the next 007 outing, No Time To Die. Rumour has it that Q Branch has been hard at work creating new surprises to incorporate into Bond’s trusty timepiece. For the moment, exactly what those surprises are is under wraps. Time will tell.

The latest James Bond adventure, No Time To Die, is out in cinemas Thursday, November 11. 007.com