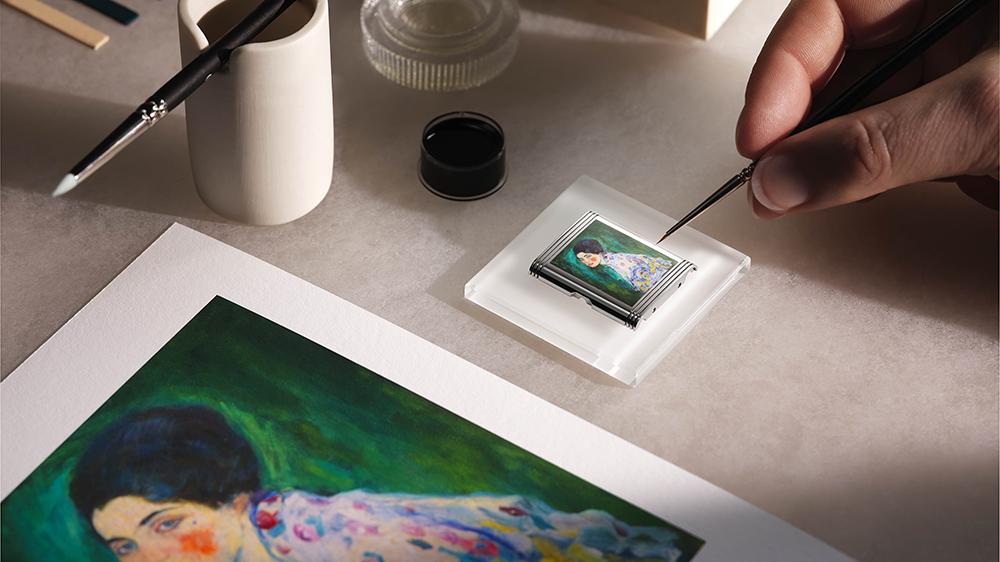 The Hidden Treasures trio will let you put literal works of art on your wrist.

Jaeger-LeCoultre uses the reverse dial side of its swivelling Reverso case as a canvas to reproduce paintings in miniature by three great masters: Gustave Courbet, Vincent Van Gogh and Gustav Klimt. All three of the paintings were at one point lost or stolen—and then found again. The faces of each are guilloched in different patterns and then coloured to match the spirit and harmony of the paintings on the “hidden” reverse side.

The works in the Reverso Tribute Enamel Hidden Treasures trio were chosen not only because of their intriguing provenance but because the artists were active when the Reverso was introduced in 1931. It was a watershed moment in the Western artistic tradition, from the 19th-Century Realism of Gustave Courbet to Vincent Van Gogh’s Post-Impressionism, to the expressive and experimental spirit of Gustave Klimt and the Viennese Secession.

“We wanted the story to be relevant to the collection and to the watchmaking crafts that were coming into use at the time, such as guillochage, but also with a nice angle,” says Catherine Rénier, CEO of Jaeger-LeCoultre. “The complexity of the miniaturisation was a challenge,” she says. “We approached the museums hosting the paintings today to discuss the finer points of the interpretations, and the colours, etc.” Jaeger-LeCoultre established its own in-house enamelling atelier in the 1990s. 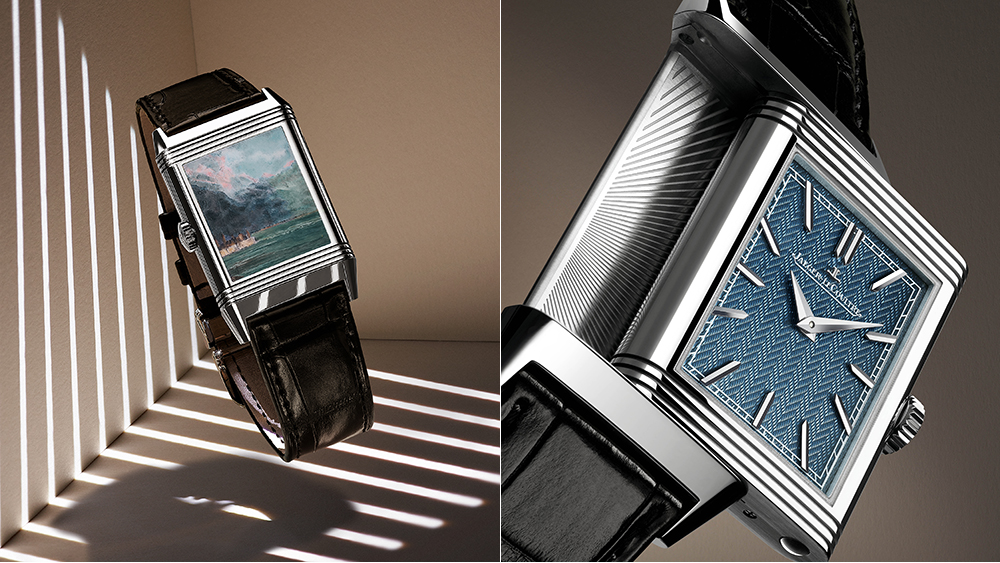 The Courbet piece, View of Lake Léman (1876), captures a view of Lake Geneva near Vevey, Switzerland, where Courbet lived after being exiled from his native France in 1873. He was inspired by the constantly changing views across the water and painted the lake many times. The piece in question was hung in a small museum along with several minor works by minor artists. It was discovered by a curator, who took it to an expert who confirmed it was genuine. Courbet painted with a blade rather than a brush, which gives his works a distinctive style. The dial side of the Reverso Courbet model is decorated with herringbone guilloché texture, and coloured misty grey-blue. 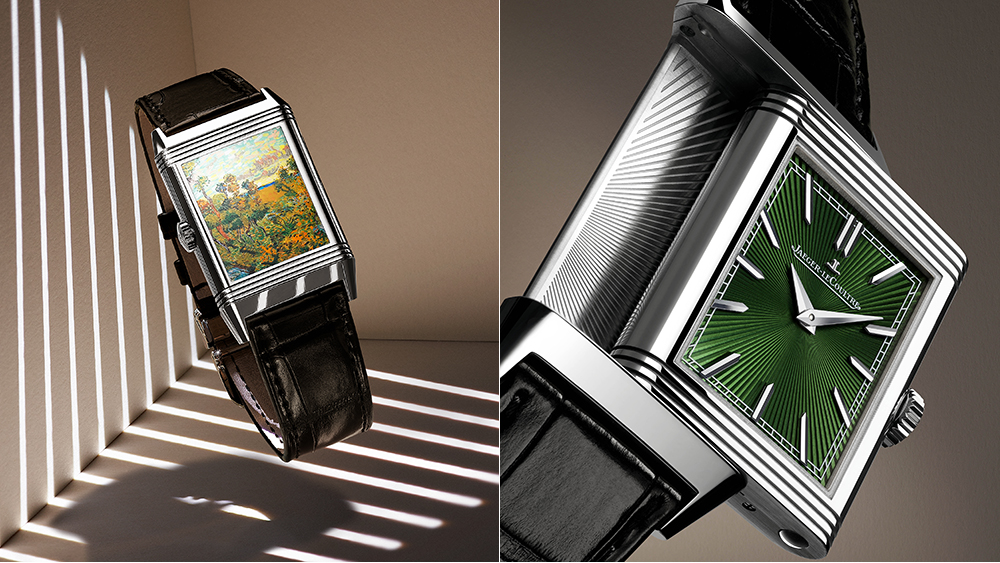 The Van Gogh painting, Sunset at Montmajour (1888), is an example of the artist’s quest to portray nature in new ways, capturing the distinctive vegetation of Provence and the rich colours of the golden hour just before sunset. This painting is said to have been hung by a private owner in his home, and that a visiting guest dismissed it as a fake. The owner banished it to the attic. It was discovered years later by his family, who took it to the Vincent Van Gogh Museum in Amsterdam. Experts analyzed it and determined the pigments were exactly the same as those Van Gogh used and deemed it genuine. Jaeger-LeCoultre’s master painter faithfully reproduced the artist’s strong sense of perspective, signature brush stroke and heavy impasto, a technique that uses thick layers of paint that raise above the canvas. The dial side is decorated in a sunray barleycorn guilloché pattern and coloured a shade of green to complement the rich gold and russet tones of the painting. 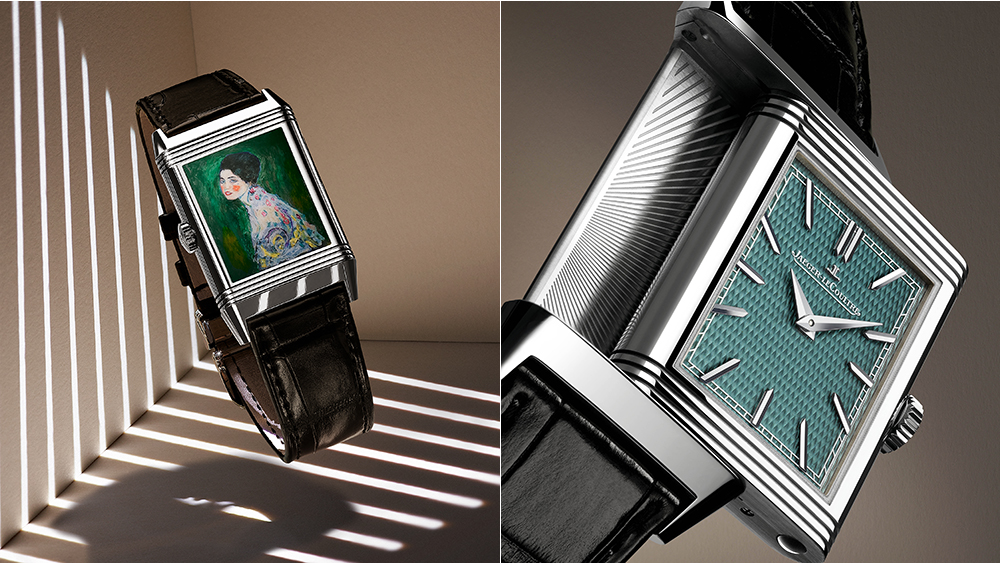 The Klimt painting, Portrait of a Lady (1917), is the only known “double” portrait by the Viennese artist, painted over an earlier work. Klimt had fallen madly in love with a young woman who became his muse, then suddenly died. Attempting to ease the pain of his loss, he painted over her portrait with a new one, of a different lady. She bears the same fashionable outfit and elegant pose that is characteristic of Klimt’s work. In the late 1990s, the work was set to be exhibited at a gallery in Italy but was stolen before the exhibition opened. It was discovered a few days later by a gardener working on the property. It had been stashed in the crevice of a stone wall under some ivy, inside a black, waterproof bag. It was in perfect condition.

Each of the Reverso Tribute Enamel Hidden Treasures is limited to 10 pieces and contains the manual wound calibre 822/2, with a 42-hour power reserve. The cases measure 45.6mm x 27.4mm, with a 9.73mm thickness. They’re mounted on black alligator straps and priced at approx. $142,900.