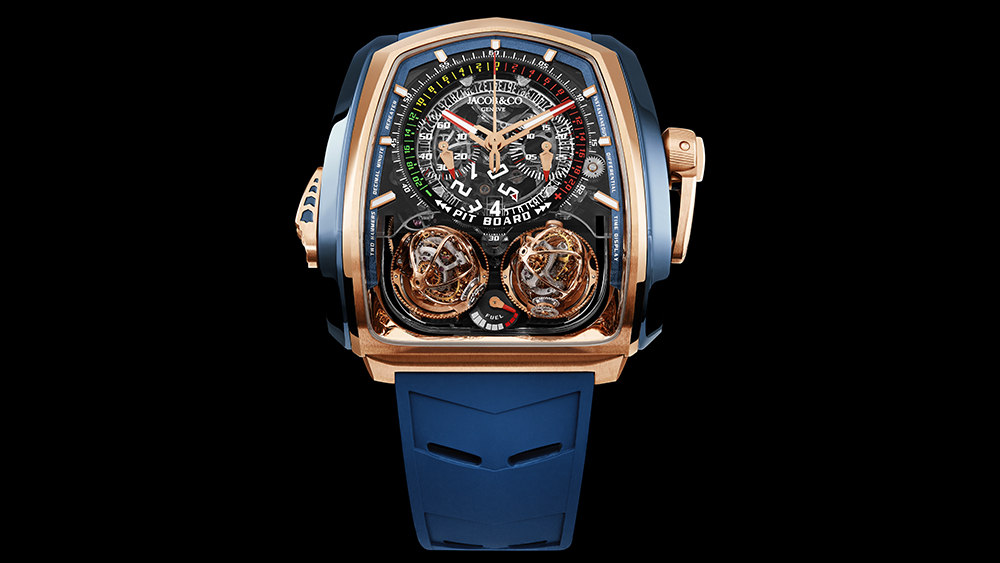 Jacob & Co. is making a statement with its latest release, presented in an unusual blue titanium case.

On Tuesday, the New York-based watchmaker added this new model to its Twin Turbo Furious series. The watch has a monster 57mm by 52mm case crafted from blue-titanium and 18-carat rose-gold, while the dial is framed with a blue rehaut made of Neoralithe—a UV, thermal and shock-resistant resin. The series is an ode to high-performance hypercars, so the nostalgic pit board and fuel gauge settings are front and centre on the dial. And, as with most releases these days, the timepiece’s anti-reflective sapphire-crystal casing allows you to view every detail of its movement from its openwork front and case back.

Like the other three series models, this Twin Turbo Furious uses the JCFM05 manual-winding tourbillon movement, made up of 832 components. The complications include two high-speed triple-axis tourbillons, a decimal minute repeater, a monopusher chronograph, and a reference time differential function. The complex movement allows for a 50-hour power reserve.

The original Twin Turbo Furious was launched back in 2016 at Baselworld and was recognised as the first timepiece in history to combine two triple-axis tourbillons and a minute repeater, according to World Tempus. Jacob & Co. incorporated the pit board into the Twin Turbo models to bring them closer to the design of hypercars and to offer collectors an easy way to compare two elapsed times, and it’s still the stand-out feature today.

Similar to old-fashioned pit boards, you’ll be able to manually set reference times by using its crank—pulled out to the first position and unfolded—to move the coloured, rotating disk and a central digital display to set the reference time. If you start the chronograph using the monopusher, you’ll begin to notice the elapsed differences. This rather vintage method of measuring time gives a nod to classic motorsports, proof that not everything old is outdated.

The watch is available in just 18 examples for approx. $809,000. Visit Jacob & Co. to find an authorised dealer near you.