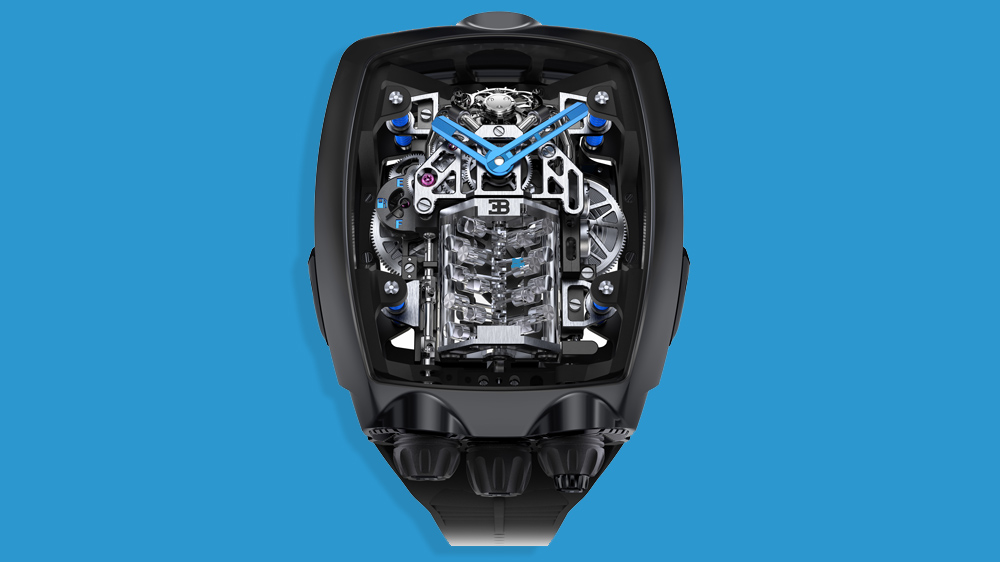 Jacob & Co. is not the first company to design a watch with a sports car theme, but it is the first to reproduce the engine block of a racing car in 3-D animation, with 16 moving pistons and a working crankshaft. The Bugatti Chiron Tourbillon, co-designed by Jacob & Co and Bugatti, houses a functional miniature reproduction of the W16-cylinder engine in the Bugatti Chiron racing car.

At the press of a button, 16 tiny pistons churn up and down inside the cylinders of a complex crankshaft that was milled from a single piece of steel at tolerances so precise, it took three days to program the CNC machines that produce it. Unlike a tourbillon or a minute repeater, the animated component of the watch has no horological purpose. Like most automatons, it exists for visual impact only. The motion of the engine drives two turbochargers on the case side that mimic those on the Chiron car’s engine block (except the Chiron engine has four), but that’s also strictly for show. 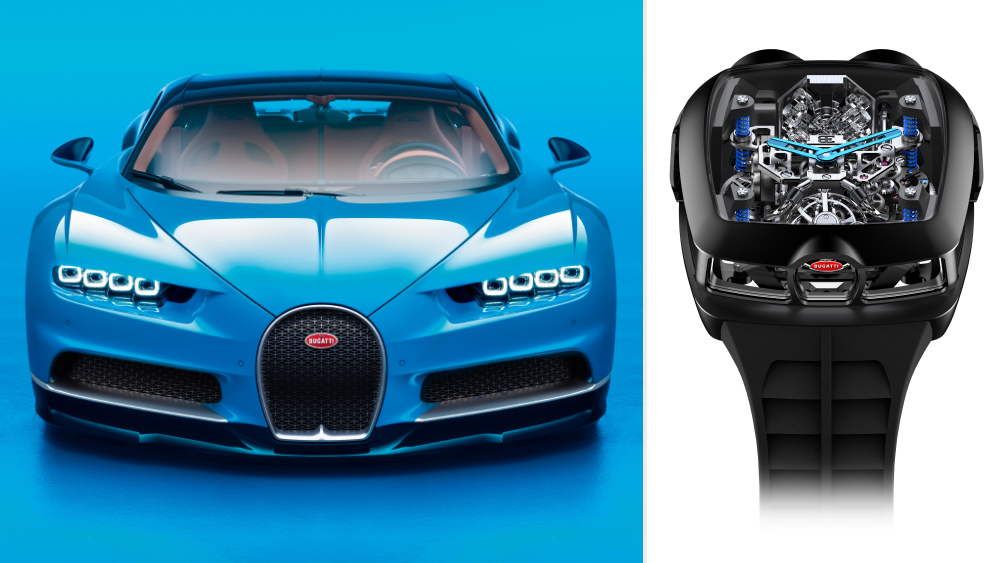 The watch has two mainspring barrels, one to drive the automaton and the other to drive the movement. The engine animation lasts 20 seconds, and it can be activated three times before its mainspring will need to be rewound. The centre of three crowns positioned at the end of the case in the 6 o’clock position winds the movement barrel in the clockwise direction and the engine barrel in the counterclockwise direction. The crown on the right is the pusher that activates the automaton, and the crown on the left sets the time. The movement has a 60-hour power reserve, indicated on the gauge at 3 o’clock by the universal gas tank icon positioned between “Empty” and “Full” markers.

In another auto-inspired flourish, the movement and baseplate are dramatically suspended from the case by four visible struts that resemble automobile shocks. They are coated in blue on this model, but the colour can be customised. Because the crown stem is not rigid, the “chassis” or base plate can thus move slightly without breaking it. Jacob & Co. created (and patented) a special automotive-style transverse system with hinge-like components to prevent the crown post from being be damaged by the movement of the base plate.

The 578-component movement is manually wound, with a one-minute tourbillon inclined on a 30-degree angle. The window to the tourbillon is modelled after the iconic horseshoe grill of Bugatti hypercars. The case, inspired by the flowing lines of the Chiron is big: It measures 44mm wide, 54mm long and 20mm thick. Like several other Jacob & Co watches, the sides are made of sapphire crystal, creating a window into the mechanism.

The rest of the case is black titanium (roughly the colour of a car’s engine block). The watch can be customized with different colours to match your Bugatti car or set with gems. Jacob & Co will produce 250 pieces. You don’t have to be a Bugatti Chiron owner to buy one, but you will need roughly $448,000. Jacob & Co formed a partnership with Bugatti last year, kicking it off with the Twin Turbo Furious Bugatti, a triple-axis tourbillon, and the Epic X Chrono Bugatti 110 Years Anniversary Edition.