The famed haute horologer once again pushes the boundaries with its latest.

Jacob & Co. has made a name for itself with its ‘out-of-this-world’ timepieces, and the Astronomia is arguably the most recognisable.

The latest addition to the heady Astronomia range is the Solar Zodiac Black which arrives in a case derived from DLC treated titanium, something the brand says adds a new approach to ‘celestial watchmaking’.

The use of the new material changes the look of the 44m timepiece – which incorporates the entire solar system within the case – adding a sleek, muted look to the otherwise eye-catching timepiece.

Inside the case, the planets are represented by half-spheres of semi-precious stones. White Granite for Mercury, Rhodonite for Venus, Red Jasper for Mars, Pietersite for Jupiter, Tiger Eye for Saturn, Blue Calcite for Uranus, and Lapis Lazuli for Neptune. 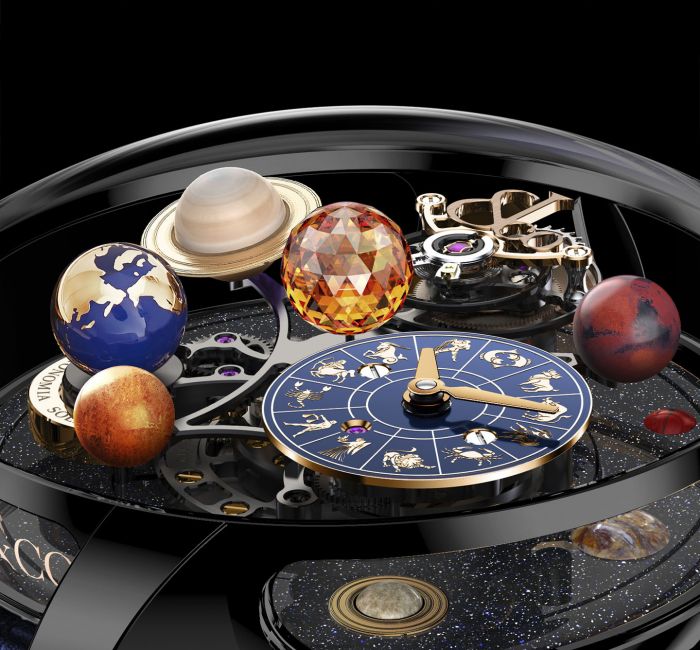 The solar system floats above an aventurine skylayer disc that holds that rotates counter-clockwise, holding the stone planets.

The JCAM19 calibre powers the technical timepiece. Composed of 444 components – all finished to the highest standards of haute horlogerie – the piece completes a rotation around the centre of the watch in 10 minutes.

Elsewhere, the piece tells the time through the zodiac symbol platform which allows for easy legibility.

The timepiece is strapped to the wrist via a large-scale alligator strap and black PVD titanium deployment buckle which matches that of the case.