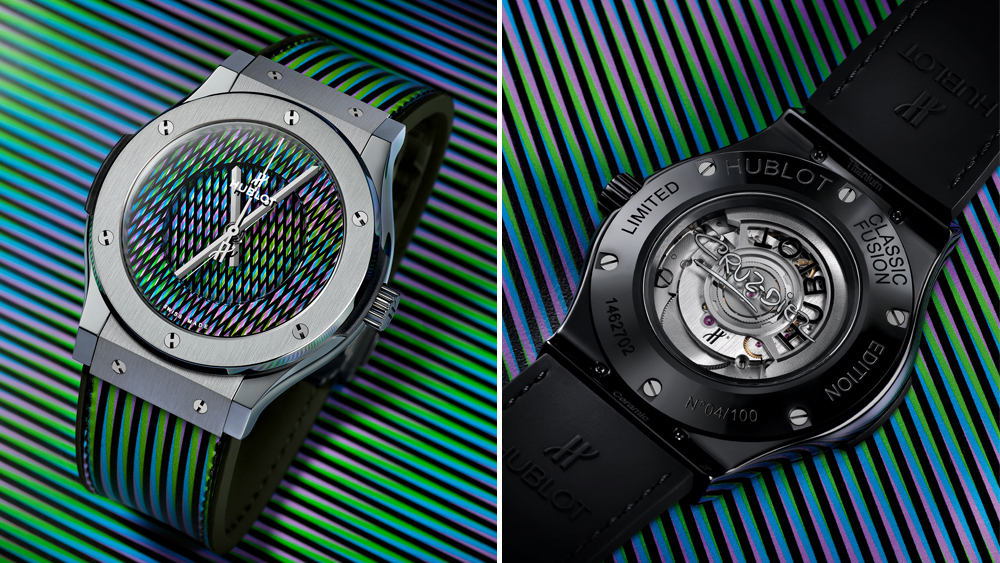 The famed Swiss watchmaker debuted its newest collaboration with the late artist during Art Basel Miami.

Avant-garde art wasn’t the only thing making a splash at this year’s Art Basel Miami. The can’t-miss event has recently begun a second act as a venue for the launch of many projects, several with a stylish bend. In just one example, venerable Swiss watchmaker Hublot debuted a new version of its Classic Fusion timepiece created in collaboration with the late artist Carlos Cruz-Diez.

Cruz-Diez was hugely inspired by kinetic energy and all things in motion, an interest which he cleverly translated to Hublot’s new watch. By closely placing thin lines of contrasting colours, the artist created the illusion of light dancing over its dial, much like the iridescent green of a beetle’s wing, something he referred to as the moiré effect.

But Hublot’s expert engineers were able to take Cruz-Diez’s vision a step further to enhance his visual sleight of hand. This iteration of the Classic Fusion has a dial constructed with two separate levels: the first is home to the hour hand while the minute hand is situated on the second. Together, they drive the rotation of a central disc, shifting it every 24 hours in a subtle but nonetheless mesmerising way.

Anything created from passion will last forever. The last project from the late artist Franco-Venezuelan artist #CarlosCruzDiez further strengthens the links between art and watchmaking. The new #ClassicFusionCruzDiez features an array of colours in constant motion, changing in potentially infinite combinations. @ateliercruzdiez #CruzDiez #HublotLovesArt

“We are very excited to present this project. It is the culmination of developments made since our first collaboration with Carlos Cruz-Diez in 2015, and a tribute to his work,” said Ricardo Guadalupe, CEO of Hublot. “Kinetic art is a disruptive art form that places the spectator’s perception at the centre of the piece in order to question the purpose and status of a work of art.”

This wearable version of that concept comes in both a 45mm and a 38mm case size rendered in either King Gold, titanium or black ceramic. Any option creates a striking contrast with the multicolour face and calfskin leather strap.

Born in Venezuela, Cruz-Diez is considered a critically important member of the Op Art movement, which reached its peak around the middle of the last century. He spent much of his career travelling between his homeland and Europe, never tiring of his experimentation with his favourite thing––colour. “Colour,” he once said, “evolves continuously in time and space.” He eventually settled in Paris in 1960 where he died earlier this year at the age of 95.