Crafted with a minimal silhouette and spare detailing, H. Moser & Cie’s Endeavour Concept Minute Repeater Tourbillon keeps appearances simple so it can astound with its inner workings. The minimalist design excludes standard hour indexes, and instead relies on a minute-repeater complication that marks the passing of every 60-minute interval with sound. Sporting a new electric blue colour, the clean dial instead acts as a showcase for the chimes and hammers visible on the dial side, as well as its tourbillon positioned at 6 o’clock.

Developed in partnership with Timeless SA, the duo positioned the chimes and hammers along the side of the dial between 10 and 11 o’clock, so as not to tamper with the proper functioning of the tourbillon. And all of this technical artistry comes housed within a 43mm case whose proportions are in line with its pared-down look. 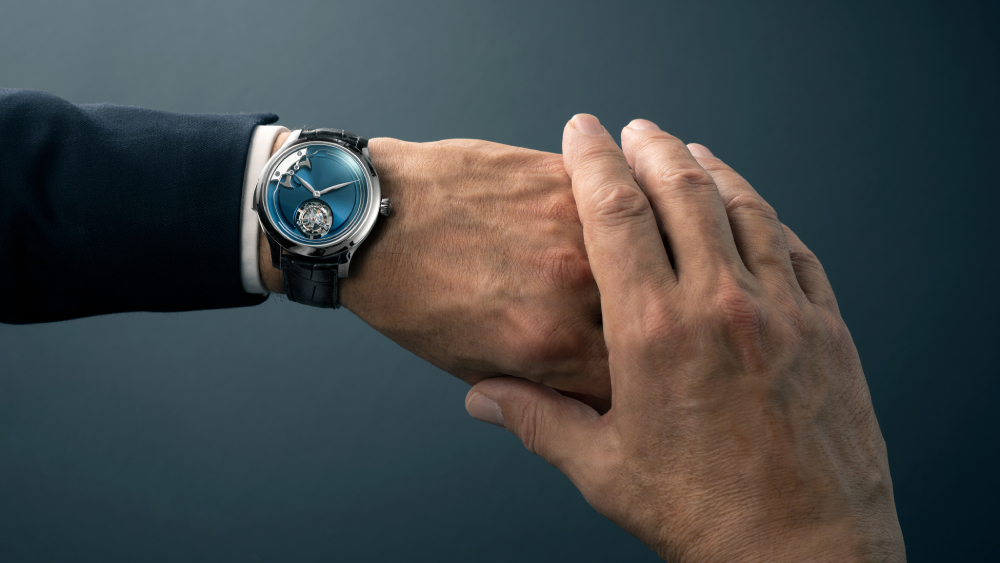 The new timepiece has a minimal face to showcase its flying tourbillon. H. Moser & Cie

Forged from titanium (for better sounds and a lighter wear on the wrist), every facet of the case and the hand-wound HMC 903 calibre movement within was designed to maximize space and free the design of excess embellishment. Even things as small as the sliding bolt built into the mainplate and fitted on a Teflon runner were considered in order to save room for other components. The case, however, had to be widened slightly to make space for the movement itself, as well as the soundbox that amplifies the hourly chimes.

Placed behind a skeletonized bridge, the one-minute flying tourbillon is fixed to delicate ball bearings that improve its accuracy. This makes it appear to float against the backdrop adding to the face’s serene composition, whose lightness is contrasted by a hand-stitched black alligator strap.