Girard-Perregaux has teamed up with Aston Martin’s Aramco Cognizant Formula 1 (AMF1) racing team to create another watch—and this one has serious design chops.

Dubbed the Laureato Absolute Chronograph Aston Martin F1 Edition, the sporty 44mm timepiece features a lightweight case made from carbon and titanium powder, the first of its kind in the watch industry. Its ‘Aston Martin Racing Green’ strap is made from high-performance rubber and upcycled carbon elements taken from retired AMF1 racecars. To top it all off, because the material varies across examples, each piece from this sporty collab is truly one-of-a-kind. 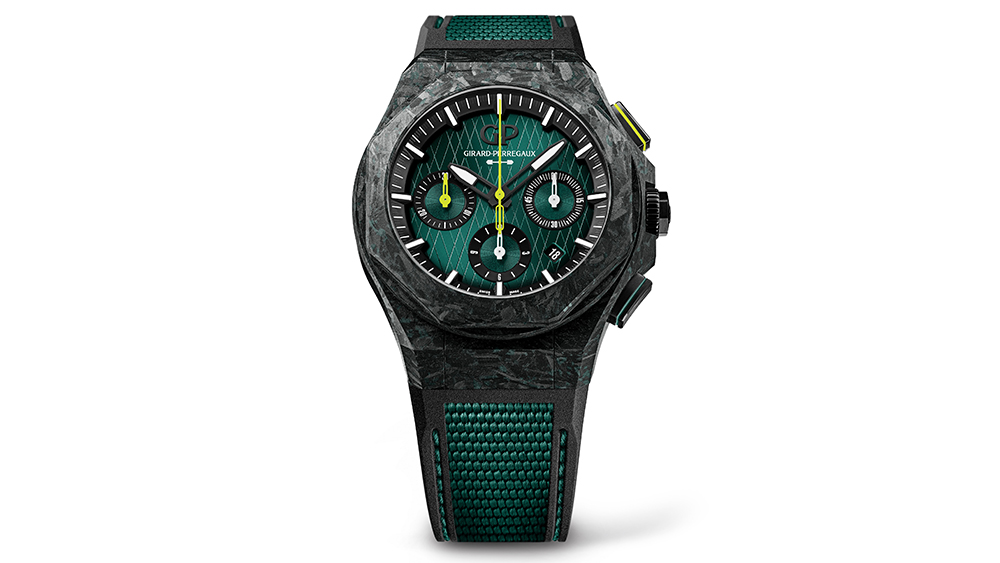 The watch’s design features plenty of references to the carmaker’s luxury offerings. The first is its sunray green dial, which is topped with a cross-hatching motif in homage to the marque’s “AM” badge of 1921. Its open-worked hands are meant to mirror the hollowed-out components often found in sport cars, while the counterweight on the central chronograph hand resembles side strakes used on Aston Martin road cars.

But what ties the piece most closely to the AMF1 racing team is a splash of lime. This vibrant detail emulates the team’s car for the season and appears on the chronograph second hand, the chronograph minute hand and the top right pusher. The model grants you full view of its automatic calibre GP03300-1058 movement, which achieves a power reserve of 46 hours, through its sapphire crystal caseback. The watch is also water resistant to 100 meters. 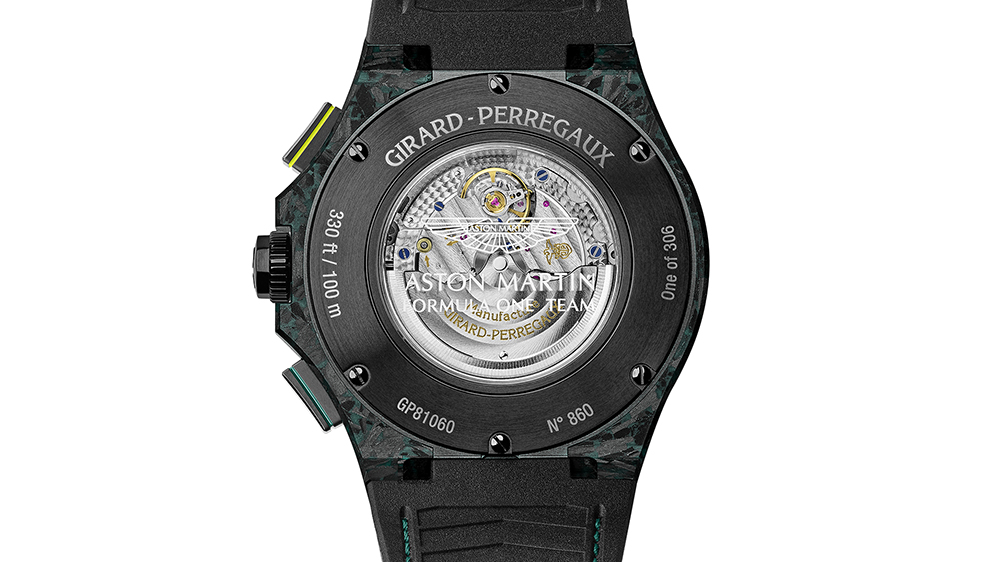 A close-up look at the figure’s sapphire crystal caseback. Girard-Perregaux

This is the third watch the two firms have partnered on following last year’s standout Tourbillon with Three Flying Bridges Aston Martin Edition and the Laureato Chronograph Aston Martin Edition. In another special nod to the team, Swiss watchmaker kept in mind that AMF1 is based in Silverstone, England, close to the iconic F1 racetrack known as the Silverstone Circuit. So, to match the total distance its drivers Lance Stroll and Sebastian Vettel are aiming to cover on race day (5.891km x 52 laps) at the 2022 British Grand Prix in July, the Laureato Absolute Chronograph Aston Martin F1 Edition is limited to just 306 units.

You can buy the limited-edition watch now for $40,000 at Girard-Perregaux retailers worldwide.