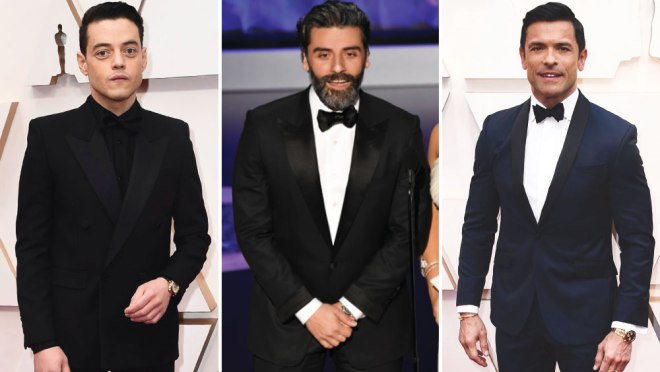 The Best Watches At The 2020 Oscars

Although jewellery gets a tonne of attention on the red carpet, it was hard for us not to notice that a few gentlemen showed off some very fine wrist candy at the Oscars. For the guys who wore their own timepieces, Rolex was, of course, the popular brand. Oscar Isaac wore the most surprising choice of the evening, wearing Omega’s 50th-anniversary tribute watch to the moon landing. Mark Ruffalo and Rami Malek sported dress watches from Harry Winston and Cartier, while Antonio Banderas opted for the ultra-sleek and ultra-thin Bulgari Octo Finissimo. Gold seemed to be the material of choice—this is Hollywood, after all—and we’re hoping that might be a burgeoning trend now that the craze for steel watches seems like a bubble near bursting.

Lee’s custom Gucci suit, a tribute to the late Kobe Bryant, might have gotten all of the attention at the Oscars, but if you were paying attention, another gem was his highly covetable Rolex GMT-Master II “Root Beer” in Everose gold (approx $57,000). It was a nice reminder to the watch obsessives that there is life in the land of Rolex beyond the “Pepsi” version of the GMT-Master II. The Root Beer is still almost as hard to get as the Pepsi, especially in Everose.

It’s old hat to see plenty of Rolex, Jaeger-LeCoultre or Piaget watches on the red carpet. But an Omega Speedmaster that pays tribute to the 50th anniversary of the moon landing is a most unusual choice. Rolex, while still a sports watch brand, has somehow surpassed being pigeon-holed in the category. Because it’s the crown, it’s appropriate for all occasions. But popular Omega models are still strictly considered casual. Nevertheless, this was a sharp and interesting choice that suggests Isaac may know a thing or two about watches beyond the basics.

The 6,969 models that were created for the anniversary last year have sold out—if you want one, you will have to pay nearly double the original price on the secondary market.

Antonio Banderas in a Bulgari Octo Finissimo in Titanium

Known for its groundbreaking design and serious mechanics, the Bulgari Octo Finissimo doesn’t yet have the visibility of a Rolex, but it’s a watch that has real respect from serious watch collectors, many of whom consider it a must-have for their vaults. It also happens to be ultra-thin and light as a feather—perfect for slipping under a tux in anticipation of bringing home a gold medal. (Better luck next year, Antonio, but hopefully the timepiece makes a good consolation prize?)

As a brand ambassador for Cartier, it’s no surprise Rami Malek showed up in one of the brand’s timepieces. What is unusual is that he opted for a Pasha de Cartier model from 1993. It’s not quite vintage yet (usually only watches from the ’70s and earlier fall into that category), but it does have an appealing retro vibe and showed up nicely against his all-black Saint Laurent ensemble. It was a nice departure from the Tank, a perennial red-carpet favourite.

Harry Winston was one of the few watch brands to get real stage time last night. Presenter Mark Ruffalo wore a white gold, 42mm Midnight Retrograde timepiece along with Harry Winston Zalium cuff links in white gold. It was the most classic black-tie watch of the evening. Thankfully, he also opted for a classic tux to match.