Interest in horology is, beyond exemplary engineering and elevated design, about plotting a path through history and navigating what has gone before to fully appreciate what presents today.

Beyond this, there’s something tangibly magnetic about the originals.

It’s why we’ve spent the week buzzing in the knowledge that some of the world’s most gilded timepieces have commenced a tour of Australia and New Zealand.

Where many assert ownership, Blancpain can state fact in its Fifty Fathoms being the world’s first dive watch.

It was in 1953 that the legend was born – though its roots date three years prior to when Jean-Jacques Fiechter took the helm of the world’s oldest watch brand.

An avid diver, a passion shared by current Blancpain CEO Marc A. Hayek, Fiechter wanted to create a watch that could travel with into the depths below.

The resulting Fifty Fathoms was an immediate standout for its functionality and simple, appealing design – notice taken by Captain Robert ‘Bob’ Maloubier, founder of the French Navy’s Frogman group and who approached Fiechter to outfit his men with Blancpain’s Fifty Fathoms as part of their official combat gear. 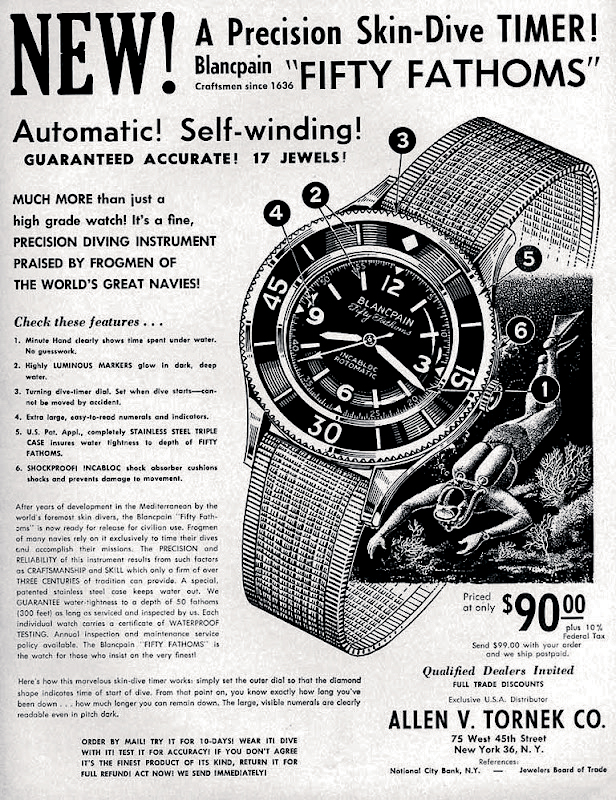 In 1956, further acknowledgement of the piece and its robust abilities and reliable allure came via the famed French diver and environmentalist Jacques Cousteau, who wore the piece in his Oscar and Palme D’Or winning documentary, ‘The Silent World’.

Ultimately the Fifty Fathoms proved a tapestry on which Blancpain pushed wider and innovated further – a stunning centrepiece for all that the manufacture continues to deliver as well as influencing and defining all subsequent dive pieces across all brands.

On display for the first time in Australia are three impressive and rare vintage Fifty Fathoms references – each exquisite in condition.

This is a unique and exceptional opportunity to personally engage and absorb some of the world’s finest and most important vintage pieces; a chance to embrace groundbreaking horological history firsthand.

blancpain.com
The vintage Fifty Fathoms references are on display at Watches Of Switzerland’s (WOS) Sydney boutique until April 25. They then move to WOS Perth (April 29 – May 9), Partridge Jewellers Queen St, Auckland (May 18 – 29) and Monards Collins St, Melbourne (June 8 – 20).
ADVERTISE WITH US