Each piece has been hand-decorated in antique gold spangles.

The latest introduction to Audemars Piguet’s Code 11.59 collection, the Grande Sonnerie Carillon Supersonnerie, is proof that the Swiss watchmaker remains steadfastly committed to the line despite receiving a frosty reception from the watch community at its debut. But the collection’s high-horology pieces are out to quiet the naysayers. Grande sonneries are the pinnacle of high-watchmaking—the most supreme level of horology—and Audemars Piguet went one step further to ensure that this timepiece represents the very best of Switzerland’s craftsmanship by topping it off with a dial created by Anita Porchet, one of the most legendary dial artisans in the country.

Her work has been commissioned by elite houses from Patek Philippe and Vacheron Constantin to Piaget. Porchet is first and foremost an artist, but she found herself working in enamelling thanks to her godfather who inspired her immersion in the craft. “He was someone who inspired me very much,” Prochet told Robb Report in an exclusive interview. “He taught me how to search for and create art and that is what I loved. He taught himself enamelling and made creations in miniature, but just to a certain level, but he gave me the foundation of this work. He gave me the taste for this kind of art and I used to practice with him and today, I continue in my training.” He was also a violinist and a painter, two other art forms, for which both he and Porchet shared a passion. “What marked me the most was his love for architecture,” says Porchet. “But he was after the research of beauty in many different domains.” 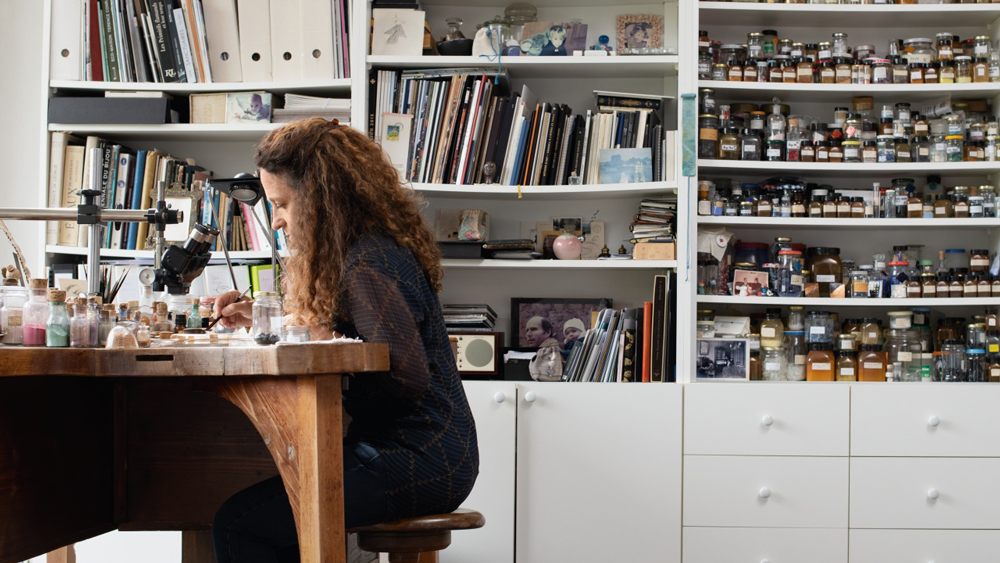 Anita Porchet in her studio Courtesy of Audemars Piguet

To date, Porchet continues to strive to learn new techniques in the art, as well as the architecture, of the dial. The striking greenish-blue hue of the hand-crafted grand feu enamel on the new Grand Sonnerie by Porchet comes in three versions. Each is decorated with different designs incorporating antique gold spangles that date back over a century. “I found the spangles from the old stocks of enamel ateliers,” Porchet told Robb Report. “There are many from centuries past that have closed little by little over time.” The remnants of their diminishing craft, however, still remain and Porchet says she swiped up all that she could in hopes of using them for future projects. 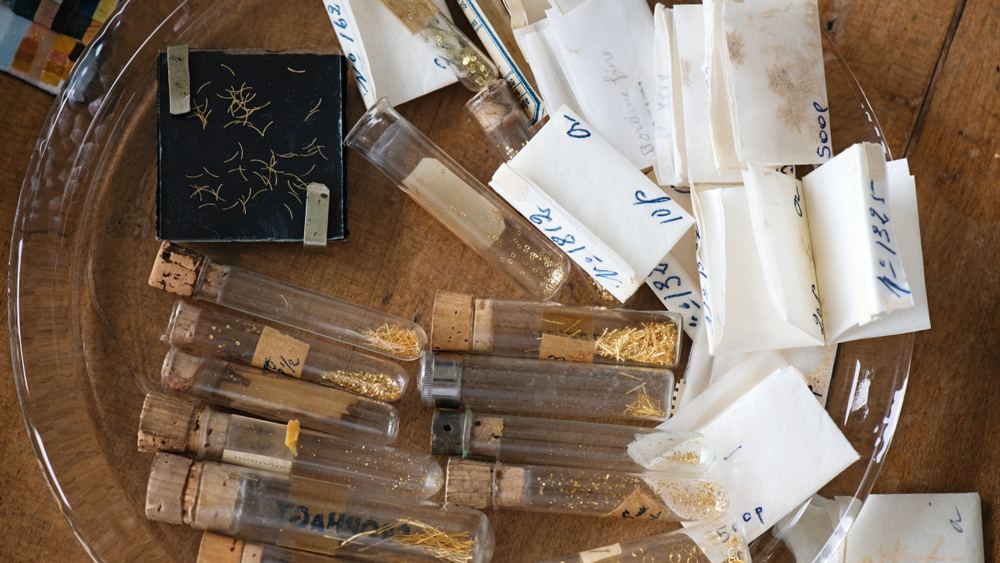 The art of spangling dials dates back to 18th century, according to Porchet, but became more visible at the beginning of the 19th century. However, it is an art form that has been lost to time. Porchet says she had no special training or knowledge of the craft until a client came to her in 1995 with an old pocket watch from the 1870s that he was hoping to get restored. The watch had thin spangles in the form of guilloché. “For me, it was a challenge to rediscover this technique and try to redo it,” says Porchet. “I had the opportunity to have this watch in my studio and to learn, little by little, how these watches were made during that era.” It was a learning process that would take her two years.

Porchet has now revived the technique for Audemars Piguet in three ultra-exclusive iterations on the new Grand Sonnerie. Another two pieces will come with the opportunity for a client to customize a design with Porchet. The spangles, which were meticulously cut and curved in thin gold leaves by hand on ancient tools, are hand-applied on each enamel dial. They are then transferred to an oven, where they are fired up to 800 degrees Celcius to fuse the gold leaves to the dial, which is then covered with a then layer of transparent enamel for a mirror polish finishing.

Applying each gold spangle by hand is an arduous process, rendered even more difficult by the fact that these tiny and priceless decorative objects are over a century old, but Porchet demures when asked how long each dial takes. “For me, the time it takes is not important,” she says. “Of course, I studied it very hard, but what matters to me is the process and the sense of artistry I give to each piece. I can’t express the time it takes, because I create each piece in the moment. I don’t have a schedule that I follow. What was important is to create pieces that cannot be reproduced and to have created something truly unique.”

The dials alone make these watches extraordinary collector’s items, but what’s underneath the hood is an equally remarkable achievement. The Grande Sonnerie Carillon Supersonnerie houses a new calibre 2956 movement that combines a traditional grande sonnerie—a complication that strikes the hour, quarter-hour and minutes on request, as well as the hours and every quarter-hour by default—with Audemars Piguet’s supersonnerie technology that expresses the acoustics of a pocket watch in a wristwatch. The latter was the result of 8 years of research, done in collaboration with the Swiss Federal Institute of Technology Lausanne, and required a team of watchmakers, technicians, academics and musicians to achieve.

The watch is also endowed with a carillon, meaning, unlike traditional chiming watches it has three gongs and hammers instead of two in order to strike the quarter-hour in three successive notes. Should the wearer choose, the watch can be placed in a petite sonnerie position to chime the hours only, while the minute repeater mechanism can be activated by the wearer at any time.

It’s a behemoth of a timepiece that Audemars Piguet managed to fit into a very wearable 41mm case, and at approximately $1,080,000 it will require giant-sized pockets and likely a bit of jockeying one’s connections to get one. But it is simultaneously a piece of both visual and audible magnitude, that recreates a bit of horological history on its surface—a piece that will, no doubt, be a prize in a collection of just five collectors worldwide. And it’s just one more notch in the belt for Audemars Piguet, which in 1892 created the very first minute repeater ever produced with Louis Brandt & Frère. This is a rare case in which history repeating itself is a gift, complete with some very significant improvements along the way.