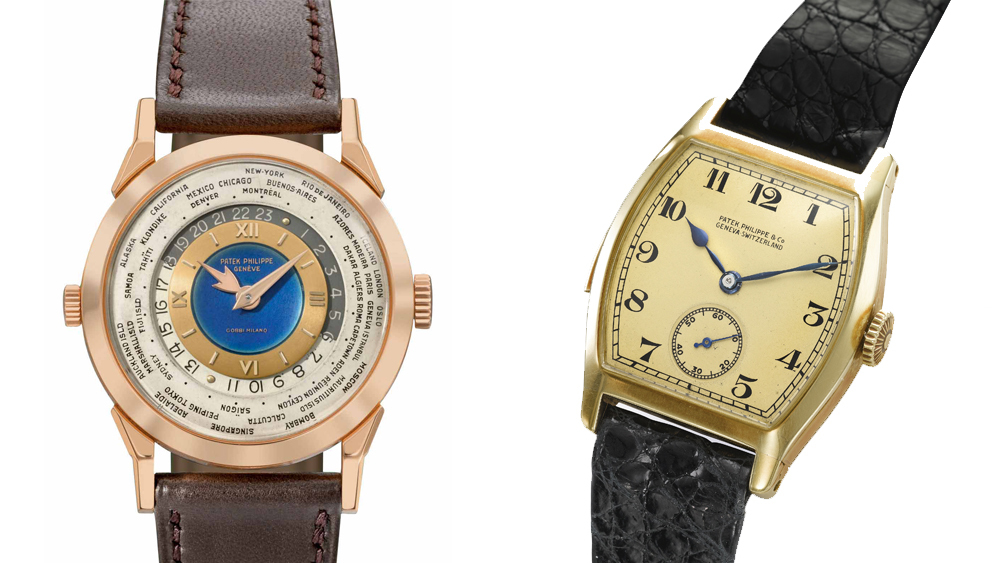 The 180-year-old, family-owned company is one of, if not the, most esteemed watchmakers and rarely turns out a dud, but Christie’s is claiming these timepieces are the crème de la crème and represent “a phenomenal landmark of watchmaking by Patek Philippe.”

First on the block, a tonneau-shaped yellow gold minute repeating wristwatch which belonged to American industrialist Henry Graves Jr. (1868-1953), perhaps one of the most legendary watch collectors of all time. Among other things, he’s known for commissioning the Henry Graves Supercomplication, a pocket watch that was the most complicated timepiece in the world for over half a century, with a stunning 24 complications. He ordered that watch from Patek Philippe in 1925, and it wasn’t finished until 1928. Graves ordered the minute repeater wristwatch in question during a trip to approve the final design of the Supercomplication.

“Specially commissioned and delivered in 1928, it is unanimously considered to be the prime piece among the very earliest recorded Patek Philippe minute repeater wristwatches,” Christie’s said in a statement.

The timepiece will be part of the November 11 sale at Christie’s in Geneva and is estimated to collect between US$3 million to $5 million. Considering it sold for US$2.9 million back in 2012, we imagine it will have no trouble achieving—or exceeding—this estimate.

Not to be outdone, Christie’s Hong Kong will auction an exceptionally rare Gobbi retailed Patek Philippe Reference 2523 on November 27. The 18K pink gold wristwatch—with blue enamel dial, one of the scarcest dial types of all the known versions—was made in 1953 and subsequently sold four years later by the renowned retailer Gobbi in Milan. Legend has it only seven were ever made, and this particular watch is the only one inscribed with both Patek Philippe and Gobbi’s signatures.

“An exemplar of Patek Philippe’s 1950s ‘golden age,’ when design, craftsmanship and technological advancement coincided to perfection, it is unlikely that another reference 2523 of such immense rarity will be available for perhaps decades to come,” Christie’s said. Of course, that rarity is reflected in the price tag: The watch is expected to fetch between US$7 million and US$14 million at auction.