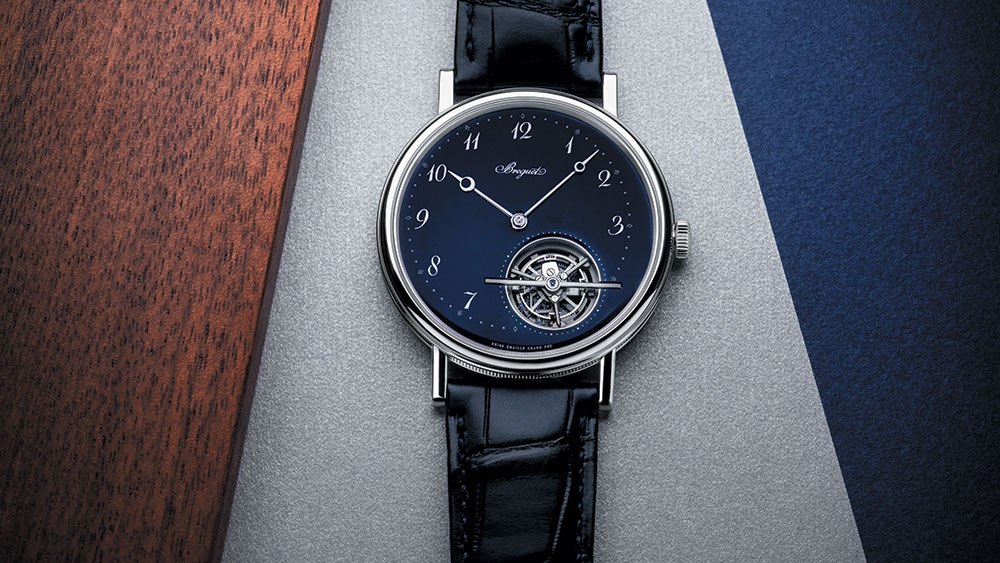 A Breguet Kind Of Blue

The classic, extra-thin tourbillon 5367 gets a richly coloured upgrade.

Connoisseurs fascinated by tourbillons need a Breguet in their collection. Founder Abraham-Louis Breguet invented the famous high-horology complication—patented in 1801—to offset the effects of gravity on the balance and balance spring, so a pocket watch would maintain accuracy no matter its orientation. It was a revolutionary invention at the turn of the 19th century, but today is unnecessary for regulating a timepiece. And yet, thanks to its mechanical complexity and mesmerising appearance, the tourbillon remains a coveted status symbol.

Breguet’s thinnest-ever self-winding tourbillon, at a mere 3mm, has been housed since 2013 in the Classique Tourbillon Extra-Plat 5367, which boasts 80 hours of power reserve. Two years ago, that watch was introduced with a white Grand Feu enamel dial. Now the maison has unveiled its most stunning version yet, with a rich blue enamel shown to great effect within a platinum case.

While tourbillons remain a brand calling card, along with guilloche dials (which have a decorative engraving and are another Breguet invention), the company’s enamel work rarely gets its fair share of the spotlight. Breguet has an entire atelier devoted to the craft, which is slow and tedious even by watchmaking standards.

It involves an exacting process of applying multiple thin layers of enamel to a gold dial, with several trips into a kiln at 949 degrees Celsius, and hand-polishing the result to a smooth sheen. It’s a tricky and expensive endeavour—the dials are in constant danger of cracking in the kiln, and the smallest speck of dust at any stage can ruin the final product—but it’s a face-lift that’s considered well worth the price tag. For watch enthusiasts, the art form adds an extra dose of prestige to a dress watch, further elevated in the new 5367 thanks to the tourbillon nestled between four and six o’clock.

Other elegantly subtle design tweaks include a slightly askew hour track with applied numerals, a hand-bevelled tourbillon bridge, a fluted case band and straight, rather than curved, lugs. Aim a loupe above the tourbillon carriage and you’ll discover Breguet’s secret signature, a tradition dating to the 18th century, when it guaranteed authenticity. Flip the watch over and there’s an eyeful of intricate engraving. Business in the front, party in the back, and a hat trick of Breguet specialties: enamel, guilloche and tourbillon.

But no matter how ornate the flourish, Breguet remains true to its brand of austere classicism, the aesthetic it has maintained well into the era of sports watches and blinged-out ostentation. The brand may have reinvented the wheel more than once in its 245-year history, but its sophisticated style has always remained perfectly in time.