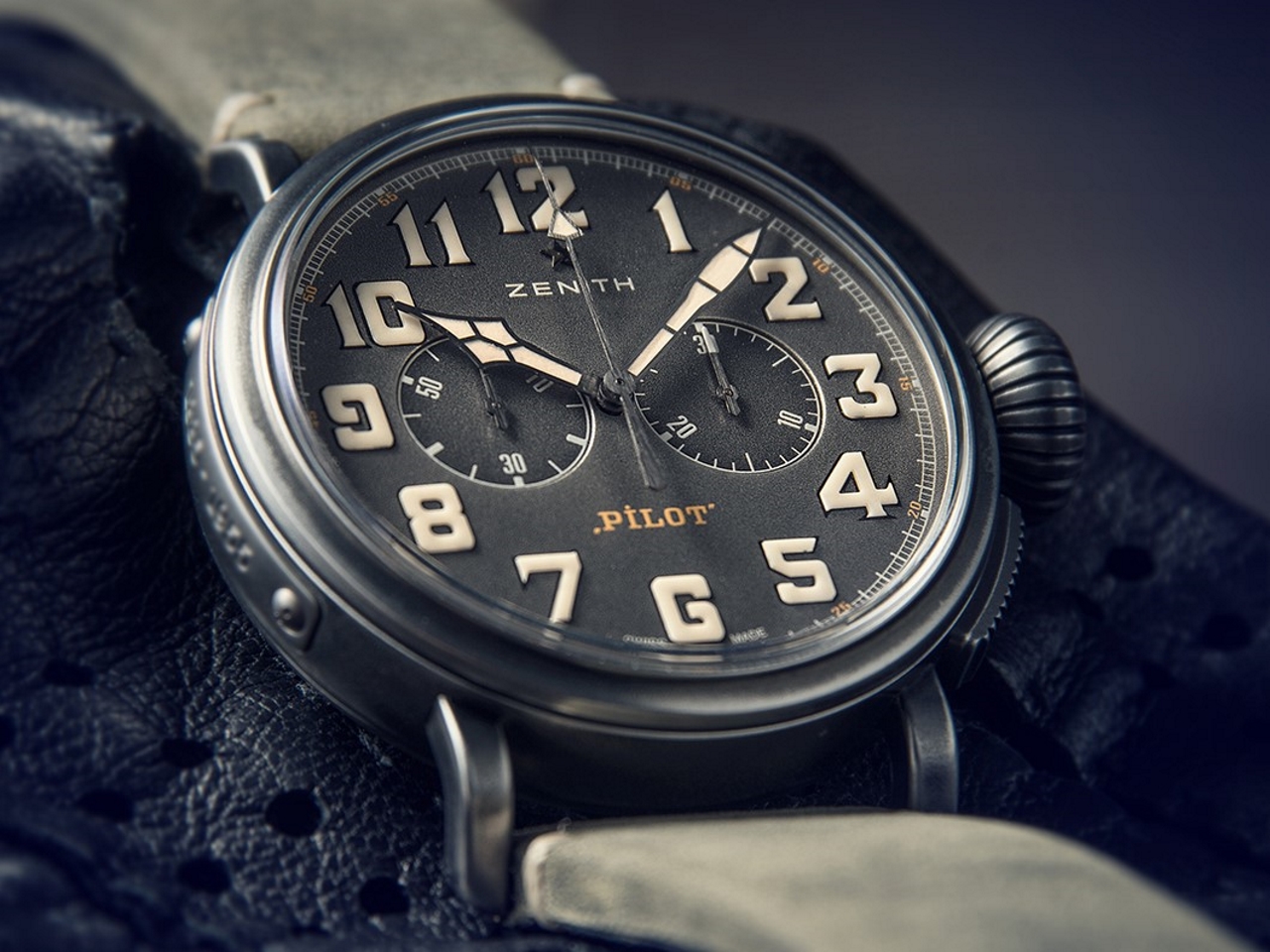 Zenith puts a daring spin on its latest pilot watch

It wasn’t aerospace, but vintage motorcycle culture, that informed the brand’s latest offering.

“I had in mind this tattooed guy, mid 40s or 50, grey hair with leather pants, riding his bike, just cruising down the street,” muses watch designer Marcus Ellinger about his rather unusual inspiration for Zenith’s latest Pilot watch. “These people like simplicity and this is what our watches have.”

While Ellinger runs his own design studio outside Zurich, he has in recent years become a key player on Zenith’s product development team. In particular, the company’s Pilot watches, the product family the brand introduced in 2012, bear his design stamp. But while the first models retain the black dial and white numerals typical of historical pilot’s timepieces, new models have seen Ellinger (below) experiment with materials and colors outside this orthodoxy. “In fact, we never wanted to be limited to strictly aerospace,” he explains. “Pilot for us is also the pilot of a motorcycle or a car. These are pilots as well, and we had this in mind already when we started. These watches have always been playful.”

The brand’s original Montre d’Aeronef Type 20 was already a head-turning watch at 57.5 mm and became an immediate success with collectors. The brand followed it up with non-aerospace modifications such as a sapphire model as well as smaller versions that mixed a rose-gold bezel and lugs with a titanium middle case section.

“It looked like a pilot’s watch, but crossed over into fashion or jewelry,” claims Ellinger. “It got far away from the purely serious, sometimes boring side of being a pilot’s watch.” The brand’s latest Pilot model, called the Ton-Up, takes the progression much further by drawing from a completely different design universe. Ellinger, who is a motorcycle enthusiast, wanted to tap into the aesthetics of European vintage motorcycle culture. He summoned up the so-called café racers (the original name of the model before it was altered to Ton-Up, a slang term for a bike capable of speeds in excess of 100mph or 160 km/h), which bear a functional, stripped-down appearance.

To match these, Ellinger tried to create the look of steel that has been worn and aged. “If you remember in the ’80s there were the stonewashed jeans,” says Ellinger. “This was exactly the effect I wanted to achieve. It looks like it’s been used, but it still looks very fresh and jewellery-like with a high value. This was really tricky because as soon as you start to tear off some of the coating, you can get a cheap look very quickly.” Zenith experimented with a number of different coatings and treatments to both the case and dial before settling on a final procedure.

In many ways the Ton-Up is one of Zenith’s most daring watch designs to date. Both the design inspiration and the execution are significant departures from the conventional luxury environment in which the Swiss brands feel comfortable.

In moving away from aerospace, Zenith is opening its newest family to a potentially limitless array of inspiration and audiences. “The Pilot watch is the playground,” says Ellinger. “This is where we can explore materials, image, and colours, and there are interesting things to follow next.” (zenith-watches.com)