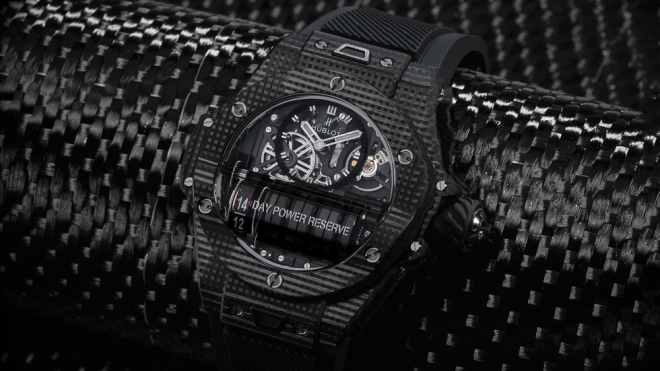 Watchmakers like Richard Mille, Hublot, and Roger Dubuis are taking design cues from McLaren and Lamborghini.

Looking like a mechanical monster, the multipart “tool” in McLaren’s woking manufacturing facility southwest of London is one of the most impressive examples of composite part manufacturing in the auto industry. By applying pressure and heat to a combination of intricately arranged carbon fibre fabric and specially formulated epoxy resin, McLaren’s tool moulds the structural heart of its cars. The MonoCell, sometimes flippantly referred to as “the tub,” takes the place of a traditional chassis in McLarens and other supercars that employ contemporary composite technology. The tub serves as the mounting for both drivetrain and suspension. Its weight and stiffness are your friends as the car comes around the corner, and the way it has been engineered may very well determine your fate if you crash the thing. 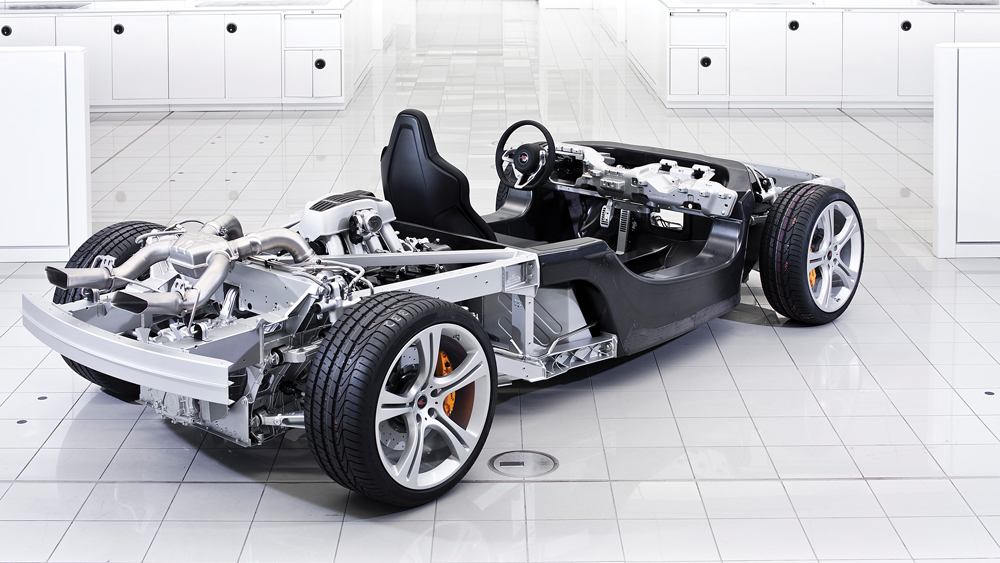 Performance is a little less urgent a matter when you strap one of the latest high-end carbon watches to your wrist. Just a few years ago, watchmakers were content to adorn their dials, or perhaps a part of the case, with carbon fibre’s characteristic weave—a paean to the automotive racing spirit, which most of them discreetly felt would be better addressed by a nice chronograph movement instead. Watchmakers are seldom pried out of their ways of doing things when lip service to a new trend will do.

Lately, however, things have begun to change in certain quarters of the Swiss watch industry. Carbon as a material has begun to attract a new look, and not just for its shimmering black aesthetic qualities. Inspired by the engineering going on in the automotive industry, the watch companies are now beginning to emulate these advanced manufacturing techniques in the construction of both cases and movements, and these new forms of, yes, plastic watchmaking are shaking up some of the old conventions. 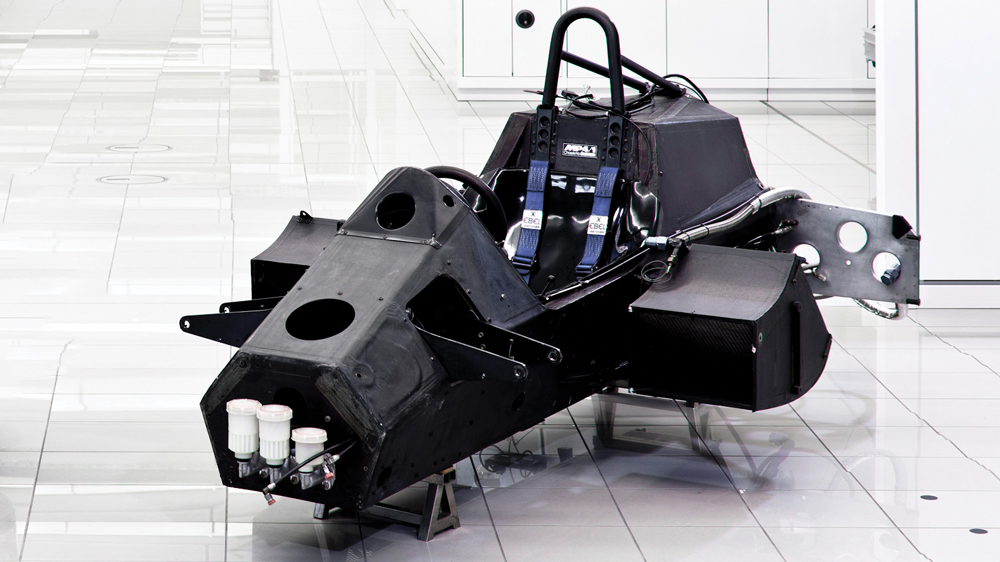 Carbon fibre is a funny material. By itself it exhibits little of the strength or stiffness for which it is known. But bonded together in a cured epoxy resin, its properties are evident. Splinters are like metal shards, hard to break and very stiff. It’s no wonder engineers started playing with the material in the 1960s, discovering its favougrable comparisons to steel in strength, stiffness, and especially weight. By the 1980s, Formula 1 racing had got hold of carbon fibre, building both car bodies and structural elements. The beauty of carbon fibre, as these technicians discovered, is that it can be easily engineered: Since the strength and stiffness of the material reside down the length of the fibres, they can be oriented and built up to almost any stiffness and strength pattern.

“The laminators on our Formula 1 team can create incredibly intricate parts which are laid up by hand, cured, and bonded together in a way that is possible to yield only from time and effort,” says Adam Thomson, assistant chief engineer at McLaren. “They use scalpels and little things like dental tools for pushing plies in the corners; making sure of that ply orientation is absolutely critical.”

Richard Mille is obviously the company that has made untold millions aligning itself with Formula 1 technology, so it comes as little surprise that it would be among the first to push the status quo. This year, it announced a similar partnership with North Thin Ply Technology, which has long provided high-density carbon to the brand (and previously others) that is precisely laid up by machine. That, however, is only the beginning of the company’s capabilities. 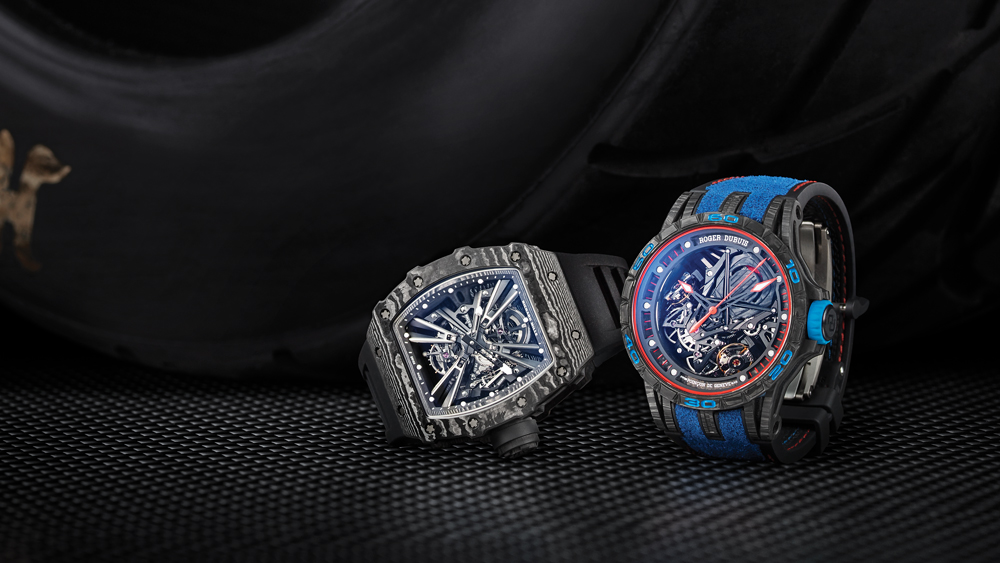 “If we make a bezel that is more than two milli- metres thick, then it doesn’t matter if we pay atten- tion to each layer of carbon,” says Aurèle Vuillemin, Richard Mille’s R&D manager. “When it gets interesting, when we get to movement parts less than two millimetres thick, then the ply fibre direction and the ply setup has an impact, so there we pay attention.” Fibres, for instance, follow the curves of the upper bridges in the RM 50-03 McLaren tourbillon, which was designed in con- junction with the brand’s automotive partner.

Roger Dubuis is also well advanced in producing both carbon cases and movements, yet sees these materials and structures in a totally different light. Like many top Geneva companies, it has long showcased the fact that its movements bear the Geneva Seal, a hallmark which even today is primarily based on traditional movement finishing. These practices are more or less useless on carbon due to the mix of fibres and resin, which do not polish under normal circumstances. Several Roger Dubuis carbon watches have been granted the Seal through a special derogation, but product strategy director Gregory Bruttin is still searching for other long-term answers. “We used carbon for the tourbillon cage (of the Excalibur Spider Carbon), and the power reserve
grew by 30 per cent,” he says. “The material was very interesting from that standpoint,
but it was a process of two years to obtain this certification for carbon from the Geneva Seal. The challenge is now to polish the angles for them.”

Bruttin leans on the brand’s new automotive partner, Lamborghini, to formulate the resin/ carbon mixture now in use at Roger Dubuis. He is also intrigued by the way the car companies
mix metal and carbon fibre—one of the material’s weaknesses is its tendency to fracture at stress points like screw holes. Some of the automotive companies like McLaren actually embed metal components into the carbon during lamination, a development that may provide future guidance for carbon pioneers in Switzerland. “It’s really interesting to mix composite carbon and some metallic parts,” affirms Bruttin. “It’s the same for the car. It’s interesting to everyone.”