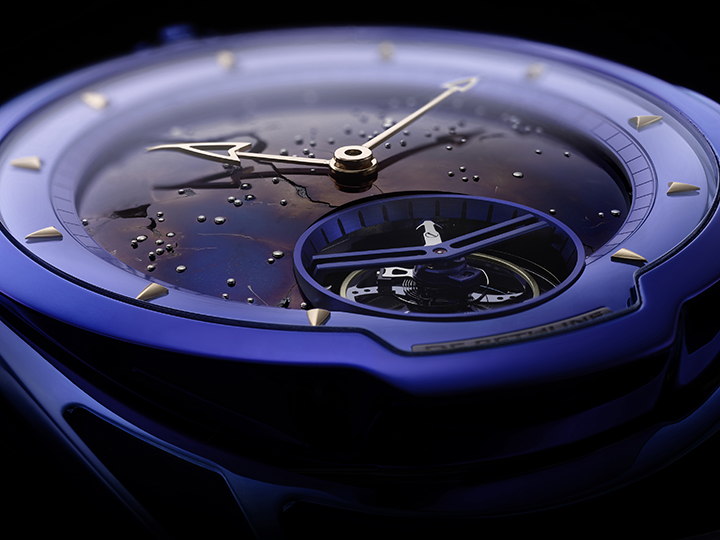 Watches that make you want to turn blue in the face

Bring some calming colour to your daily duties with these brilliantly blue watches.

Watchmaking is in the midst of a blue period, with some of our favourite timepieces on the market now boasting blue dials – and in one instance, a beautiful blue case as well. Aimed at those with a taste for the life aquatic, British watchmaker Bremont’s Supermarine Type 300 is a classic diver’s watch in the Submariner mould. Water resistant to 300m, the Type 300 comes in a 40mm case – a good deal smaller than Bremont’s earlier 45mm S2000 diver, and thus far better suited to everyday wear. A choice of straps (steel bracelet, rubber, leather or NATO) makes it even more adaptable. That’s a quality shared by Vacheron Constantin’s iconic Overseas, which comes with a selection of steel, alligator or rubber wrist-affixings that can be easily interchanged by the owner, depending upon mood or daily purpose. Straddling the divide between sports and formality is the new Audemars Piguet Extra-Thin Royal Oak ‘Jumbo’ ref. 15202 in yellow gold with blue dial. An homage to the first yellow-gold Royal Oak, issued exactly 25 years ago, this anniversary edition is true-blue to its ’70s roots, bringing a dose of unashamedly glitzy disco glamour to the wrist. It’s the old-school style of a vintage piece, with the reliability of a box-fresh purchase. Turning the blue volume up to 11, De Bethune’s Kind of Blue Meteorite Tourbillon features not only a blue dial – hewn from an extraterrestrial alloy of iron and nickel cut from a meteorite that crashed in Argentina, and treated with flame and diamond dust before being sprinkled with liquid white gold – but also a 42.6mm blued titanium case. This being De Bethune, the movement (calibre DB2019v3) is out of this world as well: a 276-part masterpiece, manual-wound with five days’ power reserve, boasting a silicon escape wheel and high-speed 30-second tourbillon in titanium and silicon, running at 36,000 vibrations an hour.

Those are some interstellar watchmaking specifications, which really does make the blue hue entirely appropriate.