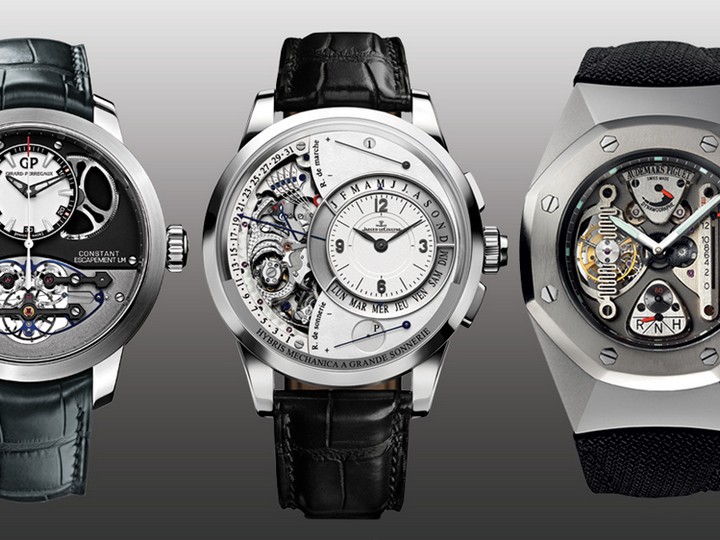 Twelve watches that rewrote the rules of horology

During this millennium, 12 key innovations have thus far made their mark on the art and science of keeping time.

In the annals of modern watchmaking, the drive for innovation has been a constant. From the first tourbillon by Abraham-Louis Breguet in 1801 to the debut of carbon and silicon components more recently, watch brands have jockeyed for position in the field. Since 2001, the Grand Prix d’Horlogerie de Genève’s Aiguille d’Or prize has been bestowed annually upon pioneers for forging new ground. During this millennium, 12 key innovations have thus far made their mark on the art and science of keeping time. Innovation: A new escapement design
Genesis: The Freak’s movement parts could not be manufactured with the materials that were considered standard at that time (aluminum, steel, and brass), prompting Ulysse Nardin to begin experiments with silicon. That and a new front-and-center escapement designed by Ludwig Oechslin introduced a vastly different way of displaying time. (from $US75,000 ($A93,100)) Innovation: The Spiromax hairspring
Genesis: To reduce wear, magnetism, and the need for lubrication, the Spiromax hairspring was created using Silinvar, a silica-based material developed by Patek with Rolex and the Swatch Group. Patek’s first applications came with its Silinvar escape wheel, the success of which led to the creation of a nonmetal hairspring. Innovation: The longest and most complex chiming of a wristwatch (also equipped with a perpetual calendar and flying tourbillon)
Genesis: A combination of new gong shapes, new alloys, and a reworked movement architecture based on the design practices of the Duomètre line — which relied on one gear train to regulate timekeeping and another the complications — led to the development of the Grande Sonnerie. (Price upon request) Innovation: Floating-lug case design
Genesis: After the successful fabrication of a silicon-and-palladium balance wheel as well as several other innovations used in its Dream Watch 1, De Bethune turned its attention to case design with the DB28. Pivoting from a central point on either side of the watch case, the DB28’s free-floating lugs adapt to any wrist motions and trim excess weight from the case. (Titanium: $US100,000 ($A124,100)) Innovation: Hydromechanical wristwatch
Genesis: After launching the micro-fluidic technology firm Preciflex (and locking down a few key patents for fluid distribution), the founders of HYT turned to the famed Renaud et Papi to create a caliber that could be mated to their hydraulic system. This innovative marriage of mechanics and fluids resulted in the ideal “water watch.” ($US59,000 ($A73,200)) Innovation: Miniaturized, chirping automaton in a wristwatch
Genesis: Saluting its automaton clocks of the 18th and 19th centuries, Jaquet Droz created what looks like a wrist-worn version of a cuckoo clock. Carbon pistons and compressed air stored in sapphire tubes work like a music-box mechanism to create chirps and control the hand-painted bird’s gestures. ($US399,000 ($A48,400)) Innovation: A silicon-blade constant-escapement mechanism that maintains accurate and equal amplitude over a 6-day power reserve
Genesis: During his stint at Rolex, the escapement’s inventor, Nicolas Déhon, built 20 prototypes using a Nivarox alloy that was unequal to the task. At Girard-Perregaux, he realized that silicon offered the ideal solution. ($US123,500 ($A153,250)) Innovation: Electronic monitoring and user adjustment of performance
Genesis: Urwerk engineered a balance wheel capable of being read by an optical sensor and a compact, case-housed generator that powered a small processor, enabling the EMC to measure and report the difference between the timing rates of the movement and the reference oscillator. Users can adjust the timing screw on the caseback to optimize performance. (From $US120,000 ($A148,900)) Innovation: Combining five particular complications into a single masterpiece: a tourbillon, fusee chain, a chronograph with a split-seconds function, and a perpetual calendar — a feat deemed impossible by many
Genesis: Starting from an earlier Pour Le Mérite caliber, Lange built the perpetual-calendar mechanism around the tourbillon to conserve space and recessed the tourbillon deeper into the movement, ensuring an optimal and efficient organisation of complications. ($US559,000 ($A693,750)