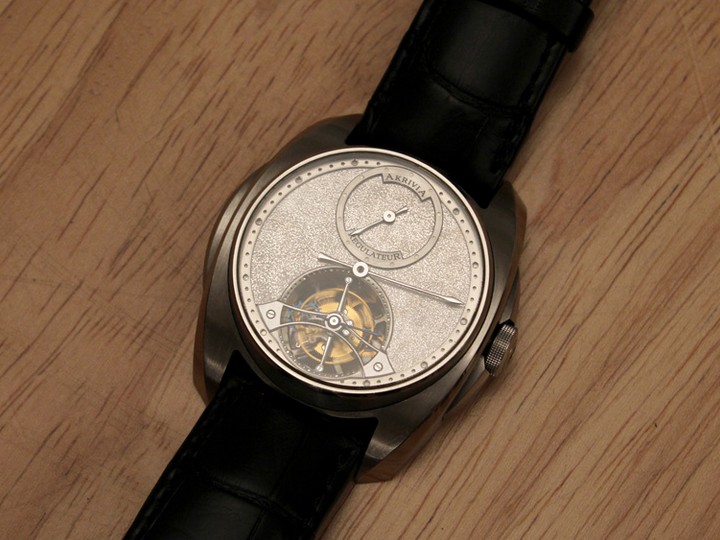 Traditional watchmaking gets a modern twist with Akrivia

Though numerous upstart watch brands have come and gone over the last few decades, few have as interesting an origin story as Akrivia Genève.

Though numerous upstart watch brands have come and gone over the last few decades, few have as interesting an origin story as Akrivia Genève. In 2012, Rexhep Rexhepi, then only 25 years of age, had already made significant headway refining his craft. Having apprenticed and worked for Patek Philippe from age 14, he followed that with a stint at the now-defunct complicated movement manufacture BNB Concept and further work for F.P. Journe.

The year 2012 was when the passionate young watchmaker decided to strike out on his own, and before long, his first release — the AK-01 — was unveiled. Even given his background in high watchmaking, Rexhepi set the bar particularly high for himself, building a tourbillon monopusher chronograph with a 100-hour power reserve and exquisite hand-finishing throughout. Fast-forward to 2017, and growth for the brand has been steady. Year one saw the production of only two timepieces, whereas 2017 is expected to see 25 pieces completed and delivered. The entire Akrivia team is now five strong, including Rexhepi’s brother Xhevdet, who completed his apprenticeship (also with Patek Philippe) in 2014. During a brief visit to Geneva last month, we visited the firm’s brand-new workshop, which they were still in the process of settling into. In a time when watchmaking production has much devolved into a compartmentalised operation, Rexhepi is still a believer in traditional practices. “Though we must still rely on some trusted suppliers for certain components, we are finishing every part we can here in our workshop by hand. We also don’t have a person for finishing, a person for assembly, and so on. Each watch is completed start to finish by a single watchmaker,” states Rexhepi. It’s become clear that Akrivia’s clients are attuned to this level of detail and finishing. Most often, clients are ordering watches cased in either steel or titanium rather than precious metals. Due to the hands-on nature of the brand’s work, the team is able to offer a certain level of customisation to its timepieces, upon request, in the form of a unique dial and hand colours and finishes. As with many brands, Rexhepi has seen an increasing demand in this category and seems unfazed by the additional work. “The process of ordering one of our watches is already so personal that if a client wants something a little different, we’re happy to accommodate when possible.”