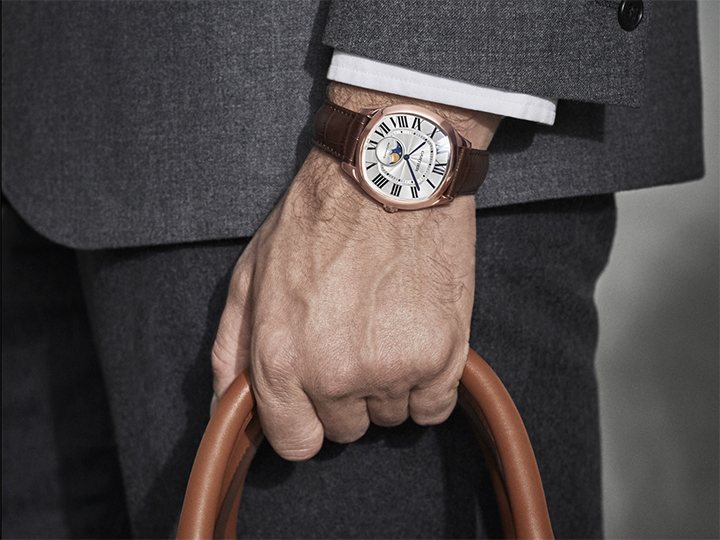 Time to put on your business face

A sports watch belongs in the boardroom about as much as a suit belongs at the beach.

A sports watch belongs in the boardroom about as much as a suit belongs at the beach. A Submariner may be lovely and all, but it’s no better a match for sleek pinstripe double-breasted tailoring than a pair of sneakers. True sophistication in the corporate environment is best expressed by an elegant timepiece on a (preferably reptile) leather strap, such as those on our list of current favourites. The new Drive de Cartier Extra-Flat won plaudits from watch aficionados and the ‘lifestyle’ set alike when it was presented at the SIHH fair in January. The geeks focused on the manual-wound, ultra-thin manufacture movement, while the fashion crowd was wowed by a level of handsomeness not seen since Derek Zoolander first busted out Blue Steel.

There are no such proletarian metals here, though; the Drive Extra-Flat, which is limited to 200 pieces and priced around $22,000, is available only in rose- or white-gold 39mm cases. With its super-slim, cushion-shaped profile snuggling unobtrusively beneath a French cuff and its classic Roman numeric dial dispensing with a seconds hand (and looking all the more elegant for it, particularly in the white-gold/black alligator strap configuration), this is pretty close to the Platonic ideal of what a professional workday watch should be. (The Drive Moon Phases edition is also well worthy of consideration – a whisker less thin and minimal than the Extra-Flat, but no less suit-appropriate.)

Indeed, 39mm is the size that very few suitable-with-suiting timepieces will much exceed. Jaeger-LeCoultre’s retro mid-century-styled Master Control Geographic meets this requirement, and also those of the wearer whose occupation demands that he keep pace with more than one time zone. And isn’t that just about all of us, these days? In a stainless-steel case on navy alligator strap (playing off the neat blue dial detailing), the dual-time Master Geographic features a world timer-esque city disc that allows easy setting and resetting of the second time zone as the need arises. Great looking, highly functional, with all the in-house horological excellence you’d expect of Jaeger-LeCoultre, it’s also amazing value at just over $12,000. Those seeking something unfussy, classic without being anachronistic, will find plenty to appeal in haute-horologist Laurent Ferrier’s latest, the curvaceous Montre Ecole, inspired by early pocketwatch-based wristwatches. Yours in a choice of steel, rose-gold and platinum (the latter crafted at request – with prices upon application). The Warren Buffett-inspired conservative type with an eye for large and long-term investments (both in the course of his work, and in his choice of timepieces) will find it hard to resist placing a buy order for a new favourite from the world’s oldest watchmaker, Vacheron Constantin: the Patrimony Perpetual Calendar, in an 18k rose-gold case with opaline slate-grey dial. It’s priced close to the $100,000 mark. Holding the title of thinnest tourbillon timepiece on the market for several years now, its movement a miniscule 1.95mm thick – and laid bare in a new, skeletonised edition revealed at the 2017 Basel fair – Bulgari’s magnificent Octo Finissimo Tourbillon is as lithe and lovely as Kate Moss at her mid-’90s, waif-chic peak. With its broad, butch alligator strap and not insubstantial 40mm platinum case, however, it’s anything but dainty. It also struts an assertive price, roughly on a par with a Porsche 911 Carrera’s. Timekeeping elegance incarnate, the automatic, COSC-certified Toric Chronométre from Parmigiani Fleurier is available in white- and rose-gold iterations, with a choice of cream grained or black opaline dials in each metal, on alligator straps from the leathergoods gods at Hermès. The Toric was the first watch designed by Michel Parmigiani when he founded his eponymous house in 1996, and it’s no less winsome in this gently updated form 21 years later. You simply can’t go past a Patek Philippe, and the clean, clear classicism of the manual-wound, yellow-gold Calatrava ref. 5119J-001, in the recently resurgent smaller case size of 36mm, sets the right no-nonsense tone for the boardroom. We’ll wager that you will be unable to resist constantly glancing at its beautiful white-lacquered dial with svelte Roman numerals, thereby giving the impression of impatience, which should keep any meeting moving along briskly. Such an increase in efficiency and productivity comes at a cost, in the vicinity of $23,000.

Finally, though we may have suggested that Submariners are to be eschewed in the corporate environment, ‘wearing the crown’ can still be relied upon to make a solid boardroom statement. From Rolex’s ultra-elegant Cellini series, consider the dual-time model in 39mm white-gold case with silver guilloché dial, its sword-like hands a nod to the line’s namesake – the archetypal Renaissance man Benvenuto Cellini, the rakish 16th-century Florentine goldsmith, sculptor, musician, artist, lover and notoriously lethal dueller. Let those timekeeping blades serve as a constant reminder to be en garde during your business dealings, and maintain – like Cellini himself – that killer edge.