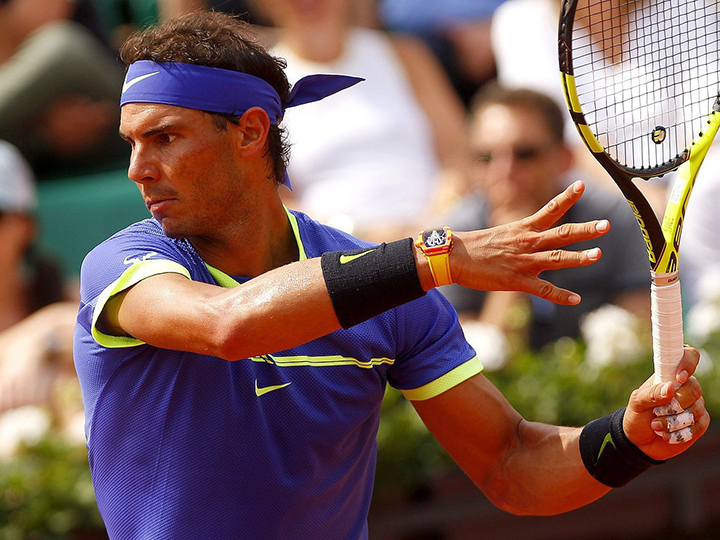 The Richard Mille watch created with sporting success in mind

Rafael Nadal acts as a “human test bench” at the highest level of sport for a watch range coined in his honour.

Rafael Nadal is an irrefutably imperious force on the courts, coming off the back of his 10th title in as many Roland Garros finals — a feat managed within a mere 13 years. The Spaniard is credited with bringing a unique playing style to tennis and despite being born a right-hander, Nadal’s career capitalised on the reach and versatility afforded by holding his racquet on the left.

Since 2010, his devastating two-handed backhand flashes a Richard Mille tourbillon up and over with every shot; leading Mille himself to comment that “Nadal can well be said to be a human test bench for this wristwatch.” This is no mere conjecture, Nadal’s service alone causes accelerative forces of up to 800 Gs and his brutal style of play means that a tumble is never too far away. When the RM 027 model first entered tennis with Nadal, it was as if it wasn’t even there. Weighing 18 grams, strap included, the black carbon piece stood out as one of the few, if not only, watches worn by a professional player during game time. Nadal’s normal usage patterns showed the tenacity of the movement which featured aluminium lithium construction found also in the Airbus A380 and Formula 1 cars, and also helped the watchmaker enhance the construction of the case, to prevent the entry of unwanted particles and moisture. The second coming of Nadal’s long-term friendship with Richard Mille featured a unique suspension method in the way the baseplate was attached to the case. In the RM 27-01, four braided steel cables, each with a diameter of just 0.35mm, were threaded then tensioned by the watchmaker using a special tool. RM 27-02, Nadal’s third, was the first instance of caseband and baseplate being formed of a single piece — unibody in automotive speak. Rigidity was exemplary, as was impact resistance and perhaps most crucially, the proofing against unwanted external contaminants, particularly the dust kicked up on the clay courts. The debut of the RM 27-03 this year proved talismanic for Nadal, as he collapsed in ecstatic triumph — in straight sets — over Stan Wawrinka after his longest dry stretch between Roland Garros tournament wins. Presented in the Spanish standards of red and yellow, the timepiece’s front and back bezels sandwiching the baseplate are formed of quartz TPT. The latter is composed of layers of parallel filaments obtained from separating silica thread which are dipped in yellow or red resin to form the alternating colours of the piece. The result in terms of shock resistance? A ballistic 10,000 Gs, due to the high performance of quartz fibres. Nadal’s all-new piece is an unencumbered hours-minutes number with a central statement feature: the highly stylised visage of a bull. A symbol of Spain and Nadal’s decidedly accurate personal emblem, the visual encircles the barrel, the great wheel and the tourbillon. Unique also is the playful take on the torque-limiting quartz TPT crown, fashioned in the shape of a tennis ball for time-setting and winding.

What lies in store for Nadal’s next Richard Mille, or indeed the future of his tennis career is for no one to say, but as anyone watching this year’s French Open final will attest, the process and result will be breathtaking to watch.