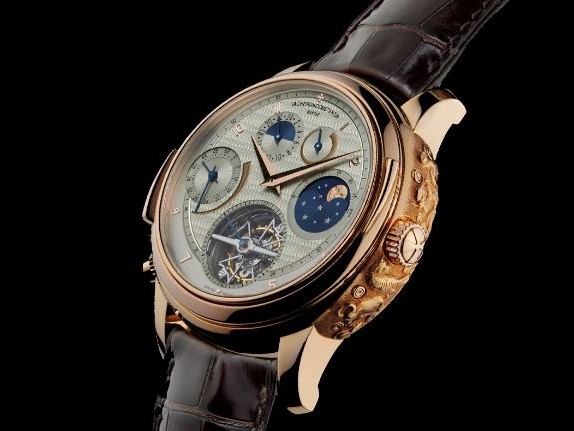 Six brands that will build the personalised watch of your dreams

Now more than ever, you can build a timepiece that is entirely unique to your specification.

There is a fundamental shift occurring in the high-end watch industry, and its name is bespoke. Sure, there is still a market for premium goods produced in volume (case in point: the five-year waiting list for the new Rolex Daytona), but more than ever, consumers are demanding goods that are truly scarce in nature, or even better, a bespoke or custom creation.

In this feature, we examine the two opposing ends of the spectrum, on one hand looking at brands that have developed a streamlined digital approach to the customisation process, and on the other we look at a handful of watchmaking houses that are more than happy to flex their creative muscles to craft a timepiece that's entirely unique to your specification. When it comes to scale of customisation, Kerbedanz goes about as far as you can get with its watches. After the client has an initial meeting with the company's chief design officer and its symbolist — a master of historic symbols of mythology, astrology, and the like — a unique design is crafted that can employ a broad range of traditional techniques, including cloisonné enamelling and high-relief engraving.

From the initial mock-up, both the movement and case are then designed to suit the overall concept. Though Kerbedanz's movements are manufactured by its high-calibre partners (Technotime and Concepto), the custom build process can take between eight and 10 weeks, as every bit of finishing as well as case and dial manufacturing are completed in-house.

To maximise its responsiveness to client wishes, the firm only works on a single watch at a time. (kerbedanz.com) Though rarely spoken of, Vacheron Constantin has been undertaking bespoke commissions of varying degrees since the brand's inception in 1755. In its modern form, the brand offers complete bespoke design at both the visual and functional level, with clients able to request specific combinations of complications or design elements to their heart's content.

The sky is truly the limit here, as was proven in late 2015 when the brand unveiled the world's most complicated pocket watch, which was completed on commission for a client. (vacheron-constantin.com) On the more straightforward end of the spectrum, Armin Strom unveiled a unique digital configurator that genuinely caught us off guard at Baselworld earlier this year. Six different models can be customised using the web-based platform starting with its manual-winding model with a five-day power reserve right up to its manufacture calibre tourbillon, which will cost just over $US100,000 (about $A130,000) in fully customised form.

The configurator lets potential buyers select from a variety of colours of PVD coating or rhodium or ruthenium plating for the movement's bridges, main plate, gear train, dial, and hands — allowing for an extensive number of unique looks based on their personal preferences. (arminstrom.com) Andersen Genève founder Svend Andersen has been on our radar for quite some time for a variety of reasons ( including his unique Eros series of watches), but a significant part of his business is dedicated to bespoke watchmaking.

His Pièces Unique series continues to evolve, and has included everything from simple custom dial work right through to complex minute repeaters and perpetual calendars. Thanks to the boutique nature of the firm, Svend prides himself on his ability to work first-hand with a client to design exactly what they have in mind. ( andersen-geneve.ch) Atelier Reverso initially started off as a small niche offering in the Jaeger-LeCoultre catalogue, however its warm reception from clients and media alike has led to significant growth in its available customisation options over the course of the last year.

Buyers can now select from six different Reverso models (in both men's and women's sizes), and then choose from 52 dials and 800 different strap configurations to build the Reverso of their dreams. Most recently, a pair of stone dials was added to the ever-growing list of possible selections. ( jaeger-lecoultre.com) Mechanical ingenuity plays a big role in Hysek's bespoke capabilities. After years of expanding its in-house calibre production capabilities, the brand has amassed an interesting array of complex movements from which Hysek can base its custom creations.

Changes in materials and finishes within the movement are just the tip of the iceberg, as its master watchmakers, engineers, and designers are always excited to turn a client's wild flight of fancy into a technical reality. (hysek.com)