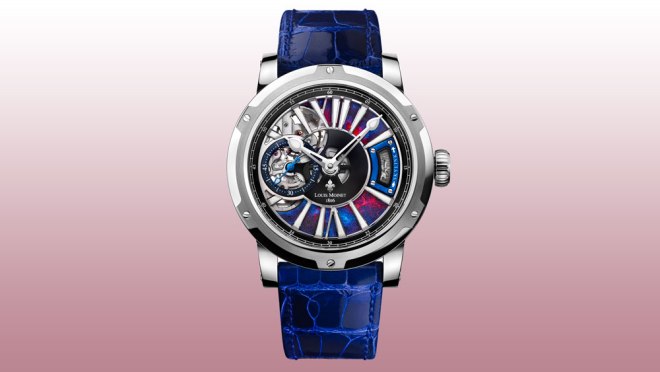 The new timepiece celebrates a groundbreaking historical event by preserving it in a time capsule.

On July 17, 1975, the unthinkable happened: In the midst of the Cold War, the U.S.A. and the U.S.S.R had a friendly rendezvous in space. Known as the Apollo-Soyuz mission, the U.S.A. launched a Saturn V from Cape Canaveral, Fla.—a “leftover” from the Apollo moon missions—and the U.S.S.R.’s Soyuz 19 launched from Baikonur Cosmodrome in southern Kazakhstan. Ultimately, they met in space, docked, and opened a hatchway that enabled a joint mission in Earth’s orbit.

In a rare moment of otherworldly peace, cosmonaut Alexey Leonov and Commander Thomas Stafford shared an interstellar handshake. Louis Moinet has chosen to commemorate that moment in its new Skylink timepiece, which contains not only a fragment of Kapton foil from the Apollo but also fibers from Leonov’s Russian Sokol-K space suit. It’s a rather extraordinary time to release a watch commemorating an amicable moment between the two countries as tensions are currently at a high, but it does serve as a friendly reminder of peace by literally encapsulating the historic moment in time. 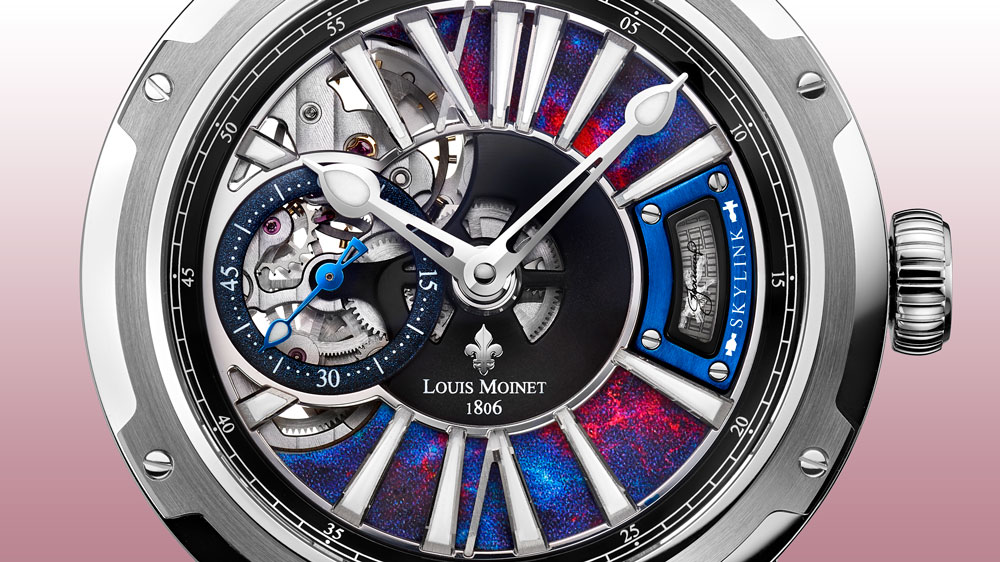 The new timepiece follows up another tribute to Leonov from Moinet called the Spacewalker—a satellite tourbillon with a sizeable orbiting diamond. It was created as an homage to Leonov being the first human to conduct extravehicular activity in space by exiting a spaceship and taking a 12-minute space walk on March 18, 1965. Like the Spacewalker watch, the new Skylink features an Aventurine dial replicating the colorful mix of dust and gases in a nebula. Graphic lacquer-coated hour markers and Louis Moinet’s signature dew-drop hands, also featured on Louis Moinet’s Metropolis timepiece, sit on top of the vivid dial. At 9 o’clock, the seconds are marked off in a counter, while directly opposite—as though illustrating the fleeting quality of time—the encapsulated Kapton foil and space-suit fibers are placed at 3 o’clock.

The 43.2 mm Skylink features 48 hours of power reserve and is limited to 19 pieces in white gold, 19 in rose gold (price upon request), and 75 in steel (€13,645 or $16,833 at current exchange)—a tribute to the year of this historical moment. It comes with a dark blue or black leather alligator strap, and the dial of each piece bears a reproduction of Leonov’s signature.