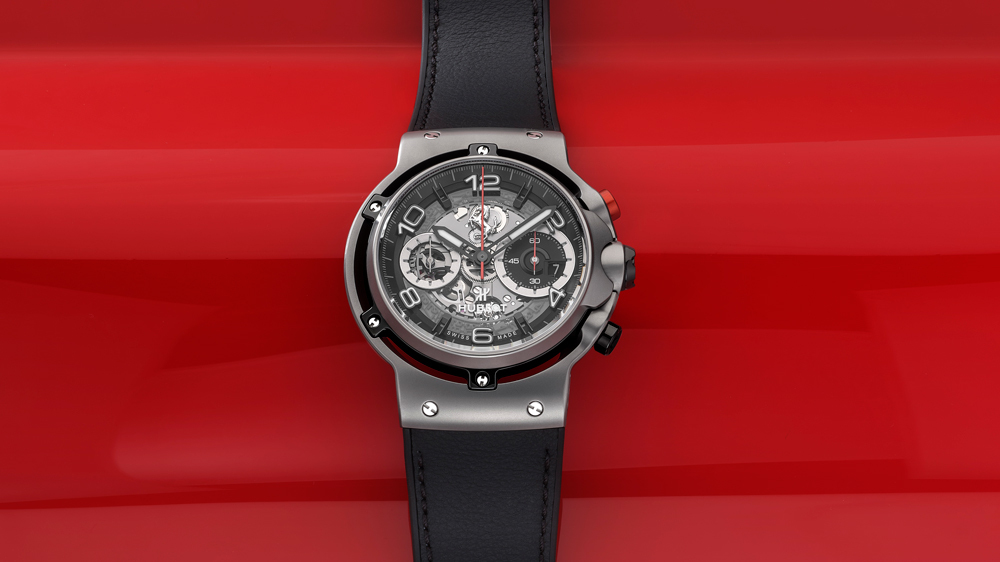 Hublot came out of the gates of Baselworld with a bang. The Swiss watchmaker unveiled an entirely new watch design in collaboration with Ferrari that is taking their eight year partnership to a new level. The new Classic Fusion Ferrari GT watch inspired by the automotive maker’s Gran Turismo series is the brand’s biggest launch of the year, and it looks nothing like any Hublot watches before it. It wears slimmer than many of Hublot’s watches at 45mm by 12.15mm and is noticeably more classic with redesigned lugs. The new timepiece owes its sleek new look to Ferrari in more ways than one: Hublot’s team did not design a watch based on the automotive brand’s signature car elements; rather, the design was driven directly by Flavio Manzoni, head of design at Ferrari, and his team.

“It’s a slimmer watch than what we normally do, and it’s a more classic design in a way,” says Hublot CEO Riccardo Guadalupe. “We’re going a step further this year and doing something inspired by their Gran Turismo, which is a car you can have today. We worked together with Ferrari on the dimensions and so forth, but really the inspiration came from the team at Ferrari.” In the past, collaborations between the two companies have included the Big Bang Ferrari, the La Ferrari timepiece with 50 days of power reserve, and most recently in 2017, the Tech Frame Tourbillon Chronograph. The latter was also designed by Manzoni and his Ferrari team, but in that case, the brand presented several designs to Hublot before the watchmaker ultimately decided the right design for its brand. This time around Ferrari chose the design and Hublot provided its engine, fitting its watchmaking technology to the Ferrari’s design specifications. “For the first time, we are really working with the Ferrari team for them to create a watch where you have the DNA of Ferrari, but also the DNA of Hublot,” said Guadalupe. “We need to be open to new ideas.” 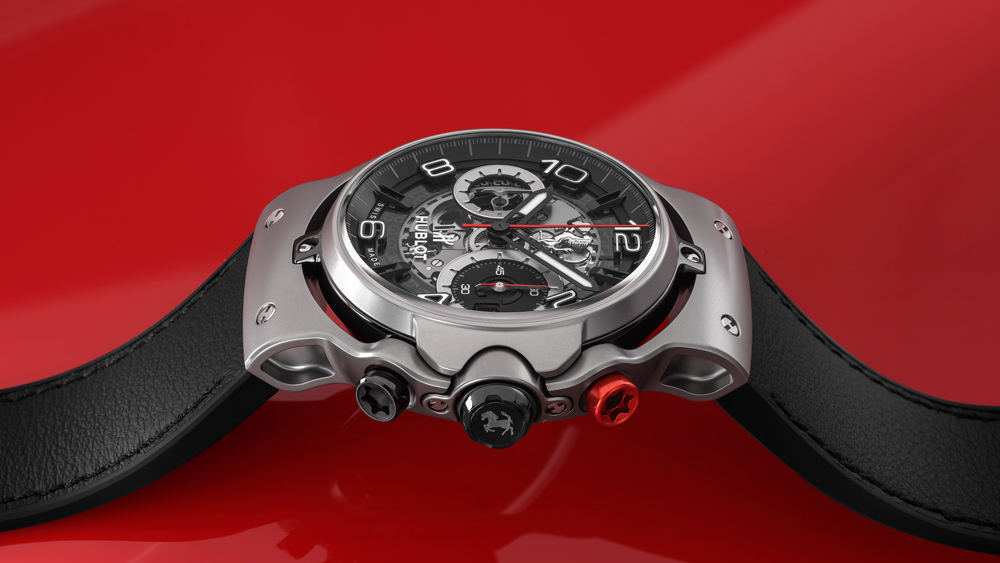 The result is a timepiece that is markedly sleeker and less busy than the Tech Frame and it should bring new clients into the fold for Hublot— not only for its design but for its more wearable size (its predecessor sat on the wrist at 14.80mm tall). Not to mention that you can get a good look beneath its hood to see the Unico HUB1280 calibre thanks to its openwork dial. The self-winding flyback chronograph has a 4Hz frequency (46,349km/h) and a column wheel that can be seen dial side. Ferrari’s prancing horse logo is seen at 12 o’clock, while a 60-minute chronograph register at 3 o’clock with a date and a running seconds at 9 o’clock. The price of this new Ferrari/Hublot watch comes in around $31,000 in titanium (limited to 1000 pieces), around $54,800 in King Gold (limited to 500 pieces), and approximately $38,500 in 3D Carbon (limited to 500 pieces). While the Tech Frame’s tourbillon significantly upped its price into six figures at around $179,200 for Titanium, around $193,000 for carbon, and around $223,000 for King Gold, Hublot’s new Ferrari watch is significantly better looking and comes at a fraction of those prices. 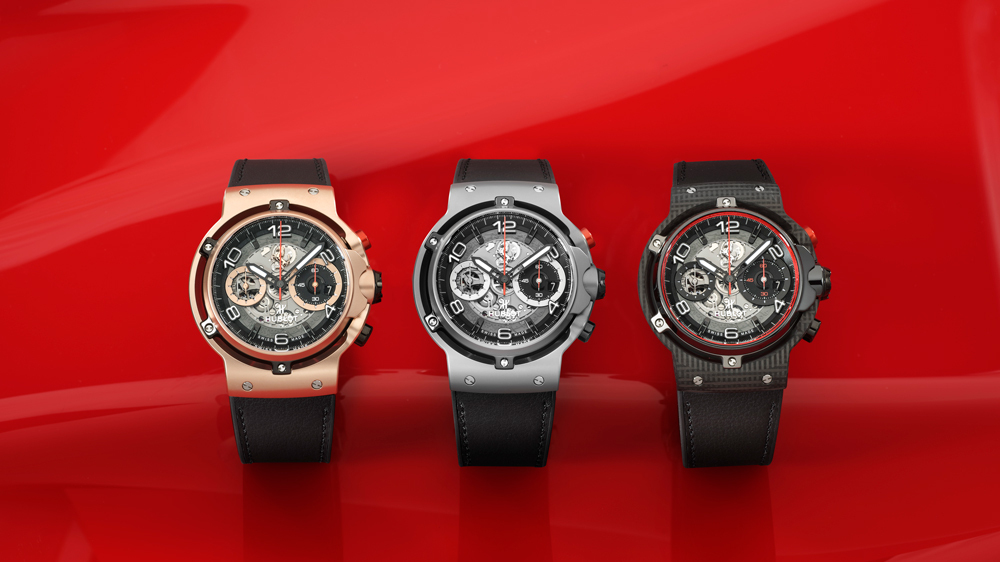 Hublot does a myriad of collaborations. They’ve included watches inspired by everything from the Hotel du Cap-Eden-Roc in Antibes and Berluti’s Scribe leather to Maxime Buchi’s tattoos, Richard Orlinski’s sculptures and Shepard Fairey’s street art, to name a few. It would seem that at least half of the brand’s releases are collaborations, which is part of the watchmaker’s strategy called “the art of fusion”—a marketing effort to infuse the creativity of other mediums into the often traditional world of watchmaking. It’s a strategy that seems to be working—according to Launchmetrics, so far in 2019, Hublot’s media impact ranks just behind Audemars Piguet and Rolex (the latter of which is still takes home the crown as the top ranking brand).