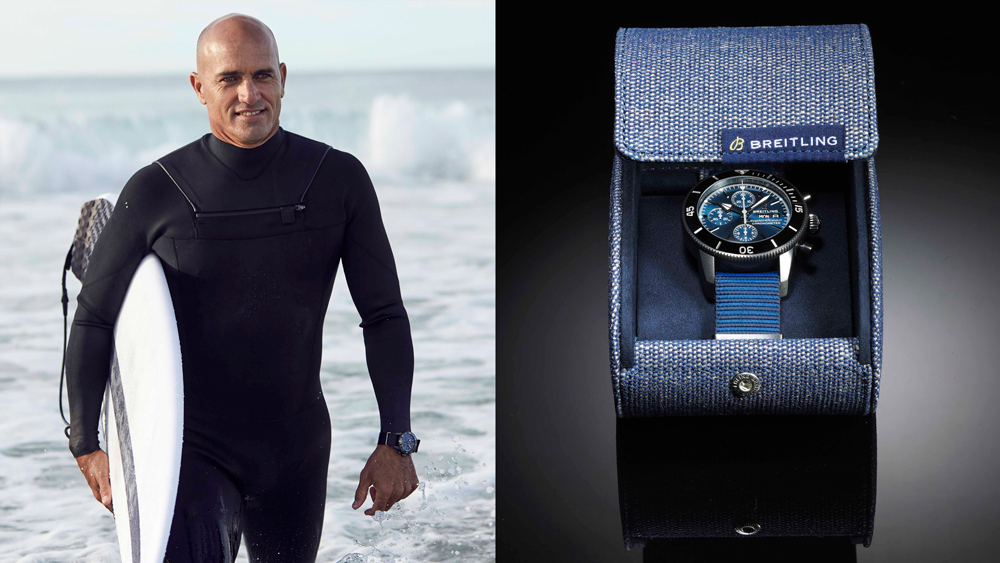 The pro-surfer is riding high with a slew of new projects beyond his surfing career.

Kelly Slater is casting a wider net these days. The 46-year-old surfing legend co-founded a sustainable and eco-friendly clothing label Outerknown and recently signed on as a brand ambassador and campaign star for watchmaker Breitling, as a member of its new “squad” concept. Now, Slater is taking sustainable materials used in the making of his clothing line Outerknown and putting a new spin on it for the watch industry.

The new Superocean Heritage II Chronograph 44 Outerknown watch comes on a strap crafted from Econyl yarn—a fibre created from nylon waste such as fishing nets and old carpet waste. The nets are donated by fish farms or are collected in the ocean. (These are known as ghost nets and there is an estimated 650,000 tonnes floating around our oceans.)

“We went and visited the factory in Slovenia, where they make Econyl, and they were really tripping out,” Slater says. “They were like, ‘What are you guys doing here? No one ever comes here.’ It was at the intake facility, so there’s no pretty showroom. You walk in and there’s guys stripping the nets down and then they’re bundling those into different sections and then they melt them down and do the whole process and turn it into a fibre.”

Slater co-founded Outerknown in 2015 after his 23-year-long partnership with Quicksilver was winding down. He tapped former design partner for his own line under the Quicksilver label, Jon Moore, to help him start the brand. “I really wanted to do something where I had full ownership of the direction,” said Slater. “I had a few pillars I wanted to build into the brand, which were social compliance, fair labour, and working with organic and recycled materials.” 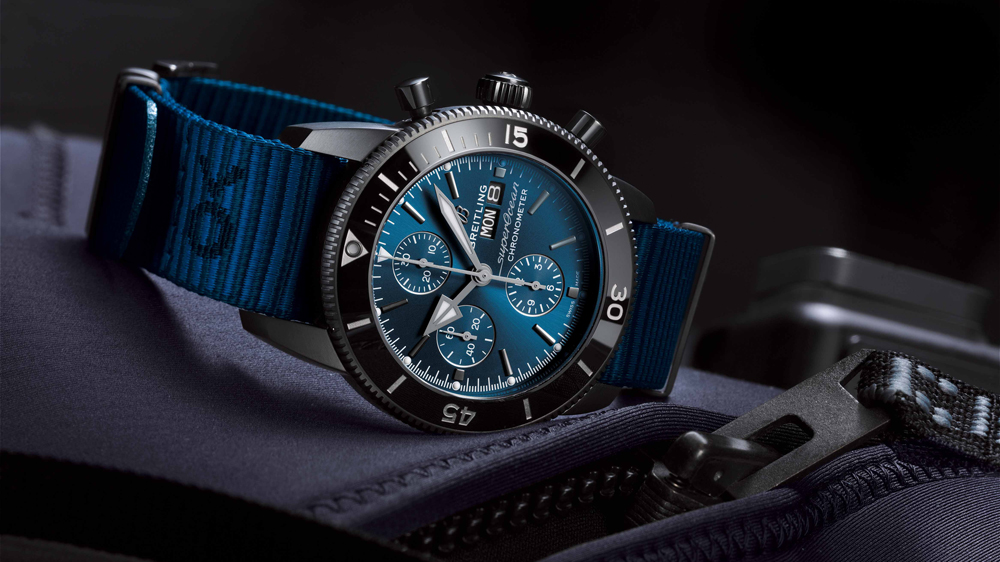 That passion bore fruit when he came on board with Breitling. Slater was originally tapped as part of Breitling’s squad team, a campaign series that groups together A-listers in their respective fields to highlight the brand. The watchmaker’s Surfer Squad includes Slater, as well as pro surfers Sally Fitzgibbons and Stephanie Gilmore. “It was nice to have this opportunity to work with Steph and Sally, who are both good friends of mine and amazing surfers in their own right,” says Slater. “Sally would probably be a multiple time world champion if it wasn’t for Stephanie. They battle pretty hard. They’re great surfers and great role models.”

The trio’s Surfer Squad campaign was just released and follows the Cinema Squad version released earlier this year starring Brad Pitt, Charlize Theron, Adam Driver, and Daniel Wu. The campaign was shot in Jeffrey’s Bay on Cape St. Francis in South Africa in one day. “The sunrise that morning was literally the most incredible sunrise I’ve ever seen in my life,” says Slater, who whipped out his iPhone to show us the stunning technicolour backdrop. “We were supposed to wrap at five and then at a quarter to five a 30-knot gale wind came in with a storm and it just started blowing everything away including our set, so we were like, ‘Ok that’s a wrap!’ It was the perfect day.” 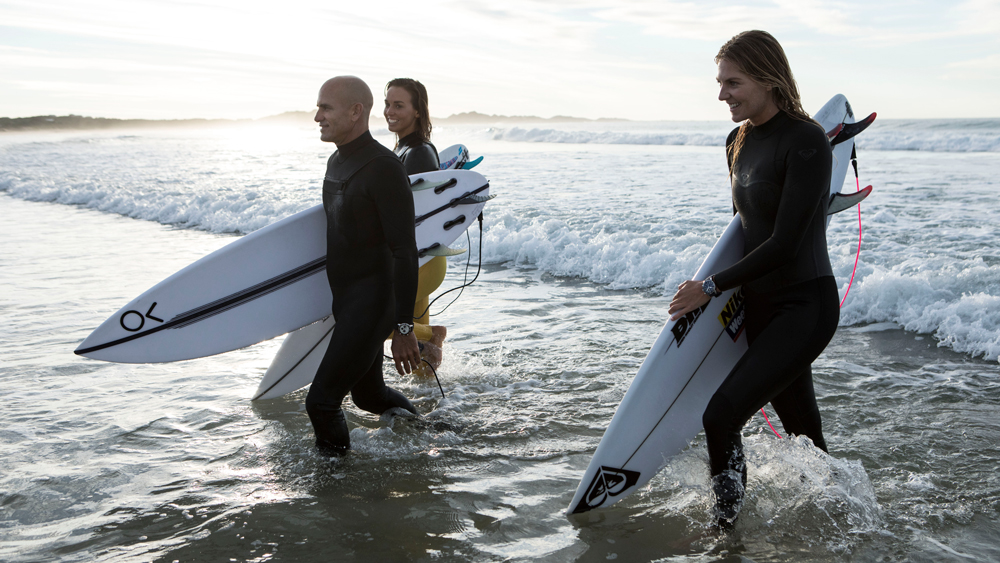 The watch collaboration that later followed happened organically, Slater says, but he wanted to focus on doing something that highlighted the use of recycled materials and ocean conservancy. (Both Slater and Breitling are involved with the non-profit Ocean Conservancy, which works to keep the clean up the world’s oceans.) “I wanted whatever we were going to create to have a vision, like our brand does,” Slater says. “We wanted it to have some kind of story that matches the other things I’m doing in my life.”

The collaboration marks the first time Breitling has ever collaborated with another brand on a timepiece and the watchmaker says it has plans to make other watch straps using Econyl on some of its watches going forward. It also marks the first time Slater has ever been sponsored by a watch company. “I’m not a watch connoisseur, but it’s an essential thing for me because I compete in 30-minute blocks of time, so I always have to have some kind of timepiece. When I compete, I always wear a watch,” he says.

The last time Slater tried to go surfing in a high-end watch (pre-Breitling campaign), however, it went overboard and sunk to the bottom of the ocean. “A guy who used to make my surfboards and who is kind of like my dad, gave me a watch when I won my fifth world title, and I went out surfing with it, but I didn’t trust the band so I took it off and put it in the closed locked latch of the jet ski I was riding,” the surfer says. “I was driving and I got hit and it flipped the jet ski. The latch opened and the watch got lost in the ocean.” Good thing he’s making his own straps now. 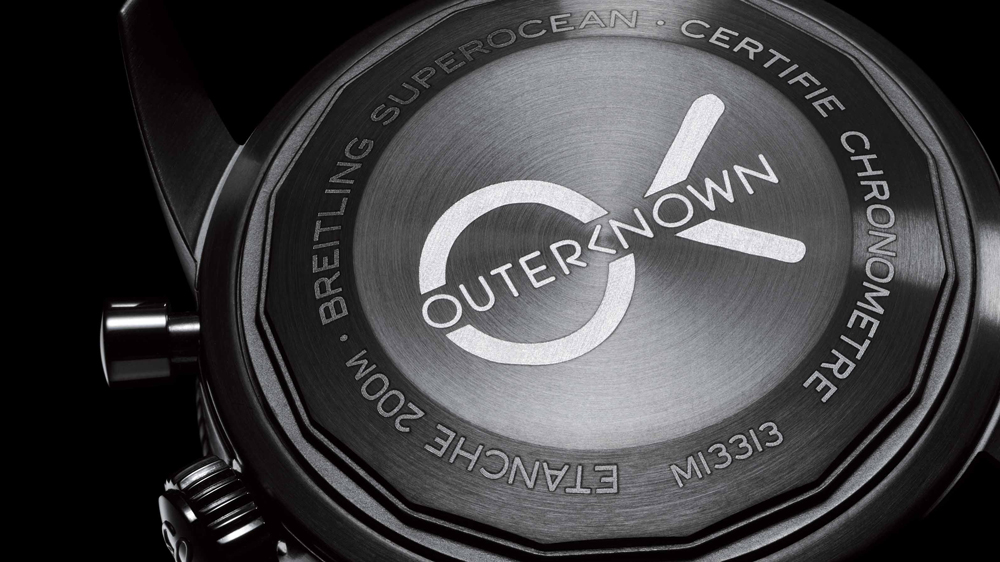 The Superocean Heritage II Chronograph 44 Outerknown ($9350) is a diver’s watch, water resistant up to 200 metres, powered by Breitling’s Caliber 13 mechanical chronograph movement. It comes in a stainless-steel case, engraved on the back with Outerknown’s logo and is topped off with a scratch- and shock-resistant unidirectional ceramic bezel. Its Super-LumiNova coating on the hour and minute hands emit a blue light in the dark, instead of the standard green typically used in watchmaking.

The watch is available through Breitling boutiques, but on December 12th, the watch will be sold on Outerknown’s website. Breitling and Outerknown will make a joint contribution of US$1,000 to Ocean Conservancy for each watch sold on that day.