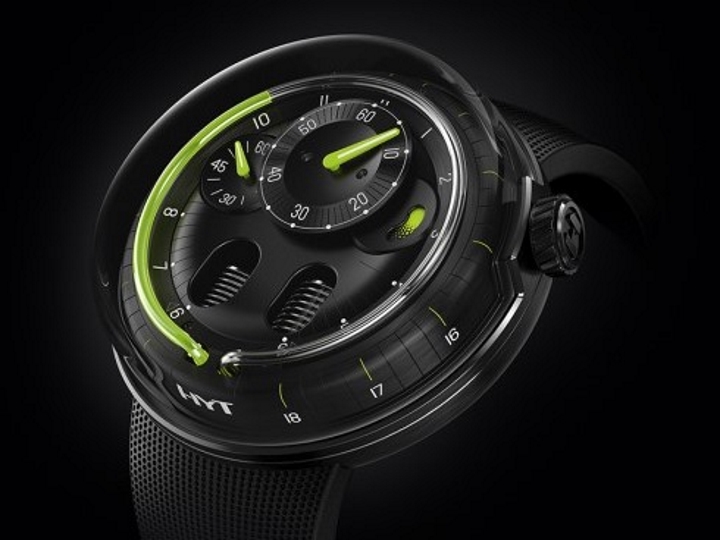 Now more than ever, buyers are flocking toward limited edition watches in droves.

Limited-edition watches have always been popular among watch collectors, but now more than ever, buyers are flocking toward them in droves. Releases from Vacheron Constantin and Richard Mille (among others) blew enthusiasts and collectors away during SIHH in Geneva, and brands like HYT and Arnold & Son have been teasing new releases ahead of the 2017 Baselworld Watch & Jewelry Fair that will be limited to as few as 15 pieces each.

“It’s not necessarily to do with being the most complex watches on the market, but we’re certainly seeing an uptick in sales when it comes to high-quality watches that are being produced in limited numbers,” states Leon Adams, owner of Cellini Jewelers in Manhattan. Here is a quick look at some of the rare timepieces we are most eager to see first-hand.

HYT has taken a distinctly minimal approach to the new H0 (pictured above), though it still speaks the brand’s unique and unmistakable design language. Resting under a massive domed sapphire crystal, the watch’s raised subdials indicating seconds, minutes, and power reserve rest just inside the trademark fluid tube used to indicate the current hour. Unlike past models, HYT opted for a lugless case design on the new H0, which will help improve fit and comfort compared to the brand’s previous 48 mm models. Only 15 examples of the $US55,000 (about $A72,000) watch in each of the three color variants will be produced for the global market. (hytwatches.com) The Romain Gauthier Insight Micro-Rotor embodies the observation made by Mr Adams of Cellini regarding collector demand for simple and well-executed limited-edition watches. The new timepiece is powered by an in-house twin-barrel, micro-rotor movement carrying an 80-hour power reserve housed within a conservative 39.5 mm platinum or 18-karat red gold case. The beautifully simple time-only piece will come in three different dial variations: black, white, or blue enamel. Priced at $US88,511 (about $116,000) for platinum and $US75,435 (about $A99,000) for red gold, both versions will be limited to 10 pieces in each dial color. (romaingauthier.com) Arnold & Son is expanding its existing DBG model line with a skeletonized take on the classically designed timepiece. This latest version, the DBG Skeleton (which derives its nominal acronym from the combination of a double balance wheel and a GMT function) bears a much more contemporary aesthetic than past entries in the collection. Available later this year, the watch will be limited to 30 examples. (arnoldandson.com) Known for its clever digital hour displays, MCT’s latest model, the Dodekal One D110, puts the feature front and centre on its dial, adding to the piece’s legibility compared MCT’s earlier creations. Inspired by the obscure digital mechanical watches of the 1970s, creations from Manufacture Contemporaine du Temps (MCT) are unique pieces that simply cannot be mistaken for anything else on the market. As with past models, the new release will be capped at a total of 25 pieces of each colour. (mctwatches.com) Taking a similar approach as Arnold & Son, Chronoswiss’s new Sirius Flying Grand Regulator Skeleton is a skeletonized adaption of the brand’s Regulator model from last year. Capped at 30 pieces, the new model has increased in size to 44 mm in diameter, allowing its wearer a clearer look at the movement’s inner workings. The watch will be limited to 30 pieces in stainless steel ($US9675 or about $A12,700) and capped at 10 examples in red gold ($US20,675 or about $A27,100). (chronoswiss.com) Not only does the Graham Geo.Graham Orrery Tourbillon Astronomical Watch ($US330,000 or about $A432,850) garner interest for its eight-piece production run, but also because astronomical complications have been getting more and more attention of late. The piece displays the orbit of Mars, Earth, and the moon as they circle the elaborately adorned tourbillon at the center of its dial. Earth is represented by a polished orb of Kingman turquoise, while the moon and Mars are each crafted from meteorites that are said to have originated from their respective planets. (graham1695.com)