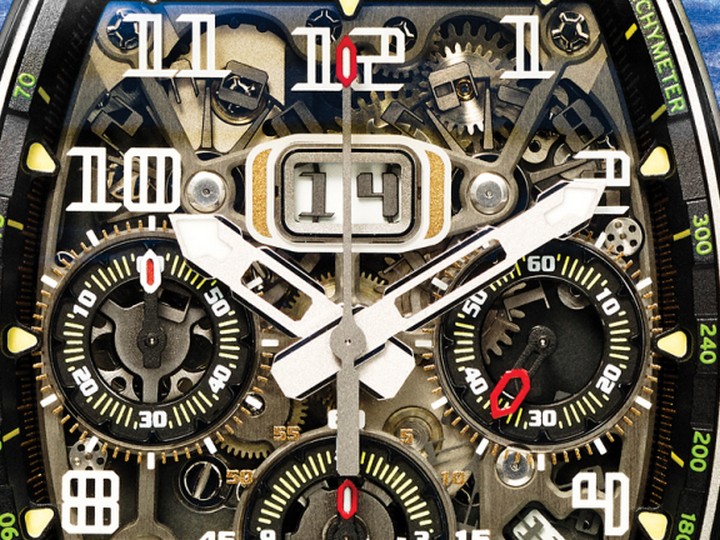 Eleven watches with cars as their inspiration

A number of high-profile collaborations make it an exciting year for watch enthusiasts with a penchant for speed.

Automotive partnerships continue to play a significant role in the watch industry, though some brands are taking less-conventional approaches to this long-standing trend. In 2017 we’ve seen cutting-edge materials from the auto industry crossing over to movement components, seat stitching techniques being used for watch straps, and even automotive design teams taking on the case and dial creation of a new timepiece. It’s been an exciting year all around, especially for the many watch enthusiasts out there with a penchant for speed. Rather than collaborating with one of the many legendary racecar drivers, Richard Mille opted to recognise Jean Todt — the former director of racing for Ferrari and Peugeot Talbot Sport and the current president of the Fédération Internationale de L’Automobile — by designing a trio of limited-edition releases. Todt and Mille forged a strong friendship over the years through their shared passion for motorsports and obsessive pursuit of perfection. Cased in vibrant blue and white TPT quartz — a quartz-and-carbon compound — the piece is as much a nod to Todt’s favorite colors as to his successes during his stint with Peugeot. The fine mastery of machining and an obsession with all things motorsports have fueled BRM’s French manufacture since its inception in 2003. Over the years, the company has created limited-edition pieces for Corvette, Gulf, and Martini Racing; become the official timekeeper of the famed Nürburgring; and, most recently, signed on as the timekeeping sponsor of the Pirelli World Challenge racing series. This recent Martini Racing chronograph (US$8,950 ($A11,700)) is limited to 150 pieces and bears the classic logo and livery details familiar to fans of motorsports. First launched in 2011, Ralph Lauren’s Automotive line of watches uses high-level mechanical calibres from Le Cercle des Horlogers. With the January 2017 introduction of the RL Automotive Double Tourbillon (US$99,000 ($A129,150)), the brand achieved a new pinnacle in horology. The hefty 45 mm piece in black shot-blasted steel once again references one of the rarest and most highly praised cars in Lauren’s personal collection: the 1938 Bugatti Type 57SC Atlantic Coupe. Chopard has been a partner and the official timekeeper of the Mille Miglia — the famed Italian open road race — for nearly 30 years now. Each year, the brand issues a new edition in the Mille Miglia series; the latest release (US$6,840 ($A8,900)) features a silver-toned, perlage-finished dial and a tire-tread-patterned rubber strap. Shortly after Bovet’s owner, Pascal Raffy, crossed paths with Paolo Pininfarina in 2007, the wheels of this collaborative effort were set in motion. Pininfarina’s firm — renowned for its long legacy of coachwork design — was looking for a partner with whom to develop a watch, and after a brief acquaintance, the two men recognised that their brands were a natural match. Refreshed with a blue DLC titanium case, the 2017 OttantaSei (US$173,000 ($A225,700)) is equipped with an exquisite 10-day flying-tourbillon calibre. The rare and elusive 1935 Bugatti Aerolithe is the stuff of collectors’ dreams — and a perennial inspiration for Michel Parmigiani. The watchmaker’s latest Bugatti-inspired piece (US$22,900 ($A29,900)) speaks not only to the marque’s long legacy but also to its gift for balancing unbridled performance with superlative artisanship. The timepiece’s grade-5 titanium case houses a dial that was finished using a new laser process created by Parmigiani to replicate the diamond pattern found on Bugatti’s upholstery— a motif that also adorns its calfskin strap. A product of the ongoing partnership between these two important Italian brands, Bulgari’s Octo Maserati GranSport (US$12,800 ($A16,700)) elegantly blends the aesthetics of an automotive tachometre with the function of a wristwatch. A large minute hand sweeps across the textured black DLC retrograde dial, while a large aperture at the 3 o’clock position displays the current hour. For those seeking a less sporty aesthetic, a pink-gold variant with a brushed black dial and brown leather strap is also available (US$30,700 ($A40,100)). Handing over the reins of watch design to a team of automotive specialists is both a novel and a risky proposition, but with the Techframe (US$127,000 ($A165,650)), Hublot managed the experiment successfully. Housed in a case modeled on a roll cage, the watch sports a trigger-style hinged chronograph pusher and gear-train bridges that mimic the reinforcing supports beneath the bodies of Ferrari’s modern machines. These elements convey the Techframe’s automotive origins without straying too far outside Hublot’s aesthetic guidelines. In comparison to its competitors, Bell & Ross has been taking a unique approach to its automotive-inspired timepieces. Rather than partnering with another brand, designer, or racing legend, Bell & Ross conceived its own concept car from scratch; this vehicle, in turn, served as the model for the AéroGT watch line. Unorthodox? Yes. Does it work? Absolutely. The BR 03-94 AéroGT Orange (US$8,800 ($A11,500)) is a charming and well-executed skeletonised self-winding chronograph that doesn’t pledge its wearer to membership in any automotive cult. When Singer Vehicle Design founder Rob Dickinson decided to create a watch, he knew there could be no half measures. Together, he, Agenhor (the award-winning movement-design firm of Jean-Marc Wiedderecht), and watch designer Marco Borraccino conceived a boundary-pushing chronograph with vintage-inspired details and a unique dial layout that places the 60-hour chronograph front and centre. The Singer Track1 (US$41,000 ($A53,500)) is to the watch industry what a Singer Porsche is to the world of sports cars: a piece of history powered by the future. Few brands share the synergies that exist between Roger Dubuis and Lamborghini. The first offspring of this newly minted partnership, the Excalibur Aventador S (US$194,500 ($A153,700)) boasts movement architecture designed to replicate the aesthetics of the Aventador’s rearward engine bay and cross braces. Rather than adding a partner logo to an existing timepiece, Dubuis plans to create unique movements and designs in partnership with Lamborghini — offerings that will likely be timed with the release of the marque’s vehicles over the next five years.