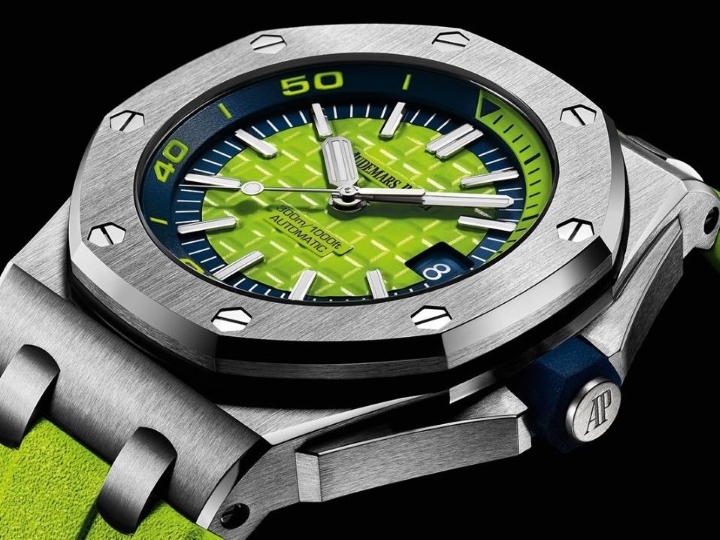 Eight intriguing watches you may have missed at SIHH

From a stellar electric-green diver, to an over-the-top astronomical complication, here is a selection of pieces you should be keeping an eye out for.

There is no arguing that Geneva was buzzing as it played host to the Salon International de la Haute Horlogerie (SIHH). The show floor itself was positively crammed with media members and enthusiasts all focused on getting a closer look at the year’s most anticipated watch releases. And while we have already shown you the home runs that grabbed everyone’s attention, there were plenty of other noteworthy pieces shown both on- and off-site. From a stellar electric-green diver, to an over-the-top astronomical complication, here is a cautiously curated selection of pieces you should be keeping an eye out for in the coming months. This past year, Zenith launched a collaboration with Range Rover that left many struggling to grasp the commonality between the two brands. However, the most interesting feature of that piece was its use of a ceramised aluminum case. Now, the brand has launched the Zenith El Primero 36’000 VPH “Panda” models, a duo of contrasting chronographs that utilize the same case as the Range Rover version while ditching the automotive angle in favour of a pair of vintage-inspired “Panda” and “Reverse Panda” dials (aptly named for its similar colouration as the adorable endangered creature). Powered by the brand’s tried-and-true high-beat automatic chronograph caliber, the new models are destined to find fans in those more familiar with Zenith’s heyday in decades past. (zenith.com) Jaeger-LeCoultre has paid close attention to trends in the vintage segment over the past few years, so when it came to redesign the Master Control collection, the company drew just enough influence from older timepieces without pigeonholing the piece as a vintage reissue. Although the brand also launched a three-hand model and a dual-time model, the Master Control Chronograph — measuring 40 mm in diameter and a modest 11.7 mm thick — is a perfect candidate for someone seeking both style and versatility. Consider this your office hours through happy hour watch. (jaeger-lecoultre.com) While Bovet is never one to disappoint with its elaborate creations, this year the company introduced an intriguing new complication that we would have expected to grab much more attention than it did. The Récital 20 Astérium not only features a brilliantly finished 10-day flying-tourbillon movement with an annual calendar and other astronomical complications, it also displays a night sky chart presented prominently at the 12 o’clock position. There is something particularly unique about Bovet’s ability to create such elegant and complex creations that always stay true to their classical DNA. So even if you are not a long-time follower of the brand, this new complication is hard not to love. Bovet will create 60 examples of the new piece with a price tag of $US350,000 (or about $A456,700). (bovet.com) Though the new Audemars Piguet Royal Oak Offshore Diver is not technically breaking any new ground, fans of bold colour should be pleased by the new variations of the iconic collection’s three-hand version that expands on the neon chronographs launched last year. The watch is a comfortable 42 mm in diameter and is water resistant up to 300 metres — the same as previous versions. But there is one noteworthy change from the 2016 launches: Last year the neon green could only be purchased at Audemars Piguet’s Geneva boutique, whereas this time around the green is fair game at the brand’s boutiques around the globe. Considering this is turning into “the year of green” rather quickly, this is a smart play on the company’s part. Production volume has not been disclosed, but the new dials are priced at $US19,900 (or $A25,975), except for the white model, which will retail for $US19,000. (audemarspiguet.com) While Bulgari usually launches its new releases at Baselworld, the brand gave us a taste of what is to come by unveiling one of its new collections in Geneva outside of the halls of SIHH. The new Octo Roma line is a slightly subdued take on the heavily faceted and angular Octo pieces in the current repertoire. Initially offered in a three-hand configuration with date, the new timepiece is a little more under-the-radar than its siblings, broadening its appeal as a daily wearer. It is being offered in steel, two-tone pink gold and steel, or pink gold, with black, white, and brown dial options available. (bulgari.com) We told you the green revolution was coming, right? Piaget introduced a slew of new Altiplano models to celebrate the 60-year anniversary of the series, but the svelte yellow-gold Piaget Altiplano 40 mm 60th Anniversary Edition stole the show. Much like the new green-dialed Glashütte Original Sixties Iconic Square chronograph that was unveiled last week, Piaget went for a deep forest green with a sunburst finish that is the perfect pairing for a wide assortment of attire we have been seeing on runways around the globe. Fashion aside, it is powered by the new ultraslim Calibre 1203P automatic movement, allowing the brand to keep the new piece ($US25,200 or $A32,885) down to an impressive 3 mm thickness. (piaget.com) Another brand that we are expecting an impressive showing from at Baselworld is Hublot, which rolled out a few interesting goodies in Geneva’s harbour that are worth keeping an eye out for. The Magic Gold version of the Big Bang Meca-10 certainly drew a fair bit of attention, but it was the addition of the Hublot Big Bang Unico GMT Titanium that caught our eye from both a functional and aesthetic standpoint. The chunky casual piece uses two separate pushers for quick forward and reverse adjustment of the GMT hand — a feature that on dressier GMT watches would look foolish, but in case of the Big Bang works quite well. (hublot.com) We have been seeing more and more brands offering men’s (or unisex) watches in reduced case sizes of late, and this Vacheron Constantin Overseas Small Model Without Diamonds was one of a few that surfaced at SIHH. During the major relaunch of the Overseas collection in 2016, a 37 mm women’s model hit the market with a diamond-set bezel (shown above), but the brand has forgone the bling in 2017, making the piece hugely more appealing for both genders wanting a more conservative case size for the casual-wearing piece. Much like its larger siblings, the 37 mm watch ($US18,900 or $A24,660) will be sold with three quick-change straps: rubber, leather, and steel bracelet. (vacheron-constantin.com)