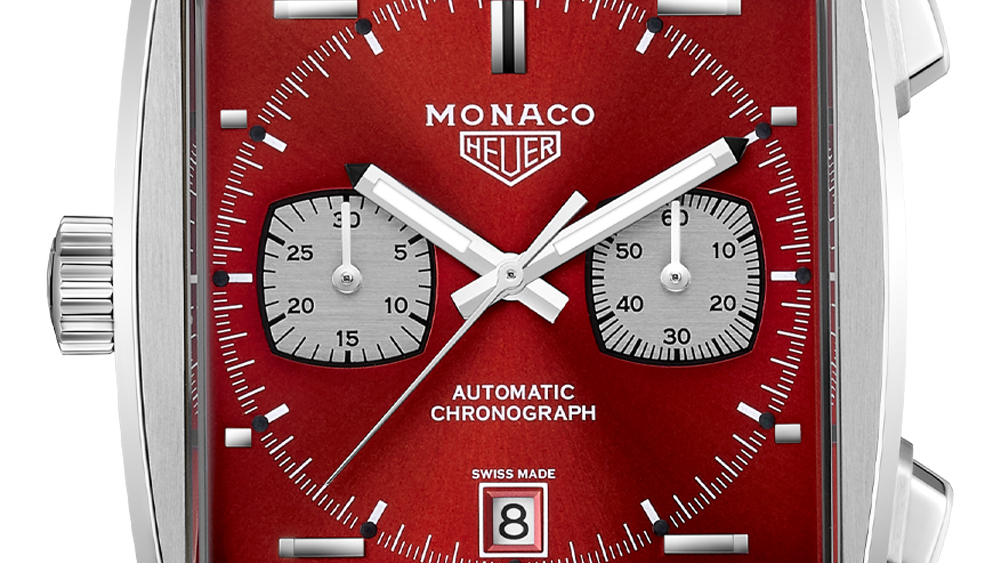 Race cars and watches have a lot in common: performance, precise engineering, investment potential and most of all, eye-catching design. You could argue that before the golden age of auto racing in the 1960s and ’70s, some wristwatches were boring and conventional. Once race car drivers got their hands on them and started using them to time laps and calculate speeds, watches got a lot sexier, reflecting the power and performance of the track. Strap on one of these auto-inspired watches and you can easily imagine yourself navigating the asphalt at top speeds, or at least navigating the rat race in style. 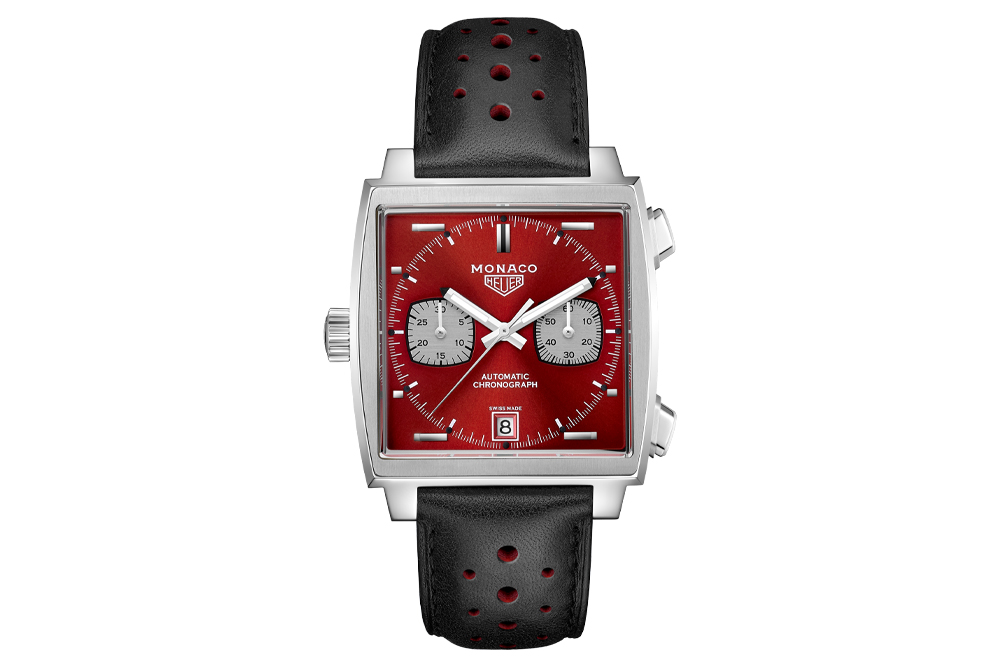 This is the second of five limited-edition Monacos TAG Heuer is releasing throughout the year to commemorate the model’s 50th anniversary. It was launched at a party in Le Mans, France, the setting for the 1971 film Le Mans, in which the Monaco was worn by Steve McQueen. It was the first water-resistant square watch and the first with an automatic chronograph movement. The racy red dial is paired with a perforated black calfskin driving strap, with pushers on the right and a crown on the left, just like the original. It contains the automatic chronograph calibre 11, with a 40-hour power reserve. Limited to 169 pieces, it retails for $8600. 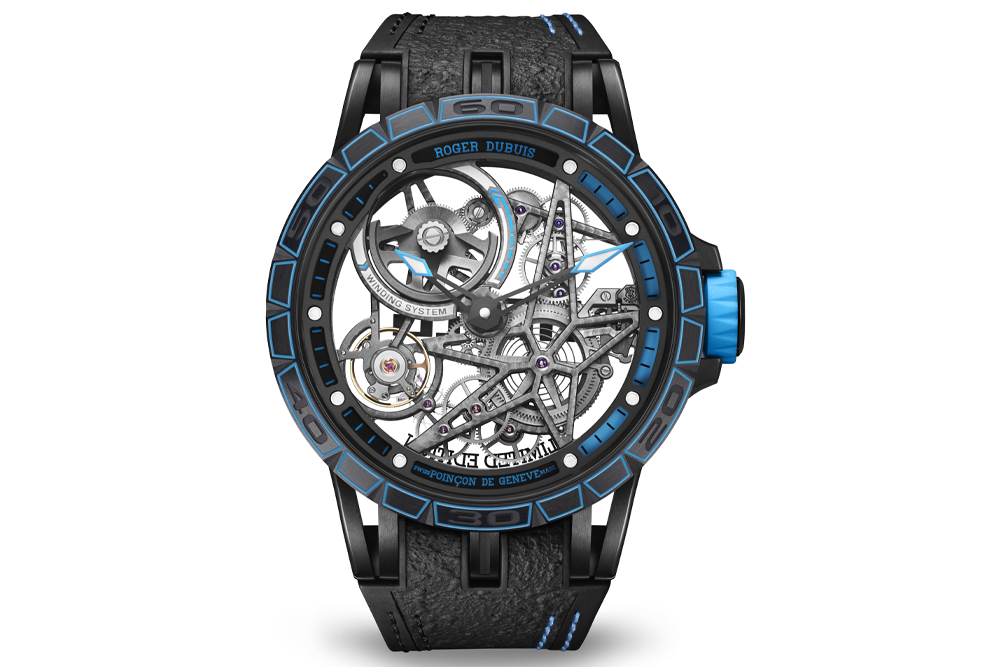 The Excalibur Spider Pirelli limited series comes with a special souvenir from the world’s top speedways. Each piece comes with a strap made of rubber inlays from certified Pirelli Formula 1 Race tires that have competed in—and won—actual races. They’re also stamped with the Pirelli identification code that corresponds to the tire. A quick release system means the strap can be changed out in three seconds—the same amount time it takes to change a tire during an F1 pit stop. The case is black DLC titanium, with a blue rubber crown and bezel highlights. It is limited to 88 pieces, priced at around $135,000. 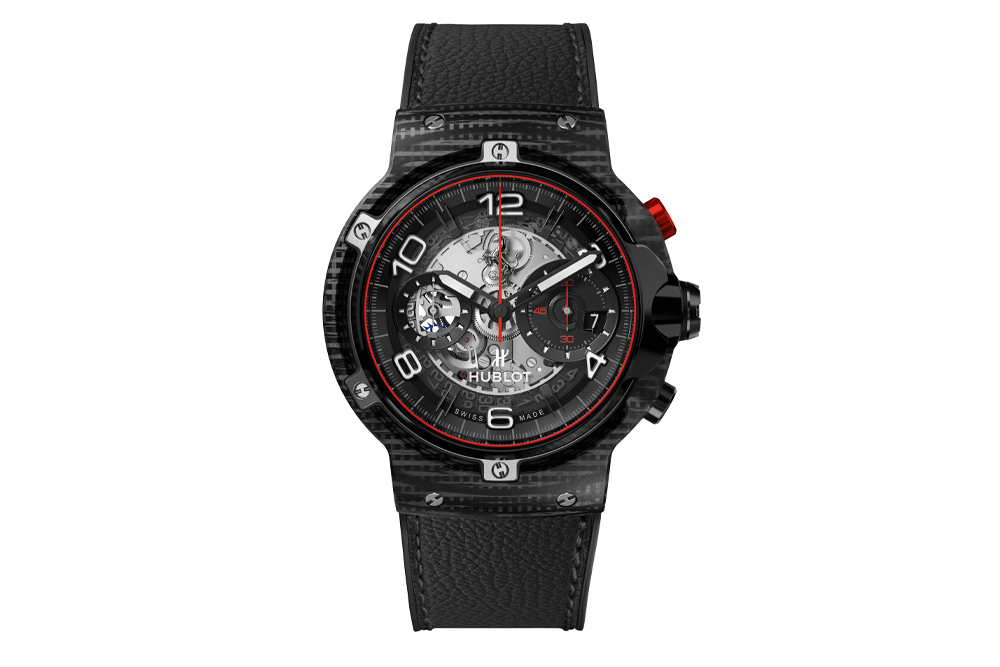 Hublot and Ferrari began their partnership in 20ll, but this is the first Classic Fusion model in their series of co-designed watches. In keeping with Ferrari’s luxury Gran Turismo cars, built for long-distance driving at high speeds and in comfort, the new model is from the Classic Fusion collection which, despite its contemporary design, it is a touch more refined than previous Ferrari models in the sportier Big Bang collection. Just as GTs are limited-production, high-performance luxury cars, the watch is limited to 500 pieces in 3D carbon, a lightweight material used in motorsports. The black rubber strap is layered with Schedoni leather, like the seats of the Ferrari Maranello GT cars. It will retail for around $39,000. 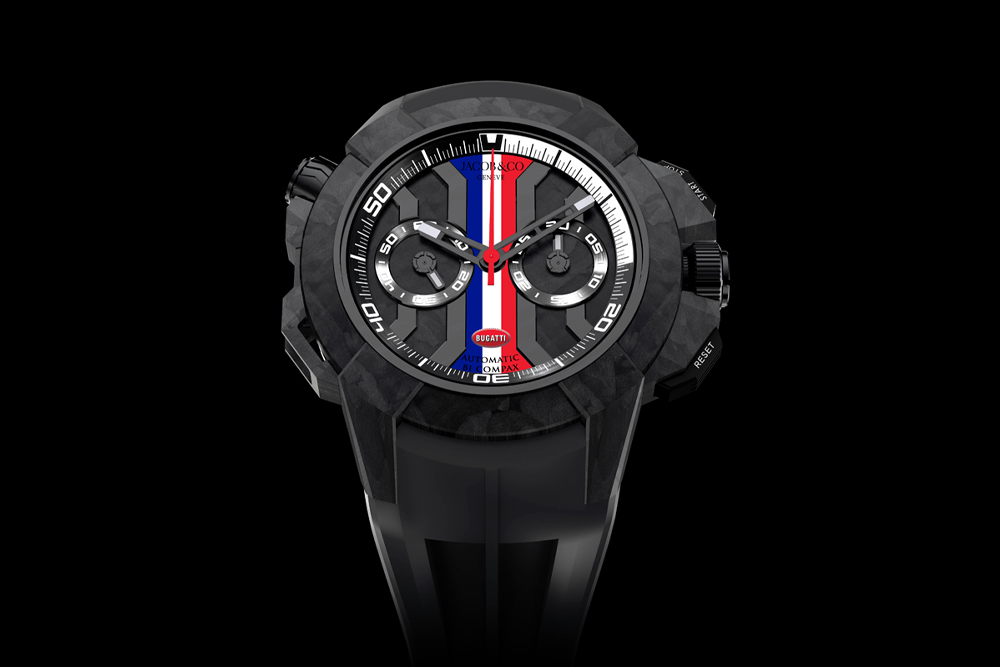 Jacob & Co.’s new partnership with Bugatti begins with an anniversary edition that celebrates the auto maker’s 110th year. The racing stripe down the centre of the dial matches the colours of the French flag—the company was founded in France by the Italian-born Ettore Bugatti in 1909. The case is forged carbon, with a rubber strap inspired by the rear end of the Bugatti Chiron. It contains the calibre JCAA05, a skeletonized self-winding column-wheel chronograph movement with a 48-hour power reserve. Limited to 110 pieces, it is priced at around $52,000. 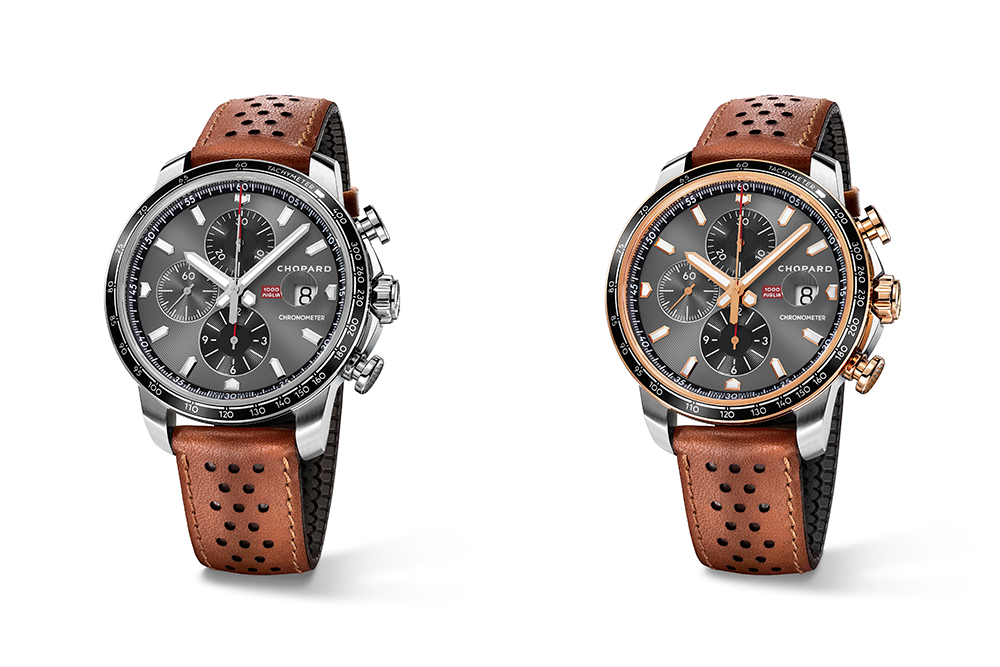 Chopard creates a new chronograph every year to celebrate its decades-long sponsorship of Italy’s Mille Miglia, the scenic car rally that goes from Brescia to Rome and back. This year there are two versions: 250-piece edition in steel and 18k gold; and a 1000-piece edition in steel. Both watches have a 44mm case and 100-metre water resistance. They also contain a COSC-certified automatic movement with chronograph and date functions and a two-day power reserve. Hands and markers are liberally coated with Super-LumiNova. The stainless steel version retails for around $10,600. The version in rose gold and stainless steel is roughly $15,700.