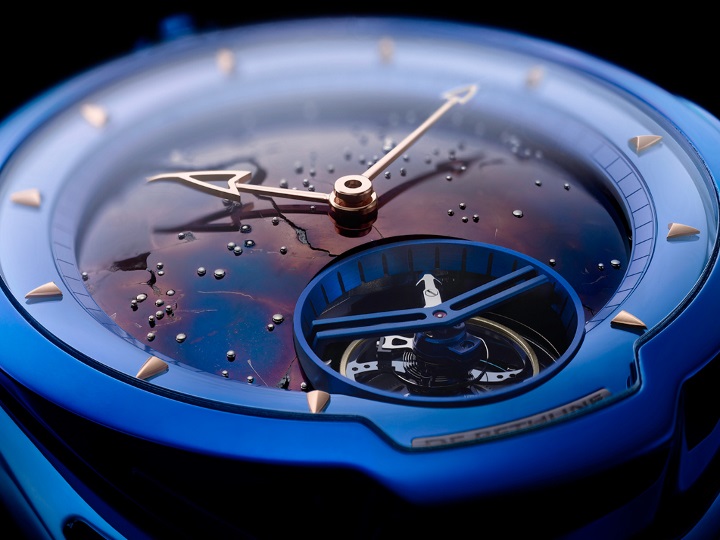 From Jaeger-LeCoultre's Master Calendar to Parmigiani Fleurier's Tonda 1950 Meteorite, watches sporting unique meteorite dials are proliferating throughout the industry. That said, most current watches with these otherworldly dials are finished with a Widmanstätten pattern — created by etching a cross-section of meteorite with weak acid. De Bethune has opted for a completely different appearance for its latest unveiling, though this is not the first time we have seen the company work with the material in this way. Just over a year ago, the brand unveiled an updated, one-off variant of the Dream Watch 5, $US446,000 (about $A587,500), whose case was made entirely from a bluish-purple meteorite.

This time around, the brand is slightly less ambitious in its use of the rare type of ferrous meteorite — taken from a space rock originally unearthed in Santiago del Estero, Argentina — for the new DB28 Kind of Blue Tourbillon Meteorite. Due to the unique colouration of the meteorite in question, pairing a dial of this precious material with the original DB28 Kind of Blue case is a match made in heaven. The DB28 has seen a wide assortment of variations in recent years, but by all accounts the Kind of Blue Tourbillon Meteorite is now the champion of the line.

It is powered by De Bethune's DB2019v3 30-second tourbillon calibre, which when fully wound is good for a power reserve of five days. Offered as a unique piece with a retail price of $US278,000 (about $A366,200), we have no doubt that the new one-off piece will find a new owner in no time. (debethune.com)