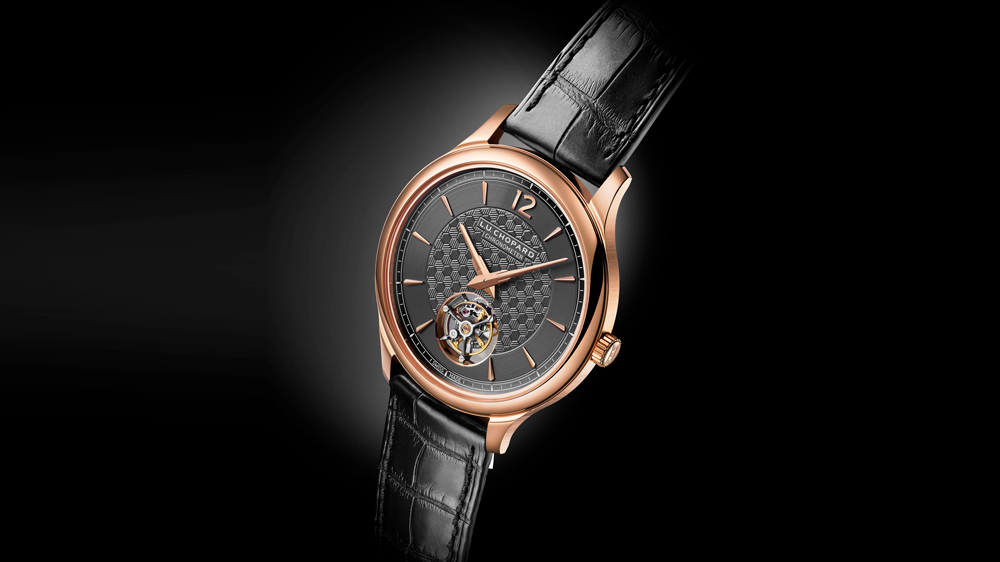 The jeweller has committed to only using Fairmined gold in the last year.

With its elite movement, a high-complication, a métiers finish, ultra-thin engineering and a COSC certification, the Chopard L.U.C Flying T Twin would have been an overachiever when it comes to the criteria for fine watchmaking. But to top it off, its case is made of Fairmined gold, which carries a guarantee that it has been ethically sourced and mined according to safe environmental regulations.

The Flying T Twin is Chopard’s first in-house flying tourbillon (although not its first tourbillon). The movement, L.U.C 96.24-L, is based on the L.U.C 96.01-L, Chopard’s first in-house calibre, an ultra-thin automatic, which is the same thickness, 3.30mm, but without the tourbillon escapement. Chopard keeps it slim by using a recessed micro-rotor instead of a large central rotor that would add an extra layer to the movement, and by eliminating the upper bridge on the tourbillon. The result is a cased tourbillon wristwatch that is only 7.2mm thick and 40mm wide. (Bulgari holds the record for the world’s thinnest automatic tourbillon, with a 1.95mm-thick movement and a 3.95mm case, a thinness created by combining the main plate and dial plate, thus eliminating an entire layer).

The decoration clinches Chopard’s definition of this piece as the ultimate “gentleman’s wristwatch.” The Flying T Twin (around $170,000, limited to 50) is made to Geneva Seal standards, meaning every inch of it—inside and out—is decorated or hand-finished. The dial is solid gold, which, unlike brass, is soft and easy to engrave, and here it is guilloched into a honeycomb pattern on the inner dial. The beehive motif carries special symbolism for Chopard, alluding to the first logo used by company founder Louis-Ulysse Chopard on the L.U.C XPS 1860 Officer edition.

The outer dial that surrounds it is decorated with a snailed finish, onto which gold markers are applied, and the full dial is galvanized with a grey ruthenium finish. The case sides and inner horns are vertically brushed, contrasting with the high-polish on the tops of the lugs and the bezel. On the caseback, the bridges of the movement are decorated in a traditional Côtes de Genève pattern and the 22-karat gold micro-rotor is engraved with deep grooves that fan out from the screw. Everything else is chamfered, polished and perlaged to perfection.

The “Twin” in the title refers to the movement’s two mainspring barrels, which are stacked vertically and coupled together for a power reserve of 65 hours—more than enough to last a weekend. There is also a hacking seconds feature, which is rare in a tourbillon, so you can zero the seconds hand for accurate setting. Seconds are tracked on the carriage of the one-minute tourbillon, indicated by a small arrow.

The case is made of 18-karat Fairmined rose gold, sourced by Chopard directly from artisanal mining cooperatives that adhere to a list of environmental, safety and ethical employment standards. Chopard is the main purchaser of Fairmined gold, which it had reserved for the production of its complicated watches and some of its high jewellery models (H. Moser & Cie is the only other watch brand that has made efforts to use ethical gold in some of its watches), and it pays a premium for it—refining its own gold on site. But as of a year ago, Chopard announced that it is now 100 per cent committed to using Fairmined gold in all of its collections. That puts the brand, in the watchmaking world at least, ahead of the pack.