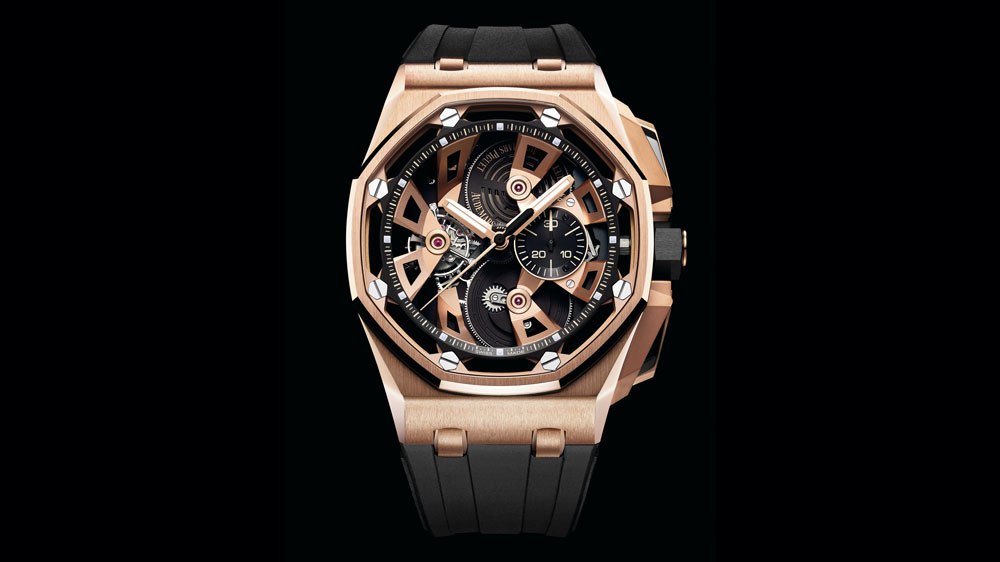 The two new timepieces, in stainless steel and 18-karat pink gold, are limited to just 50 pieces each.

To celebrate the 25th anniversary of its Royal Oak Offshore timepiece, Audemars Piguet released a re-edition of the original model (around $37,000), which has already begun delivering to stores, as well as two new Royal Oak Offshore Tourbillon Chronographs, which have just been released at retail.

Audemars Piguet’s Royal Oak Offshore was first launched in 1993 but was considered bold and brash for its heft and size. Nonetheless, it would go on to spawn over 120 references in stainless steel, titanium, gold, and platinum. Going big paid off and arguably launched the bigger-is-better era in watchmaking. And while the pendulum is swinging back to smaller timepieces now, the Royal Oak Offshore remains one of Audemars Piguet’s biggest sellers (alongside the Royal Oak) and its latest iterations feature a striking new design.

Its latest two 45 mm versions, in 18-karat pink gold (319,300 CHF or $441,600 at current exchange) and stainless steel (283,250 CHF or $391,800 at current exchange) are limited to just 50 pieces each. The two new models are inspired by the previous Royal Oak Offshore Tourbillon Chronographs (references 26388PO and 26288OR), but this time around they feature an entirely new movement—the in-house, hand-wound caliber 2947. The movement is an open-worked version of the caliber 2933 found in the 26388PO and 26288OR versions. The movement features 338 components with an integrated chronograph movement and column wheel mechanism and has an incredible 173 hours of power reserve.

The dial exposes the elaborate architecture of the movement and features the tourbillon at 9 o’clock and the 30-minute counter for the chronograph at 3 o’clock. The skeletonised bridges appear to fan out from the centre for a completely unique new dial that works with the movement to build the aesthetic. To top it off the crown and push pieces are now crafted in ceramic instead of metal and rubber.

In a year in which watchmakers have been playing it safe or going retro, Audemars Piguet has unapologetically dialed it up a notch for its anniversary. Those clientele who aren’t particularly impressed by vintage or vintage-inspired should be clamouring for it.