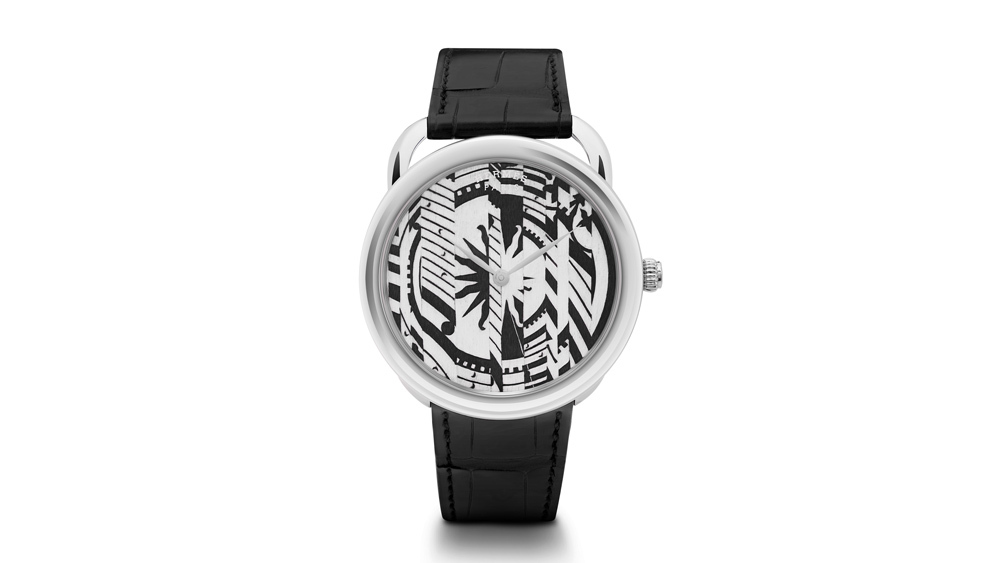 You can now find the motifs of the Astrologie Nouvelle scarf on a limited edition Arceau timepiece.

Few luxury items have had as much longevity as a silk scarf by Hermès. High-end watchmaking fans may, of course, beg to differ. But now, they no longer have to choose.

Hermès has just released an Arceau timepiece whose dial features the alluring mix of astrology and horology motifs seen on the brand’s sought-after Astrologie Nouvelle silk scarf. And it’s a beauty. Created in 1963 by Françoise Faconnet and reinterpreted for autumn/winter 2012 by Cyrille Diatkine, the pattern reflects an artistic view of the flow and acceleration of time; Diatkine described it as “orderly chaos.”

The most striking aspect of the watch is the way Hermès artisans have rendered the design: using the specialized and meticulous technique of wood marquetry. The 41mm white gold case frames a dial set with tulipwood, a tree native to North America known for its fine and firm grain, as well as a colour that evolves from white to dark blue.

Each dial requires three weeks of painstaking work that begins by cutting tiny pieces of tulipwood before assembling them, puzzle-like, onto the dial; sanding; and varnishing.

Available in a limited edition of eight pieces, each priced at $54,900 (around A$81,000), the self-winding model comes on a matte black alligator strap

Although marquetry is an esoteric craft, it is not unusual to see it used in high-end watchmaking. Cartier, Piaget, Vacheron Constantin and Patek Philippe are just a handful of the prestige brands that have incorporated the technique into their repertoires, using materials such as wood, mother-of-pearl, even straw.

For Hermès, however, the Arceau Astrologie Nouvelle timepiece marks the first time the maison has worked with the ancient craft.

“Over the years, we have had the opportunity to meet talented craftswomen and craftsmen to express the creativity of the house,” says Philippe Delhotal, creative director of Hermès Horloger. “Techniques such as enamel and engraving are commonly used, but crystal, leather, straw and wood marquetry are rarely applied on a small scale. This occasion marks the first time we’ve used wood marquetry, where each element is meticulously cut, handled and assembled on the dial.”