The French brought the glamour and celebs – alongside the further elevation of tailored suiting.

With Milan Men’s Fashion Week firmly in the rearview mirror, the smart set stacked with their smartphones swiftly jumped to Paris for a slew of A/W men’s moments.

Houses echoed many of the design sentiments seen In Italy – with elegance at the fore and suiting no longer a dirty word. 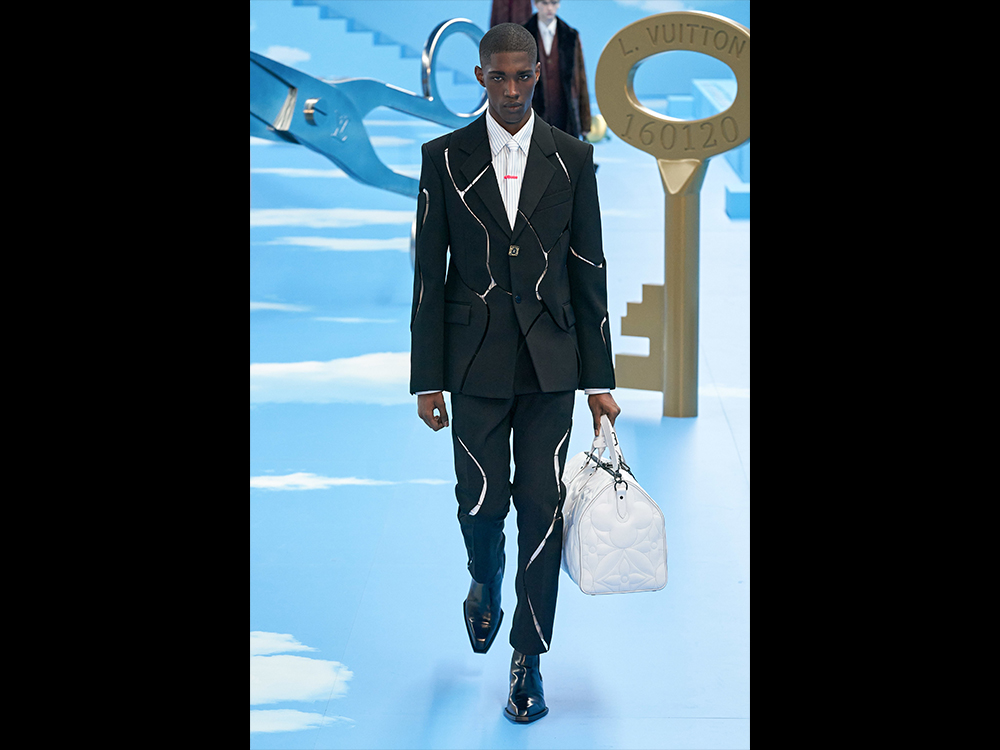 Virgil Abloh’s streetwear roots are being challenged in his tenure at Louis Vuitton, the designer continuing to redefine himself and his impact on the French maison. This outing featured tonal leather suiting and sharp-cut workwear as a welcome priority. We’ll also opt for some new – and rather fierce – Chelsea boots. 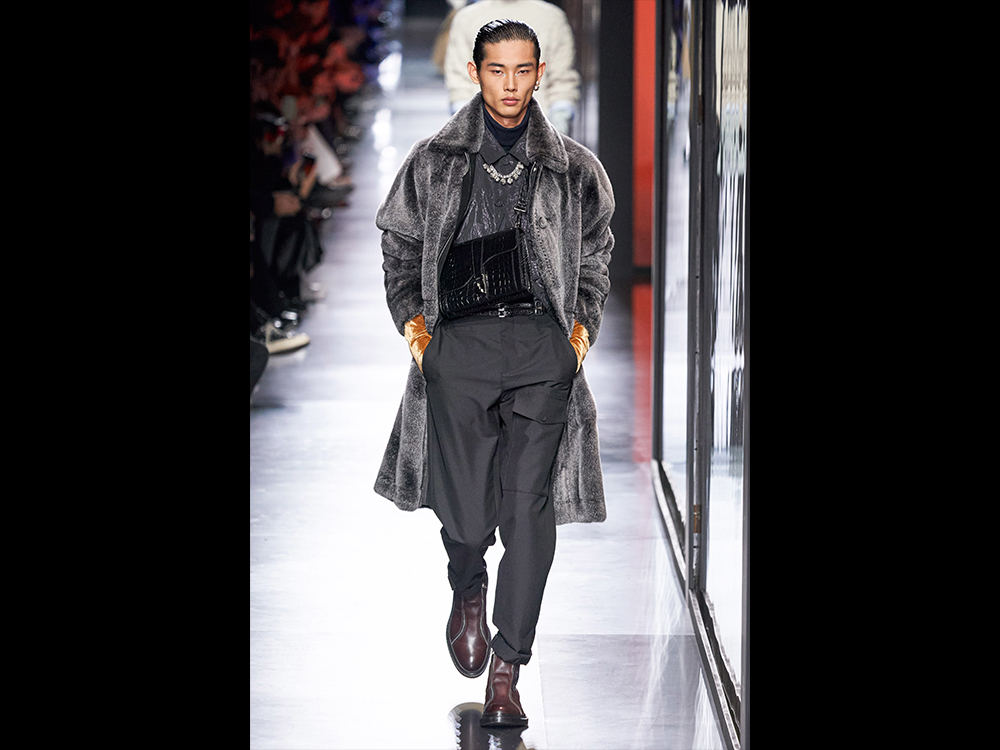 In a show dedicated to Kim Jones’ late friend, occasional collaborator and ‘DIY-style’ jewellery designer, Judy Blame, the Dior runway boasted some of Blame’s personal style – think elbow-length velvet gloves and elevated sleeves. Elsewhere, it was a welcome update of the ‘50s – a heady style period for men – and it worked, Jones delivering another standout season that continues to move the house away from where it became moored for too long – hi, Kris Van Assche.

As for the front row – Dior was the place to be, no one able to match the likes of David, Victoria and Brooklyn Beckham, Robert Pattinson, Cara Delevingne, Bella Hadid, Luka Sabbat, Diplo, Douglas Booth and Noomi Rapace, among many others. 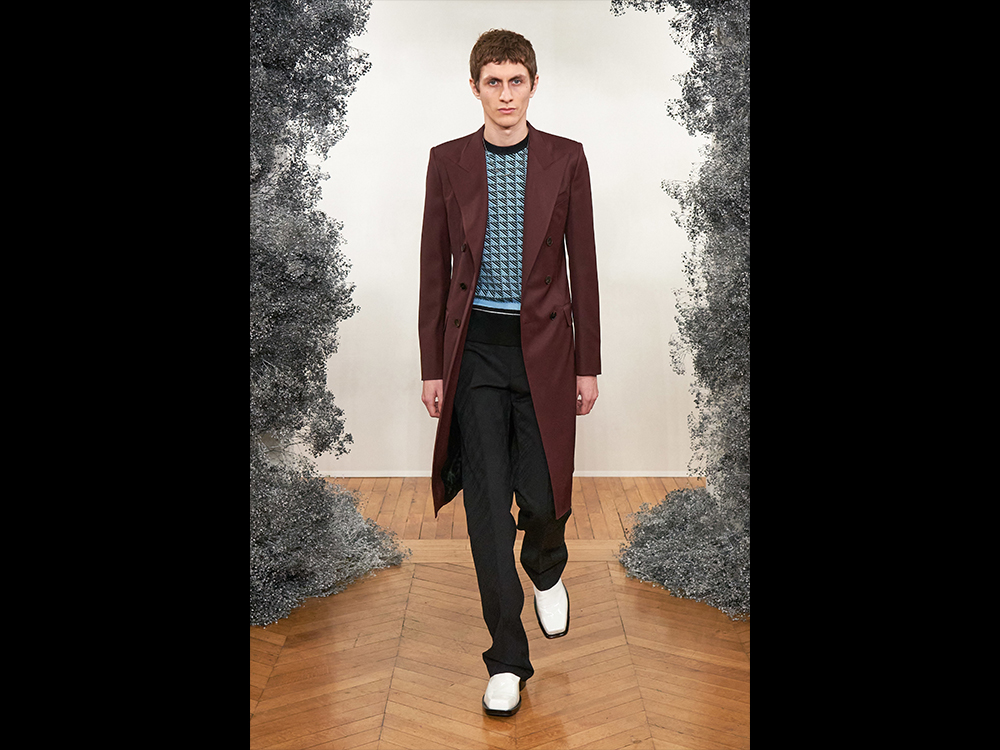 Clare Waight Keller’s show for Givenchy saw a return to elegant, sleek and focussed design. Classic silhouettes formalised Keller’s expression of man, while macho, square-toed cowboy-inspired boots walked alongside peak lapel overcoats,  such as this maroon number we’re partial to. Urban modern dandy meets McQueen – and nothing wrong with that. 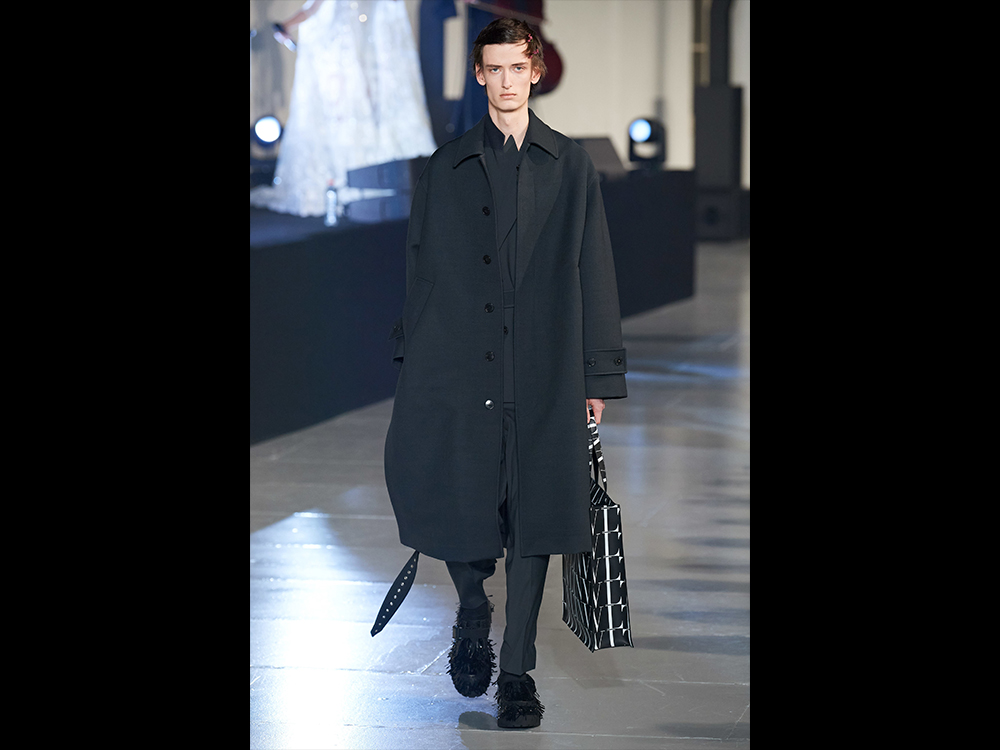 Sensible and sensitive are two words that come to mind. Florals adorned trench coats as well as some slick tailoring. Of the alluring set of accessories, surely it’s all about this tote? 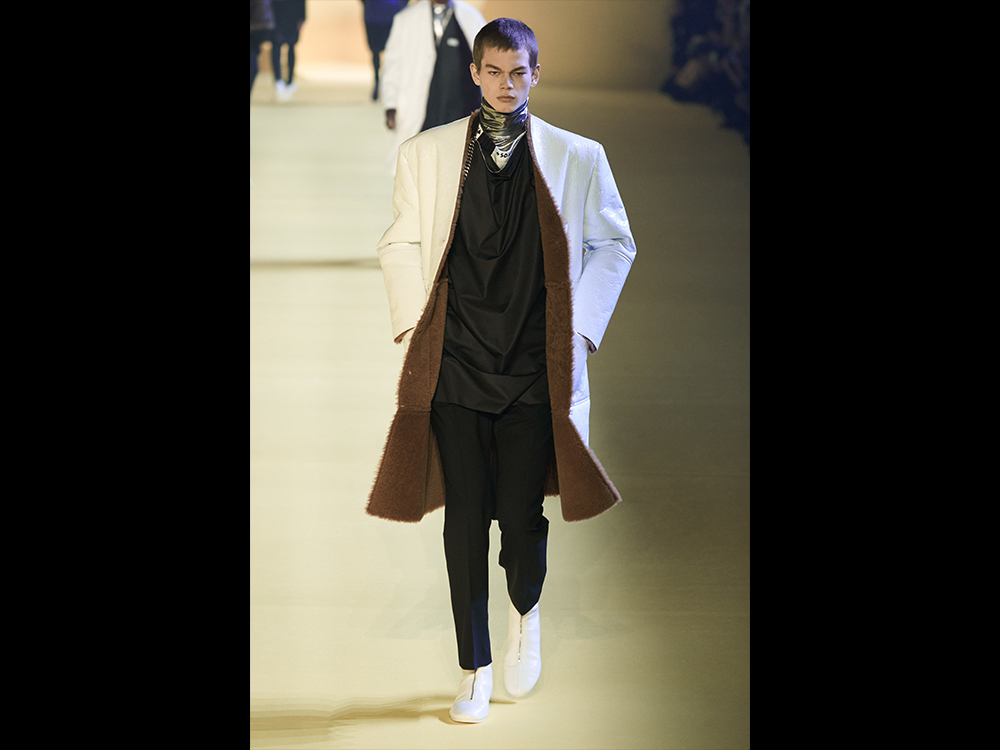 Simons, casting renewed focus over his eponymous label, has pulled together a militarised, futuristic and elegant collection of … overcoats. The standouts of which are loud, luxurious faux fur lined numbers, shirking the boyish cuts of years prior and flexing his ability to refine things. 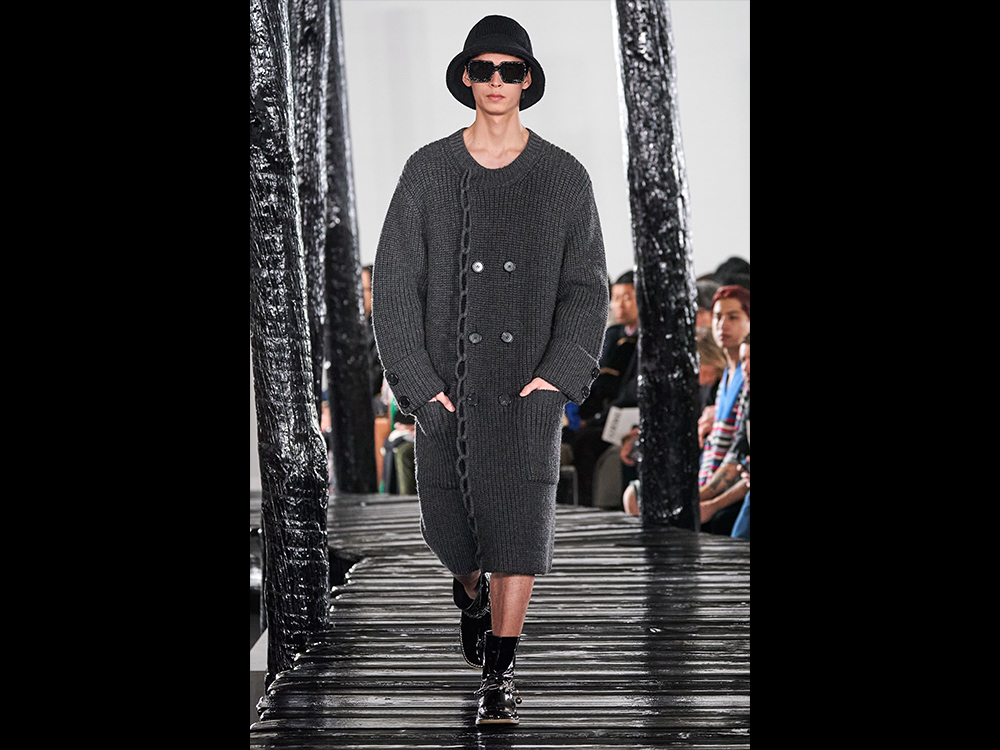 We’re fans of Jonathan Anderson – though we’re not likely to sport too much from his latest for the Spanish label. Days out from the Parisian couture shows and the Irish designer delivered a collection of women’s couture shapes deconstructed and refitted for men. Playful? Absolutely. Accessible? Not so much. Thankfully there’s also his JW Anderson label – from which we found more genuine engagement across prints, flowing knitwear and hefty coats. 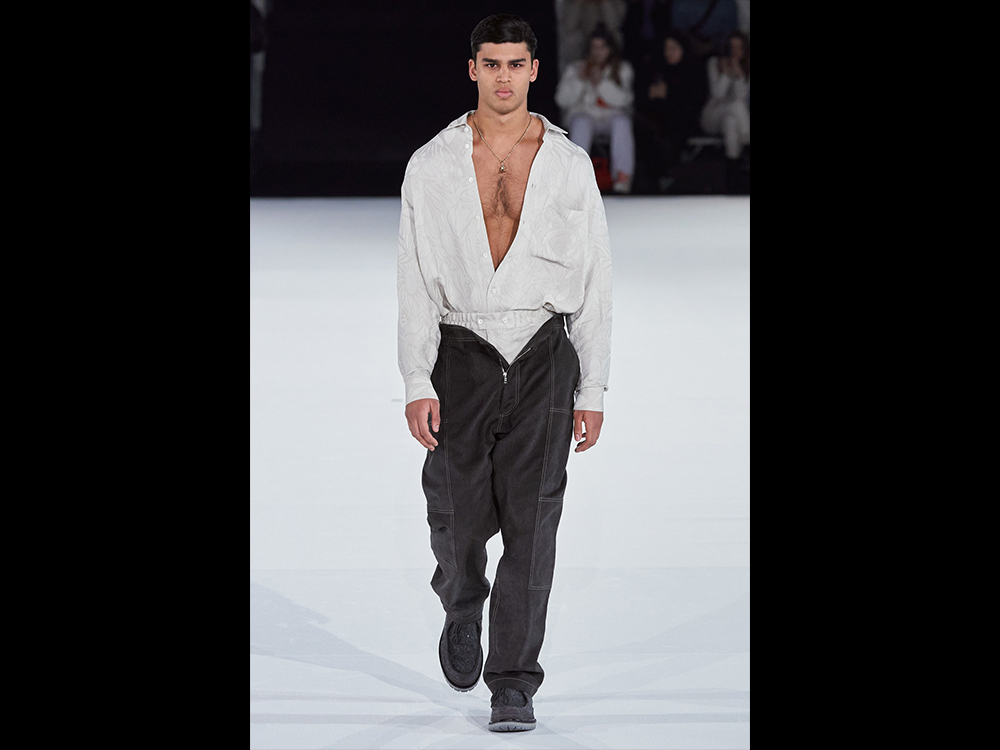 Another RR fave – Jacquemus delivering a strong co-ed showing that for men meant another flowing set of designs, layered and pared back in regards to colour and what he’s previously sent down. On our list – this floral printed shirt to flaunt the chest (if you’ve got it, why not?) 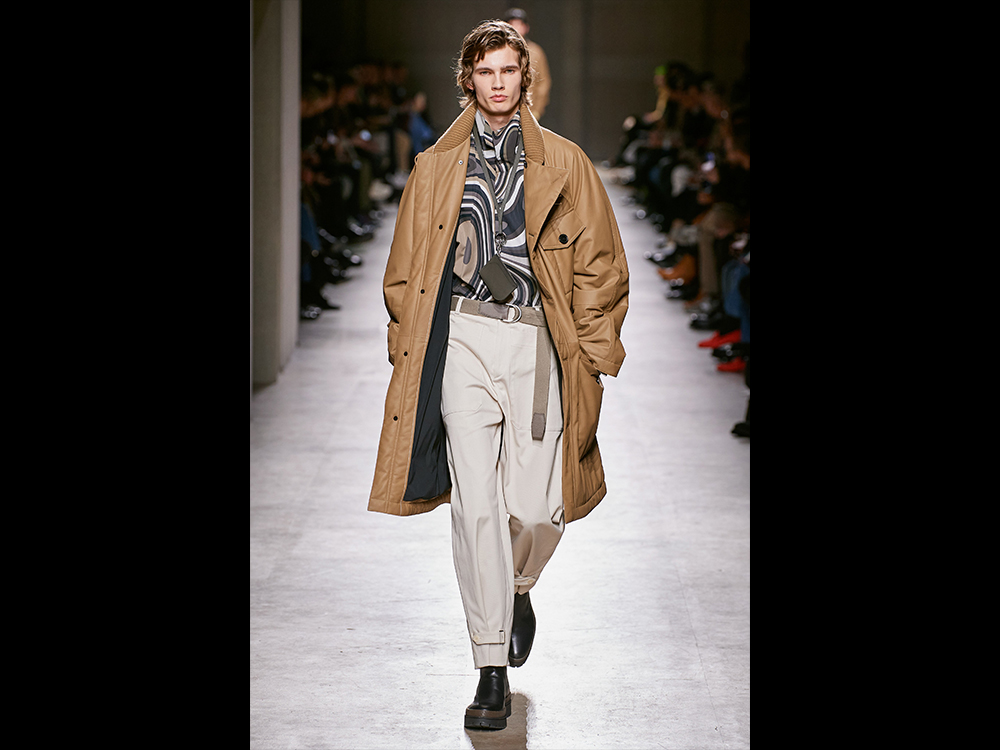 The French maison has such a strong sense of self, steered effortlessly by Véronique Nichanian and what was another strong collection that gently progressed things, without veering too far from elegant, tailored pieces and a wonderful use of signature house leather and standout autumnal tones of tan. 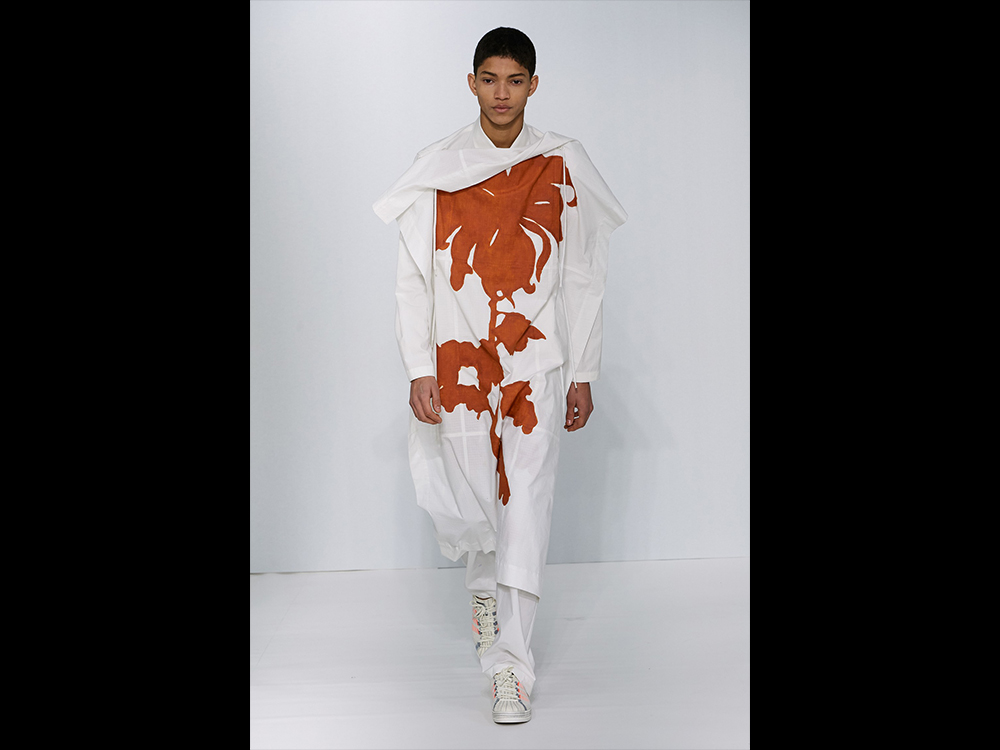 Green’s first Parisian showing pointed to two themes – the ‘packaged human’, and the idea of ‘emotional baggage made physical’. WTF? Sure, it’s out there though then there are few people pushing like Green – this collection another exploration of masculinity as delivered via protective armour, tubular shapes and a unique use of cloth. Despite the moodiness, this floral print cut through.