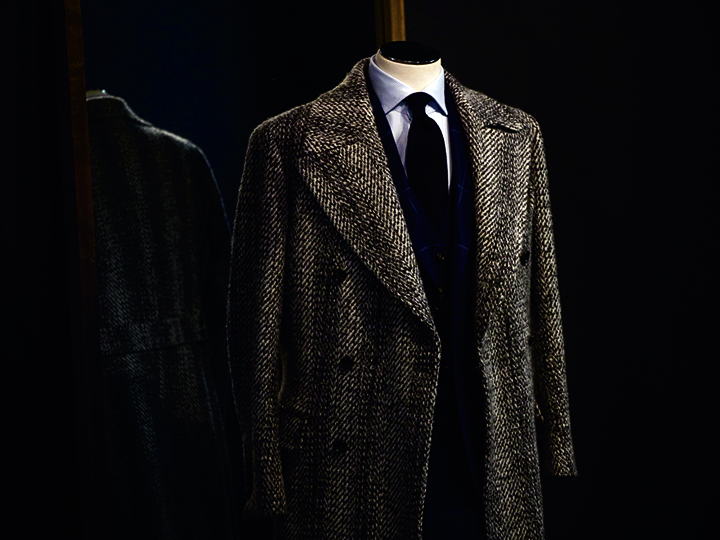 The winter coat maketh a man of style

The right outerwear can make all the difference between shivering or striding through our chilliest season.

The plain and simple purpose of a winter coat is to keep you warm, but the discerning gentleman knows it’s about so much more. A well-cut car coat identifies one who’s done well for himself, a waterproof windbreaker or parka signifies a sailor or similar outdoors type, and a classic trench coat singles out its wearer as a connoisseur of form and function. In short, the winter coat maketh a man of style.

Winter affords the opportunity to embrace more substantial outerwear in our more typically sun-stricken Australian climate. Amid the leaden skies, wild winds and unremitting downpours of June, we’re putting our focus on winter coats and jackets.

Two British companies, Burberry and Aquascutum, both lay claim to having invented the trench coat. Beyond dispute is that the garment acquired its name because it was worn by officers fighting in the trenches in World War I. Today it’s corporate warriors who don the classic dun-coloured topper (which now also comes in myriad other colours and neutrals) for their daily commute, as it is the easiest way to look sharp and stay dry, whatever the elements may throw at you.

“When styling for the office, it’s important the trench is not too fitted in its shape, and can be worn comfortably over a suit jacket,” says Harrolds menswear buyer Robert Ferris. “Think style icon Humphrey Bogart; the way he wore a trench is timeless.” Tom Ford and Pal Zileri both do trenches with cuts well suited to the office, but when wearing a trench more casually, a fitted shape is better.
“You can dress a trench down with jeans or chinos worn with sneakers, and a trench is great to throw on over a shirt, T-shirt or knit,” says Ferris.

Moncler is your go-to for a sportier look, and Thom Browne for a fresh take on the classic. More fashion-forward men can really play with shapes and looks in this contemporary category, and oversized trenches are currently a key look for both men and women thanks to brands like Vetements and Balenciaga.

If the trench is a rainy day hero, the single-breasted jacket exists as a winter wardrobe staple.

“Being easy-wearing and versatile, it forms the basis of most men’s formal wardrobe,” says The Cloakroom founder Andrew Byrne.

But while there is a tendency to cut jackets very slim with skinny lapels, this style isn’t overly flattering for most men.

“A single-breasted jacket should be cut to be comfortable, but also shapely, and with a generous lapel to add some volume to the chest area,” advises Byrne, who adds: “You can’t go wrong with a two-button, notch lapel configuration.” Comme des Garcons and the aforementioned Mr Ford do single-breasted jackets for contemporary cool and classic appeal respectively, but Crane Brothers tailoring founder Murray Crane also suggests borrowing a jacket straight from the English country squire’s closet. “The classic English tweed country jacket works perfectly for the Australian lifestyle, because it is a little more casual but it is still tailored,” says Crane. “It’s a great alternative to a puffer vest or a Kathmandu or Macpac outerwear jacket for men who don’t like to dress up too much.”
To avoid looking like you walked straight off a pheasant shoot, be sure to wear it as an odd jacket (ie, not a matching suit) with dark-grey or black trousers, and perhaps a single-strap monk shoe or a loafer.

Coats are often more expensive than jackets, so one should look to buy an investment piece that will do double duty. “The trick is selecting a coat that works in both formal and casual contexts,” says Byrne. “It should work with suits just as well as it does with jeans and knitwear. The colour shouldn’t be too dark, and unlike a suit jacket, a great winter coat should have something of interest in the detailing and design – be it epaulettes, patch pockets, a shoulder flap or a belt.”

When it comes to winter dressing, outerwear is the area in which you can really experiment with technical finishes, high-performance fabrics and purpose-engineered cuts. And where outerwear was once restricted to the Mackintosh and the parka, these days the (rainy) sky is truly the limit, thanks to brands including Dries Van Noten, Moncler and Belstaff embracing new forms of technical outerwear in their collections.
“In terms of layering, guys are slightly drifting away from bombers and parkas in favour of field jackets, windbreakers and Harrington jackets,” says Ferris. “A good layering tip to keep warm is to wear a light down vest under your selected piece of outerwear.”

That’s a good reminder of our introductory point: the key purpose of winter outerwear is to stay cosy.