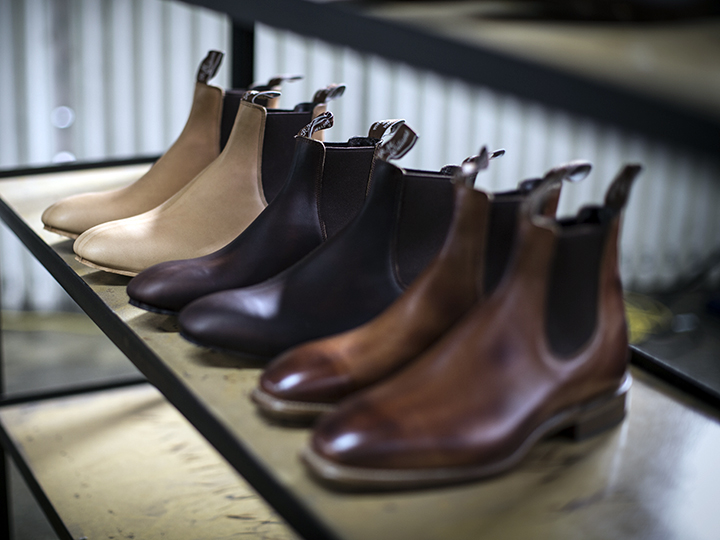 Adelaide institution R.M. Williams has expanded its appeal beyond the bush, but still offers a master’s touch.

Michael Williams was just 16 years old when he joined the R.M. Williams company straight from school as an apprentice bootmaker. “A mate of mine who’d left school a month earlier got a job there and he rang me and said ‘R.M.s is putting people on, are you interested?’” Williams was interested.

“I started with a four-year apprenticeship; partly at a trade school in Adelaide where we’d learn pattern cutting, drawing and how to use some of the machinery, but most of the apprenticeship training was hands-on in the factory, which I enjoyed the most.” After 41 years in the Adelaide factory that he joined in 1976, Williams (above) is now the master craftsman and head of the workshop that produces around 160,000 pairs of boots a year for customers from around the globe. These have included Bill Clinton, the Duke and Duchess of Cambridge, Daniel Craig, Joel Edgerton and Nicole Kidman.

Business has grown significantly since Reginald Murray Williams (1908-2003) handcrafted his first pair of boots under the guidance of stockman Michael Smith, better known as Dollar Mick, at Italowie Gorge in the northern Flinders Ranges. After moving to Adelaide, he founded a company in 1932 to make footwear suited to the harsh conditions of the Australian bush. To this day, each boot is crafted with a minimum of 80 hand-held processes that ultimately transform a single piece of meticulously softened and shaped hide into one of the world’s most recognisable footwear styles. “We start off with one piece of leather that is then blocked under extreme heat into the shape of a foot,” says Williams. “That blocking is so important for how a boot will fit you, because there are no laces to tighten so it’s crucial to get it right.”

While it’s the one-piece leather construction that sets R.M. Williams boots apart, Goodyear welting – the strip of leather that runs along the perimeter of the boot’s outsole – is also crucial to creating a durable boot that will last for decades.

“Most of our production is Goodyear Welt where the sole is sewed on, but some of our soles are screwed on with machines originally made in 1910,” says Williams. The resultant elastic-sided boots are sturdy enough to stand up to the rigours of the outback, but stylish enough to be worn by city slickers. The trek to international city centres began in earnest with R.M. Williams’ new strategy of “targeting the townies” following its acquisition in 2013 by L Capital, a private-equity firm backed by luxury goods company LVMH Group. “We cater for the man on the land with harder-wearing styles and treaded rubber soles, but we also cater for the city person with the Comfort Craftsman and the Adelaide boot, which has become very popular with the ladies,” says Williams. The ultimate boots for town or country are the Signature Craftsman and the Bespoke styles, both of which Williams personally signs off before they are permitted to leave the factory. The Signature Craftsman is made from the finest French veal calf leather, with super-fine stitching around the elastic and back seam, and three coats of lacquer to the sole, which is affixed with a brass plaque. Each boot is personally signed by the hands that made them, as are those in the Bespoke offering, which allows customers to choose their own style, leather, colour, thread and elastic, then have a personal message of up to 14 characters inscribed on the sole of each boot.

“We’ve had people have their wedding date, the name of their horse, their dog, their kids; you can choose pretty much anything you want, but you can’t have swear words,” laughs Williams.

Whichever boot you buy, the R.M. Williams repairs department is on hand to fix it, from something as basic as replacing heel rubber, or as complicated as undertaking a full re-last, which involves removing everything from the boot except the upper, then rebuilding it again from scratch. “When someone has had their boot for 10-15 years and they love what the leather has turned into, they really don’t want to give that up,” says Williams. “A lot of the boots we get in are passed down from generation to generation. We do 23,000 repairs each year that come in from Australia and the rest of the world.” Williams is equally proud of the fact that many others among the company’s 300 workers have been with R.M. Williams for decades, but he is no less focused on nurturing a new generation of younger artisans whose mission will be to ensure its future.

“It’s really pleasing to get young people into the plant that are 16 or 17 years old, then get them trained up and see what these kids are able to do six or 12 months down the track.”

So says the master craftsman who walked that same walk, 41 years ago.