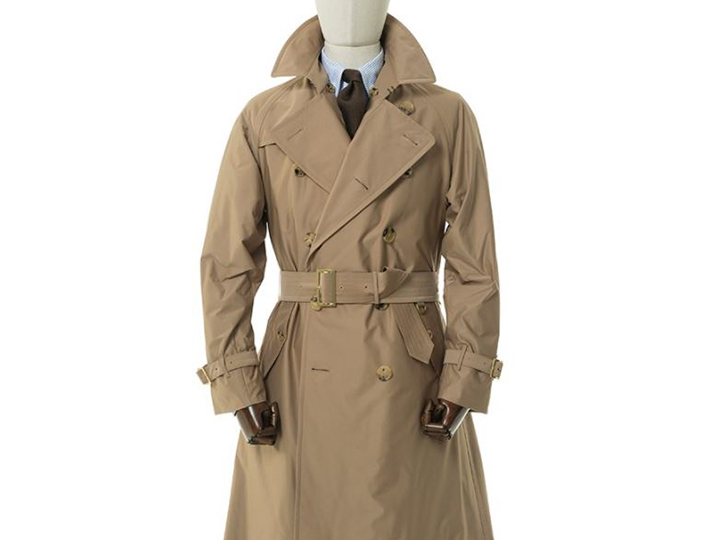 From Albert Camus’s trademark trench to the Scotch whisky of sweaters, the following selections will be wardrobe staples through the seasons to come.

Artisanship, timeless style, and passion: These are the foundation blocks upon which The Armoury was built. The menswear store, which opened in Hong Kong 6 years ago and recently debuted in New York City, has quickly garnered a devoted following, with over 55,000 Instagram followers and counting. The brand's success is due in part to its cofounder Mark Cho — the 33-year-old entrepreneur has a classic take on menswear and a keen eye for thoughtfully crafted merchandise. Cho, who also co-owns London-based menswear brand Drake's, recently shared with _Robb Report_ the 10 menswear pieces that transition seamlessly in different seasons.

From Albert Camus's trademark trench to the Scottish whisky of sweaters, the following selections are bound to be wardrobe staples through the seasons and for years to come. (thearmoury.com)

"This particular coat (top) was worn by Albert Camus," Mark Cho explains about Coherence's "Al" trench, $US1750 (about $A2370). "What's special about this coat is this is actually, in my opinion, the best trench coat on the market — period.

It's super, super accurate. You can even see the D rings on the belt. That would have been for hanging ammunition and grenades." The Armoury also sells a silk-fur lining, $US500 (about $A675) with which the waterproof trench can be lined for the wintertime. (thearmoury.com) "These are classic Neapolitan trousers," says Cho of Ambrosi's brushed-cotton single-pleat trousers, $US800 (about $A1080). "All the details are by hand — the buttonholes, the tracking details, where the seams end."

The style, by the second-generation trouser maker, features a silhouette with a high waistband that goes across to the hip bone in the true, traditional Neapolitan manner. "It's something that looks a little less fuddy-duddy than a corduroy but has a really nice warm and homely feel to it… It's really a beautiful, beautiful pant." (thearmoury.com) The A-1 wool jacket by Ring Jacket, $US715 (about $A965), is one of the Armoury's best-selling pieces. "It was one of the first products we ever sold," says Cho. The made-in-Japan jacket — great for layering in the winter — is based on the styles worn by American military pilots in the 1920s and '30s.

"It's an old type of bomber jacket. It's cut a little bit on the short side, ending] on the hip bone, and it's a little bit fuller, so it sits great with full-leg trousers or even narrow jeans," he explains. "It's a lovely piece." ([thearmoury.com) Another exceptional offering by the decades-old Japanese clothier is the Ring Jacket baby-camel hair sport coat, $US1600 (about $A2165). "This one is awesome. It's my favourite [piece]. I've been meaning to grab one off the shelf before it's too late," says Cho.

Exclusive to the Armoury, the blazer was tweaked by Cho and his team to have wider shoulders, lower buttons, and lapel notches, for a more old-school look. "This one I love because it is baby-camel hair, which is a little bit softer than typical mature camel hair and you can get it in a much, much paler colour — a vibrant cream with a little bit of a sheen to it." (thearmoury.com) The store offers its own line of house-label knitwear, and among the notable offerings is the Armoury's cashmere basket-weave crewneck sweater, $US750 (about $A1015). "We try to do stuff that you can't really find that easily in the market right now," says Cho.

This particular style is a heavyweight knit, which, to most, is unexpected for cashmere. "Usually when you do cashmere knits, people like it in quite fine yarns. We actually used a really heavy yarn for this instead." The garment was crafted at a mill in Scotland, a decision based on one element: water.

"Something a lot of people don't realise is that where your knitwear is made can make a difference because of the water. Knitwear is actually washed as it's made, and something about Scottish water — the same reasons that, for instance, Scottish whiskies are so great — can actually make heavyweight cashmere feel that little bit denser, with more of a body to the fabric, but more luxurious at the same time." (thearmoury.com) Another distinguished house-label knitwear offering is the Armoury's merino-wool sleeveless cardigan, $US250 (about $A340). While at first glance the piece is fairly basic, the waistcoat is actually thoughtfully conceived to bridge the gap between comfort and a chic, put-together look.

"We have a lot of guys who like the idea of a three-piece suit but the waistcoat might be impractical or a little bit too fancy," says Cho. "We made a waistcoat that's very fine. We used a 21 micron] merino wool, which is quite a fine gauge, but it's not paper thin — it still has some body." For the perfect layered look, he suggests styling the waistcoat under a suit with higher-rise trousers. ([thearmoury.com) Cho, who is a co-owner of the British retailer Drake's, also recommends a classic English dress shirt for the fall-to-winter wardrobe. One particular example is Drake's cotton check spread-collar shirt, $US215 (about $A290), which is handcrafted in Somerset in South West England.

"This is like the classic English dress shirt but we've updated a lot of the detail," Cho explains. "Something that actually sets apart classic English shirts from, say, Italian shirts, is the way they do the collar. When we build the collar, there's usually a little bit of what we call an 'interlining' in between the shirt and the cuff]. The collar has a little bit of stiffness to it. Drake's stripped out a lot of the interlining but kept just enough in the collar points. We actually have a triangular piece of interlining that gives the collar a neatness, but it's still super comfortable." ([thearmoury.com) The Armoury's camel hair shawl-collar cardigan, $US650 (about $A880), channels the style of on-screen legend Steve McQueen. "I love it because it's actually true to the original design McQueen used to wear," says Cho.

The sizing of the four-ply knitwear lends it to be the perfect, versatile jacket. "You could wear it casually with a pair of jeans, but actually, I think it could be really cool slightly more dressed up at a social event with a pair of trousers and a button-up shirt — maybe even a tie." (thearmoury.com) The Japanese label Tabio produces exceptional socks in such luxe fabrics as silk, cashmere, and mohair. Now, the nearly 50-year-old brand's offerings are exclusively available through the Armoury, a sweet success for Cho personally.

"I'm so excited to have these in the store now because I have been wearing [Tabio socks] since high school," he says. "Since the Armoury opened, I've been chasing them, trying to get them into the store."

The Tabio socks, $US36 (about $A49), Cho recommends are the long silk-and-cotton styles that go up to just under the knee and never droop, much like vintage styles. The Armoury offers the socks in eight hues, including burgundy, charcoal, navy, and olive. (thearmoury.com) Another personal project of Cho's is the Andrea's x the Armoury cashmere-and-silk Three Kingdoms scarf, $US550 (about $A745). The exclusive piece is a result of a collaboration between the Armoury and Andrea's 1947, an old-fashioned textile manufacturer in Prato, Italy, that uses traditional shuttle looms.

The lightweight scarf, perfect for both autumn and winter, depicts the Three Kingdoms division of China's Wei, Shu, and Wu states. "The image is actually taken from an old art piece my dad had hanging in his office," says Cho. "It's quite a big six-panel screen. We photographed it — because it must be 200-odd years old — and touched up the colours to preserve the look but make it wearable as a piece." (thea rmoury.com)