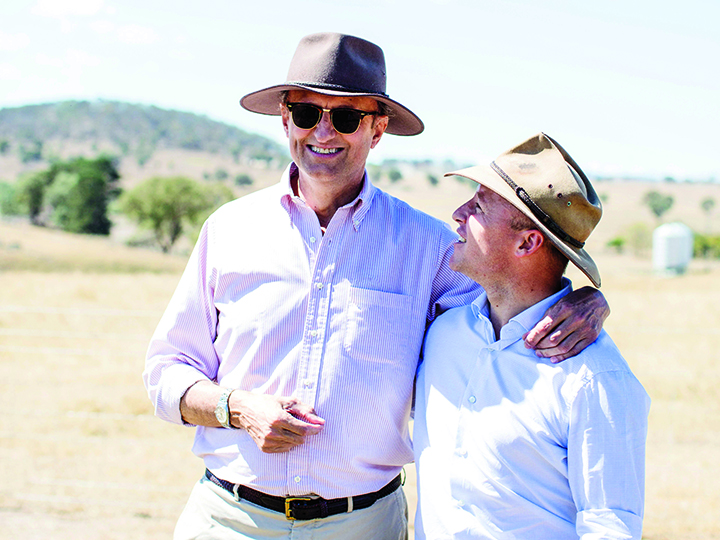 Quality and loyalty results in a ripping yarn

Australian growers are creating the ‘yarn of the future’ and leading the world in wool technology.

When Paolo Zegna hosted a lavish dinner in Melbourne recently, the chairman of the $1.7 billion Italian fashion empire Ermenegildo Zegna wore a black tie embroidered with a burgundy Australian Merino wool sheep. “The sheep is my second mama,” he said over fine wine, roast lamb and vegetables.

True to this sentiment, a day later Zegna was 1000 kilometres away from Melbourne, striding through gale-force winds and driving rain alongside a billabong on a 2500-hectare farm outside Armidale, NSW. Achill Farm was acquired by the Milan-based luxury brand in 2014 to improve and vertically integrate production. “We bought a wool farm in Australia to close the circle,” says Zegna.

You might think an Italian luxury fashion company and a fourth-generation Australian sheep farmer make for odd bedfellows, but the maintenance of historic ties and generational experience, with an eye firmly on the future, make them more similar than appearances suggest.
“We share the same passion, love of quality and constant quest for innovation,” says Zegna.

It’s almost impossible to teach the Italians about innovation in luxury – they practically invented it – but Achill sheep farmer Charles Coventry (pictured above) has managed to do just that through his constant search to enhance the quality of his fleeces.

“Charlie is someone who looks beyond the horizon to continually improve and achieve higher goals,” says Zegna. “I’ve learned a lot, from the technical point of view, from the way he uses genetics and statistics to better his breeding. It’s something he’s worked on for generations, so it’s really opened up my knowledge.” Coventry incorporates everything from DNA testing and electronic tagging of sheep to grassland trough systems and highly technical measuring and forecasting of pasture, to produce the best fleece possible on his family’s land.

“It’s hugely important for us to continue to challenge what we do and how we do things,” he says. “Incorporating new technologies and systems allows us to be more precise and calculated about the decisions we make.”

The reliance by global luxury brands such as Ermenegildo Zegna on Australian wool growers like Coventry is due in no small part to this highly targeted approach to ensuring the quality of their product.

“Australian wool is the best in the world,” says Zegna (below). “It has a combination of strength, colour, performance, resilience and softness that we don’t see in any other country.” The Melbourne dinner was to celebrate those attributes with the 54th annual Ermenegildo Zegna Wool Awards. With remarkable foresight, the Italian company established the award in 1963 as an incentive for Australian wool growers to further improve the quality of their product.

It is McCullough’s job to ensure that innovation in wool continues, from farms such as Achill, Tarrangower and Rowensville, through to the wool fabrics produced, and onto the world’s fashion runways. AWI invests in textile innovation – currently targeting the growing sports and performance markets – and allows fashion designers to choose from a range of innovative treatments that enable them to create unique textures and finishes on Merino garments.

“Wool has always tended to be known as a tailoring textile, but we are also positioning wool with the running and outdoors companies by investing in the technical end of the spectrum,” says McCullough. “We are determined to increase market share and lift demand for Australian wool, and the best way to do that is through product innovation and new marketing strategies.”

Among the recent innovations masterminded by the AWI are an award-winning collaboration with Adidas on a reflective wool knit sports jacket; a new wool denim fabric that is more breathable, soft and fade-resistant than traditional denim; and a fabric called Merino Perform that is wind-resistant, shower-resistant and wrinkle-free.

The pinnacle AWI initiative for promoting fashion innovation using wool is the International Woolmark Prize, a $100,000 award recognising fashion talents from around the globe who are showcasing the versatility and beauty of Merino wool.

Established in 1953 and won the following year by then-unknown designers Karl Lagerfeld and Yves Saint Laurent, the IWP celebrates emerging talents from more than 60 countries. At the 2017 awards, held in Paris in January, the womenswear category was won by New York-based Gabriela Hearst and the menswear prize snared by British label Cottweiler.

“The great part of this was the opportunity to work with a different material – Merino wool – because we’re always interested in experimenting with technology and development,” said Cottweiler’s Matthew Dainty upon winning the prize. Gabriela Hearst boldly declared wool “the yarn of the future”.