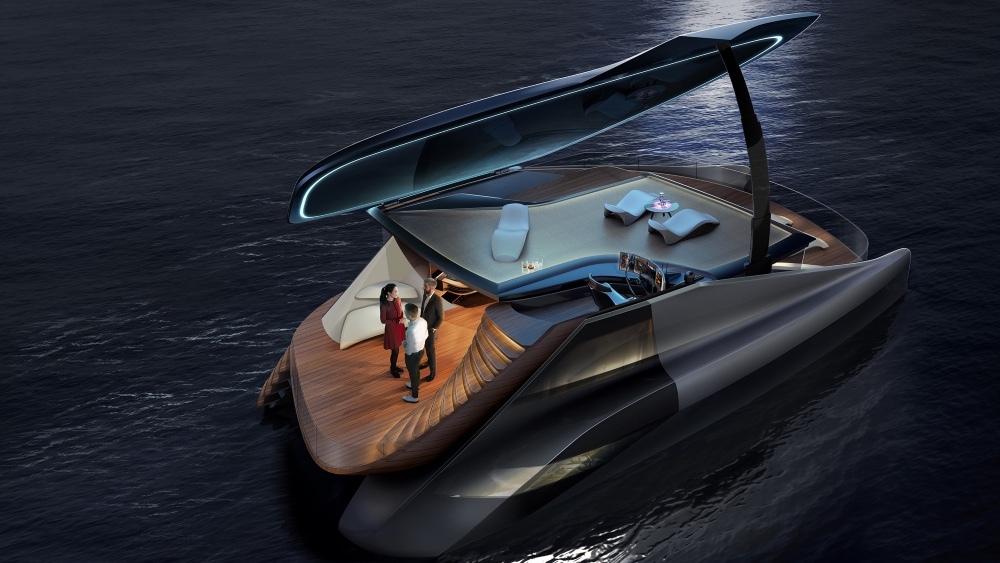 This New Electric Catamaran Looks Like A Giant Grand Piano

The Fibonacci electric catamaran was conceived by automotive designers who thought the yachting world was ready for a look into its future.

Icona Design Group describes the lines of the Fibonacci electric catamaran as “reminiscent of a piano.” Named after the medieval mathematician who discovered that geometries in nature are based on sequences of numbers, the 16.4-metres concept yacht marks the automotive design studio’s debut in the yachting world. It is also an evolution of the progressive thinking behind the award-winning Icona Nucleus, its autonomous concept vehicle.

“We wanted to apply once again a futuristic vision of transport, but this time on water,” said Samuel Chuffart, vice-president and global design director of Icona.  The company has offices in Los Angeles, Shanghai and Turin, home to Fiat and other Italian automotive manufacturers.

The Fibonacci electric concept follows from Icona’s automotive concepts. The designers said they wanted to provide a “futuristic vision of transport.” Icona

“Tomorrow’s boating experience will no longer be for just a few aficionados—with the technological evolution and sustainability now offered, boats should be designed differently to embrace a wider spectrum of people and uses,” said Chuffart.

Drawing on new technologies and disruptive design, Icona developed the Fibonacci together with Hydrotec, an Italian firm of naval architects; Terra Modena Mechatronic, a startup company that designs and produces electric propulsion systems for marine use; and ASG Power, a Swiss electrical contractor. The platform they have created can be adapted to different yacht designs with different uses.

The exterior breaks many rules of yacht design, but in a refreshing way. Icona

“Yachting is very self-referential, so what attracted us to this project was that it brought us into contact with specialists in other fields such as automotive design and electric transport,” Sergio Cutolo, founder of Hydro Tec, told Robb Report. “The catamaran configuration, propulsion system and overall concept is the result of a collective effort to maximize the efficiency of the design and minimise energy consumption.”

The comparison to a piano refers to the hardtop that lifts up like the lid of a grand piano to expose the fly deck. The parabolic main deck offers sweeping ocean views fore and aft through the open-space salon. Inside the hulls are two or, if the owner wants more, three en-suite guest cabins. The asymmetric staircases give it a dramatic look, while the catamaran design allows a small tender to be stowed between the two hulls in the stern.

Clearly, the Fibonacci catamaran is not a vessel for ocean crossings or even extended cruising. Instead, it was conceived as a day boat for fun on the water. It is squarely aimed at a new and younger generation of owners, rather than traditional yachties.

“It had to be dynamic, easy to use, sustainable, non-aggressive and welcoming, which are not typical features of conventional boats,” says Chuffart.  “I could see the Fibonacci as part of a fleet of yachts that you can rent for the weekend with friends or family.”