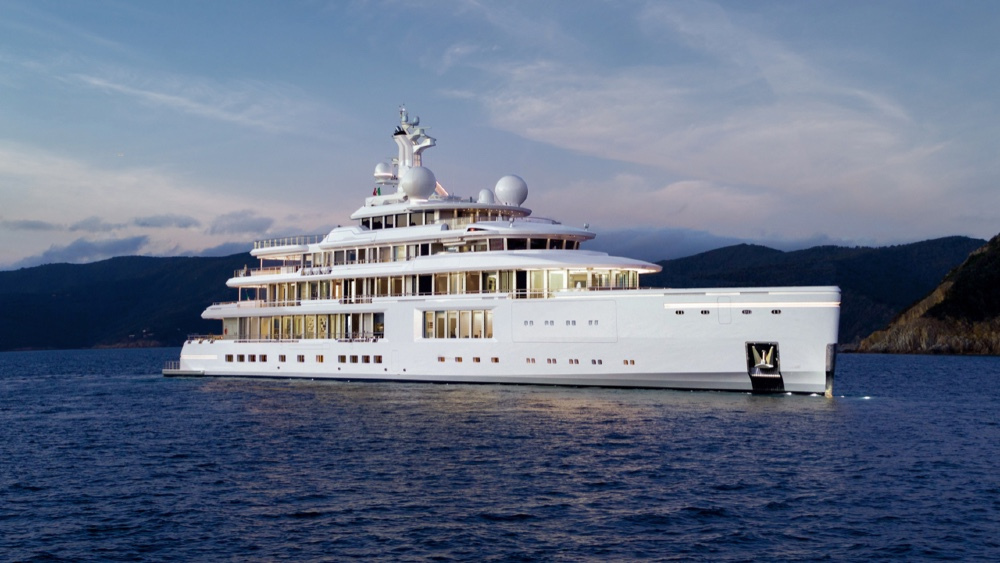 This 107-Metre Green Gigayacht Is Now Up For Sale

The Benetti “Luminosity” was listed just weeks before her scheduled delivery to her owner.

Opportunities like this come along once in a blue moon. Here’s a chance to buy a new, 107-metre Benetti-built superyacht without the usual five-year wait. All you need is $400 million.

Launched to huge fanfare at Benetti’s Livorno yard in Italy in February 2019, Luminosity is currently having the finishing touches made to her. She’ll be completed this summer. Luminosity is jointly listed with the brokerage firms Fraser and Burgess.

“This is truly a rare opportunity for a buyer to acquire an essentially brand-new yacht, without the lengthy build time, and all the planning and engineering time,” says Stuart Larsen of Fraser Yachts. “Plus, Luminosity comes with a two-year factory warranty.”

One of the greenest gigayachts built to date, the 107-metre vessel also has all the niceties one would expect, including this counter-flow swimming pool in the beach club. Fraser Yachts

No word as to why the owner is selling, though Larsen says it’s not unusual for an owner to put a new yacht on the market so soon after launch.

Designed to be one of the “greenest” superyachts on the ocean, the big-windowed Benetti features advanced diesel-electric hybrid power. Its high-tech battery technology includes 32tonnes of lithium polymer batteries that provide juice for up to 12 silent hours at anchor with zero emissions and no generator noise.

The yacht’s groundbreaking interior, with almost 836sqm of floor-to-ceiling windows on four levels, takes “going green” literally. A five-story glass stairwell creates a virtual forest where you can watch “e-flowers” open and close as they detect motion in the dining room.

Within the yacht’s 107-metre length and 17-metre beam is a staggering volume of 5844GT. Built to the Passenger Yacht Code, she can accommodate 26 guests in 12 suites, including a huge dedicated owner’s deck with large terrace, floor-to-ceiling windows and an elevator that services every deck level.

The yacht has 31 tonnes of lithium-ion batteries that will power the house systems with zero emissions for 12 hours. Fraser Yachts

“Luminosity is all about innovation. In response to increased public awareness, Benetti has invested time and resources into green solutions. The engine room is just one impressive example of the yacht’s efficiency and state-of-the-art engineering,” says Larsen.

Built with a steel hull and aluminium superstructure, the exterior was designed by a consortium that included Azure Naval Architects, Reymond Langton Design, Zaniz Interiors and Giorgio Cassetta. The sleek, minimalistic interior is the work of London-based Zaniz Jakubowski, of Zaniz Interiors.

Many of the guest bedrooms have the same levels of luxuries and amenities as the master suites of other superyachts. Fraser Yachts

One of the yacht’s multitude of jaw-dropping features includes a state-of-the-art health club with drop-down hull doors that open it to the sea on three sides. It features a steam room, gym, and cold plunge pool maintained at an invigorating 4degC.

Need to swim laps? In the beach club is a 30-sqm counter-flow pool that, at the touch of a button, can convert into a dance floor.

Other standout features include a conference room, hospital, moon lounge for star-gazing, cigar room, and a commercial-grade helipad for a Bell 429 or similar with its own refuelling and foam fire-fighting station. And to launch the multitude of tenders, jet skis, rescue boats and nautical toys, there are no fewer than 12 cranes on board.