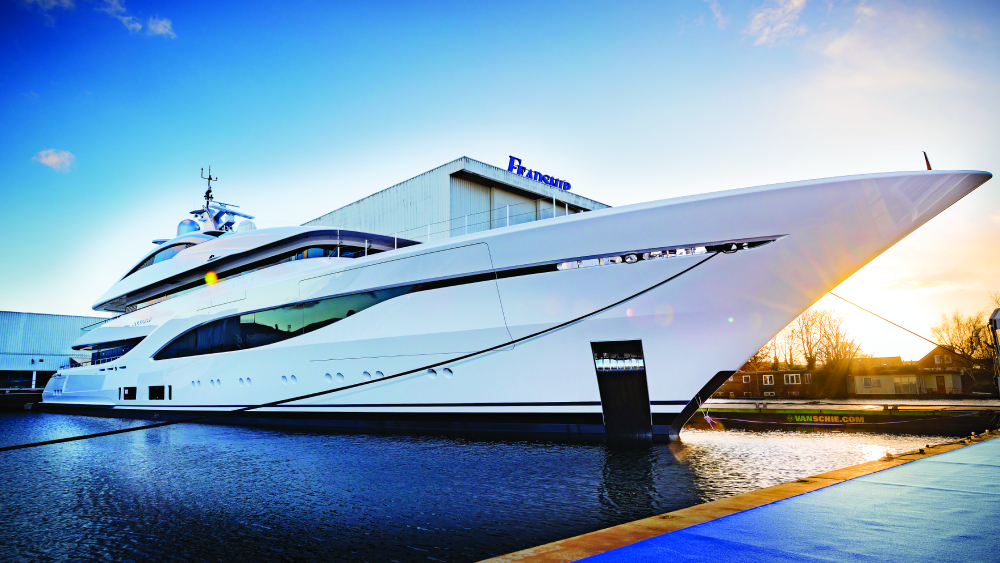 The aptly named boat has a trailblazing, streamlined silhouette.

With a simple but dramatic exterior defined by sharp, angular lines, compressed space between the decks and a razor-like bow, Feadship’s new 75-metre creation presented little challenge when it came to a moniker. At launch, the owner made a point of its profile by naming the yacht Arrow.

“She’s a trailblazer, with a cutting-edge design that is very much the face of this period of the 21st century,” noted Feadship director Henk de Vries during the christening. “She is also an exceptional family yacht, quite possibly the best we have ever completed.”

London-based H2 Yacht Design paid particular attention to details such as low glass railings, wide gangways and the hot tub with a custom mosaic pattern. Such granular consideration extends to the varnished teak furniture, which is elaborately accented and surrounded by backlit marble.

The owner, whose only previous watercraft was a 10-foot dinghy as a child, was clearly emotional upon delivery. “This is actually my first real boat,” he told the assembled guests. “I have, however, seen many other people’s superyachts and have to say that Arrow is the most beautiful and amazingly executed of them all.”

Jonny Horsfield, who led the H2 design process, wanted to create a “contemporary, fresh” profile. “The surfacing and shapes of the yacht are quite complex,” he says. “At the same time, it’s very clean and flowing. I’m a car designer by training, so proportions are important. We’re fortunate Arrow’s owner didn’t want too much of a superstructure and didn’t push to use every square foot of the interior.”

The absence of the usual top deck also gave Horsfield and his team the latitude to create a sleek, uncluttered profile. “We’ve designed some accommodation hidden in the upper arch, so they can still use the upper deck,” he explains. “But it’s a more subtle design than you see on most yachts her size.”

Horsfield is also pleased with the name selected. “It suits the overall styling, especially the way the windows are shaped and move forward into the pointed hull,” he says. “We even created a logo for it that looks like an abstract arrowhead.” Although not confirmed as of press time, the superyacht is expected to debut to the public at the Monaco Grand Prix in May.