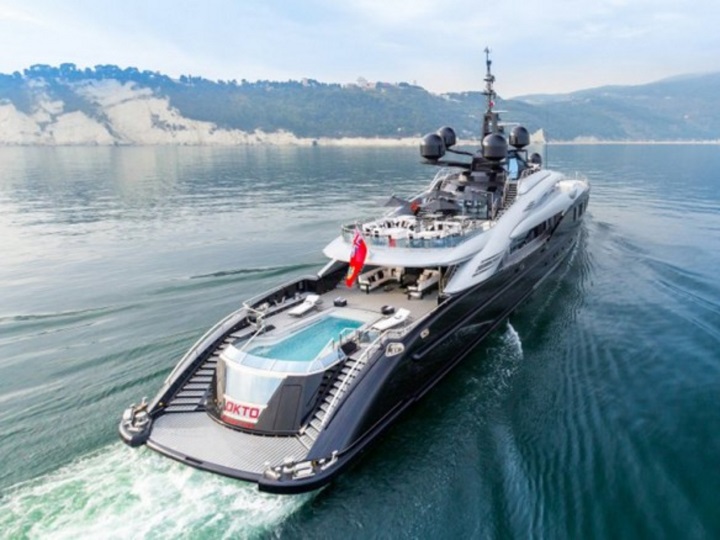 Charter one of these to arrive — and stay — at the F1 or Cannes Film Festival in style.

This May, droves of film connoisseurs will journey to France for the famed Cannes Film Festival (May 17 to 28), while Formula One fans will gather in neighbouring Monaco for the Grand Prix (May 25 to 28). Charter one of the following yachts to arrive — and stay — at the events in style. A-List treatment need not be limited to the red carpet. ISA Yacht's _ Silver Wind _ — the first yacht in the world to use water-jet propulsion powered by a diesel-electric system — offers a slew of VIP accommodations that will make guests feel like stars.

Decorated throughout with Hermès silk wall panels, Lalique crystal, and ebony-and-Canaletto-walnut accents, the 43.5-metre yacht is worthy of the big screen. The split-level master suite connects to a wellness room via a secluded staircase, while the guest rooms showcase golden tiles and bespoke mosaics for added appeal.

Outside, guests can lounge on large sunpads, sip cocktails at the bar, or dine at a covered table as they watch the Grand Prix from the top deck. Accommodating up to eight guests, the yacht can be chartered for around $US147,000 (about $A194,700) per week. (camperandnicholsons.com) Stone steps lead to an elevated pool area where guests can soak and suntan as they enjoy a bird's-eye view of qualifying rounds and practice sessions. Movie buffs can opt to spend their days in the lavish indoor cinema.

The yacht's stately interiors showcase a sweeping staircase and exotic wood and mother-of-pearl accents. Other highlights include a waterfront gym, a steam room, and spacious decks. (camperandnicholsons.com) Live like royalty aboard Sunseeker's _ Princess AVK _. Launched in January 2016, the 47-metre cruiser can sleep up to 12 guests in six staterooms.

The full-beam master suite and two VIP double staterooms are equipped with floor-to-ceiling windows that overlook the ocean. Outside, balconies unfurl from both sides of the main deck to kiss the ocean, and French doors in the lounge open to a fold-down terrace.

A swanky outdoor seating area offers space to lounge, while a dining area, bar, and hot tub round out the alfresco amenities. The water-toy arsenal includes wakeboards, jet skis, and a flyboard, and the beach club features a shower and sauna. Charter the yacht for around $US236,000 (about $A312,600) per week for the ultimate VIP service. (camperandnicholsons.com) Built by Dunya Yachts in 2013, the 72-metre _ Axioma _ superyacht has it all. The Alberto Pinto–designed interiors include a double-height main saloon (with a plethora of couches, chairs, and coffee tables), a gym, a massage room, and a steam room.

Accommodations for up to 12 guests are available in a master suite, VIP suite, and four guest double cabins. And a 3D cinema on the lower deck rivals the glamorous feel of Cannes.

Outside, an infinity swimming pool is positioned on the main deck. A hot tub with a swim-up bar, a barbecue, an outdoor shower, and an alfresco dining table provide additional opportunities for outdoor entertainment. Weekly rates start at around $US627,000 (about $A830,600). (ypigroup.com) Sleeping up to 12 guests, the 54-metre pleasure craft (built in 2006 and refit in 2016) guarantees a good time for everyone on board. Outfitted with everything from flat-screen televisions to glass-encased wine racks, the yacht is an ideal place to unwind after a full day at the movies or race track.

Inside, crisp white interiors are accented by deep blue furniture and plush couches. Outside, the deck (equipped with couches, gym equipment, a hot tub, a dining table, and sunbeds) provides panoramic ocean views. With an aggressive-looking black exterior, _ Okto _ makes quite an impression on the water. The nearly 65-metre vessel (which was built by ISA Yachts in 2014) can house 10 guests in five well-appointed cabins. The layout includes a formal dining room, a plush media lounge with a giant television, and an owner's suite with a fold-down private balcony.

The yacht's standout feature is its nearly 6-metre infinity swimming pool, which can be heated or cooled according to guests' preferences. The pool is ringed by double staircases that lead to a sizable swimming platform.

Best of all, women won't have to worry about removing their shoes after a fancy night on the red carpet, since the decks were specially designed to accommodate high heels. _Okto_ can be chartered for around $US421,000 (about $A557,700) per week. (y.co) Capable of traveling at up to 25 knots, Heesen's _ Jems _, from around $US126,000 (about $A167,000) per week, will help speedsters reach their desired destination in no time at all. And the 44-metre yacht is stocked with amenities that will pamper guests along the way.

The interior is characterised by laidback lounge spaces, large glass windows, and colourful artwork. Outside, a screen can be erected in front of the hot tub to create a cinema experience under the stars. Additional accoutrements include a full gym, a large number of water toys, and an outdoor bar. (y.co) Feadship's _Harle_ is a stately ship that recalls the glamour of Old Hollywood. Built in 2007, the 45-metre cruiser features floor-to-ceiling windows and spacious rooms that funnel outside.

The superyacht can house 12 guests among a master room, two double staterooms, and two twin staterooms. In addition to a hot tub and wraparound bar, Harle features a gym outfitted with a treadmill, weight bench, weights, and yoga mats.

Weekly rates for _Harle_, which is already booked for Monaco but still available for Cannes, start at $US240,000 (about $A318,000). (northropandjohnson.com)