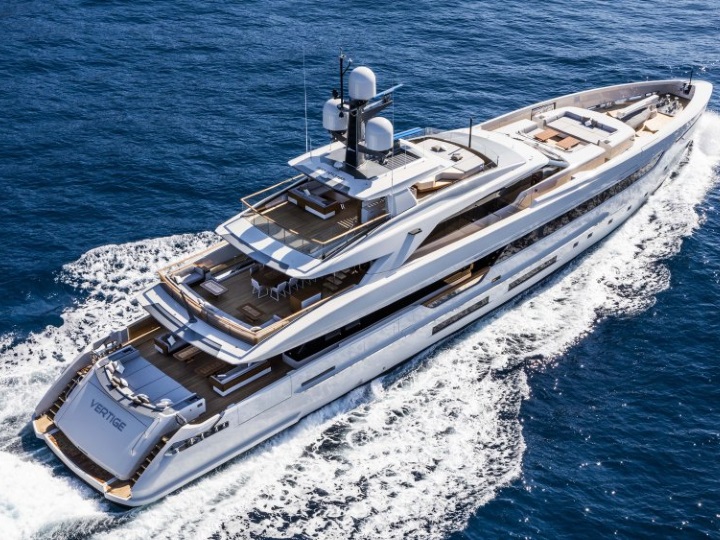 The order was clear but daunting: Create a ‘perfectly balanced, fluid, and timeless’ design that looks like nothing else on the water.

When yacht designer Francesco Paszkowski received his marching orders for a custom 165-foot (50m) motor yacht, they were clear but daunting: Create a perfectly "balanced, fluid, and timeless" design that looks like nothing else on the water. Oh, and be sure to include many features found on much larger yachts. Tankoa 's Vertige is arguably one of Paszkowski's finest designs. The 50-meter yacht, with its plumb bow and sleek profile, is certainly one of the best lookers in the class of 2017, but the interior by Paszkowski and Margherita Casprini is where _Vertige_ leaves its classmates behind.

First, the yacht has six staterooms instead of the usual five, including a master suite and owner's cabin on the main deck, with four VIP suites on the deck below. The owner's suite has two fold-down balconies, unique in this size boat, along with a sizable lounge area that sits beside the starboard balcony for a true seaside experience. A walk-in closet, generous en-suite his-and-her bathroom, and separate desk complete the suite. Just aft, the large master suite has the same features, minus the balconies. This is the first 165-footer (50m) with two master suites on the main deck, which offers a connection for the owner's family. Also on the main deck is the luxurious saloon with a separate dining area. The French owner told Paszkowski he wanted "permanent visual contact" with the sea, no matter where he was on the yacht, so the designers incorporated floor-to-ceiling windows and exterior cutouts in the bulwarks for uninterrupted views of the water. They also used a combination of light-coloured woods and furniture in the saloon, with dark-hued panels on the ceiling. The dining table lends a formal feel to the space. Other noteworthy features include the huge deck area on the upper deck with a dining table for 14 guests and sofa for 20 people. There is also a 7-metre tender garage, a home cinema in the second upper saloon, and a gym in the beach club. Paszkowski made sure to create entrances and passageways that would ensure easy movement for guests, without interrupting the crew at their daily tasks. In the yacht's first sea trial, _Vertige_ reached its top end of 16 knots. The boat is expected to have a range of 8000 kilometres at 12 knots. This is the second ground breaking custom design in two years from Genoa-based Tankoa, and like the first, _Vertige_ promises to be very well-received by the yachting world. The yacht will make its public debut at the Monaco Yacht Show.

The epic vessel should be in action later this year.

Why This 140-Metre Megayacht Concept Rocks

The design was inspired by the natural curves of pebbles.

Two boatbuilding conglomerates have banded together to out-bid two others for the cherished brand.

The distinctive metallic hull has many positive functions beyond aesthetics.

Cotton, feathers and hemp are used instead of leathers and woods, while non-reusable eggshells mimic coral and pearl on walls and tables.

With two hot tubs and space for 10 guests and two tenders, Mr Hunt is ready for adventure.

The delivery from Tankoa is en route to the Côte d’Azur where she will spend her first season.